With the thought-to-be-deceased Echo recovered by Anakin, Rex and the Bad Batch, ‘On The Wings of Keeradaks’ doesn’t lose any momentum as the group fight their way through the entire episode from Separatist forces. The action remains fresh as the situation constantly changed with some pretty impressive visuals once again with all the chaos that unfolded. Though light in character moments, the third episode of The Clone Wars‘ final season delivered a ton of tense excitement.

Little time was wasted right from the start as it picked up moments after ‘A Distant Echo’ left off. For an episode so heavily reliant on action, the various set pieces were quite unique from each other, adding some nice variety to what could otherwise have been a repetitive story. Whether it was the team getting trapped on a thin walkway, the aerial chase or the defence of the village, the action was always changed up and utilized the characters in the best way possible. The Bad Batch again displayed the formidable team they make while Anakin did some fairly cool Jedi combat. Everyone got a moment to shine throughout the action sequences. 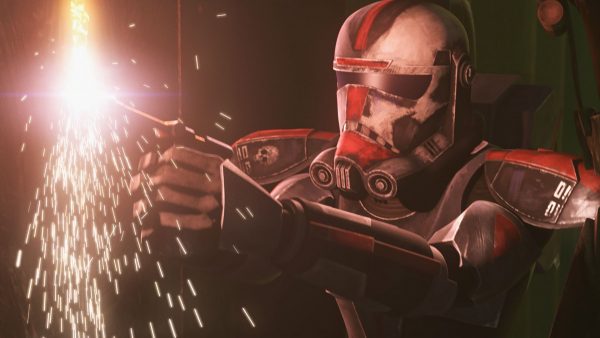 While ‘On The Wings of Keeradaks’ was heavy on the action, there were some good character moments sprinkled in the story. Rex’s compassion for Echo was touched on nicely and Dee Bradley Baker did a great job showcasing Rex’s concern for Echo’s well being as well as highlighting how different Echo is after his ordeal. And though Anakin didn’t get much time with Echo, the one or two moments they shared showed how attached Anakin was to those under his command and the relationship he and Echo cultivated. The episode could have used a little more character moments like that, but it also may have distracted a bit from the story’s tension-fueled chase.

The animation was again well done during the action sequences. There was a clear fluidity to the character’s movements and the choreography in the battles was thought out well. Nothing got lost in the shuffle of all these characters working together, making each action beat concise and easy to follow. It was again impressive in how different each action sequence was both in look and feel with some gorgeous imagery to boot. From the orange of the sky to the rusty red of the planet’s surface, there were some very vivid colours on display.

Though ‘On The Wings of Keeradaks’ was light on character development and much interactions with Echo, it was still an exciting episode with a lot of great action and well animated sequences. It is just a reminder of how well The Clone Wars excels with its action scenes when it really goes all out in delivering something new and brutal to the show. It certainly highlighted the emotion as the team tried to bring Echo home with the clone trooper seeming a bit more like himself with each passing minute. With next week bringing the ‘Bad Batch’ arc to a close, hopefully we’ll get more of a balance between the action and characters as Rex tries to complete his personal mission and save his old friend.