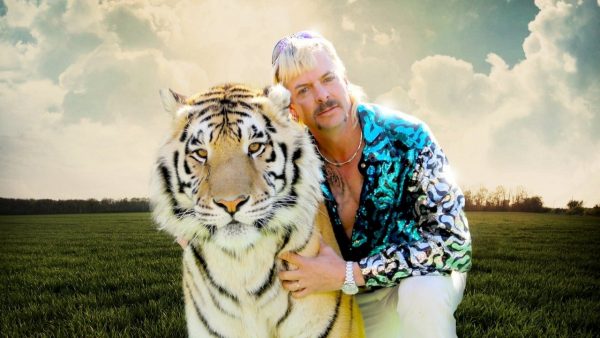 Joe Exotic, the eccentric subject of Netflix’s hit true-crime series Tiger King: Murder, Mayhem and Madness, is a man of many talents. Be it big cat breeding, 80s hairstyles or blowing things up in increasingly ludicrous ways, Exotic (aka Joseph Maldonado-Passage, aka Joseph Schreibvogel), who is currently serving 22-year prison sentence for attempting murder-for-hire, has emerged as a figure of unlikely popularity during a time of great global trepidation and uncertainty.

But of all his quirky side-gigs (presidential candidate included), it’s his musical offerings — the work of Joe Exotic, aspiring Country star — that are arguably the most peculiar, and certainly the most surreal.

Songs about cats, family and politics are each set to the distinctive twangs of southern strings (although recent reports indicate it’s not him doing either the singing or strumming). And accompanying each track is an equally kooky music video, many directed by Exotic himself, filled with felines and firearms aplenty.

Here, for your audio-visual pleasure, we rank the songs (and videos) of the Tiger King himself, Joe Exotic…

“96 Elephants” is just about everything you’d expect from a track in which Joe Exotic chucks in his two cents about the issue of animal poaching. In reference to the number of elephants tragically killed each day for their ivory, “96 Elephants”, sang from the perspective of an elephant named Luke and featuring a bloke called Tim, is a blunt outcry deserving of the subject matter. Or, it certainly would be, were it not undermined by some wobbly lyrics —“we can take on every animal God made; except the animal in man” — and a video that sees Exotic atop a huge pachyderm. As you do.

Although it’s a heartfelt number dedicated to his father, this song doesn’t really make a lick of sense. Lines like “the sun says I’m in love with you” and “they’ll put me in a coffin; but by noon I’ll be golfing” do little to help matters.

A personal, if somewhat subdued ode to ex-husband John Finlay, a reigned-in Exotic plays things a little too safe in this slushy, mournful ballad. In what becomes something of a recurring theme throughout his work, frolicking in the snow-covered woods of Oklahoma takes precedent in the video.

On the surface, a song about child abuse, dedicated to “All Children Abused or Misplaced”, should be a heartfelt, meaningful ode packed full of emotion and sympathy. As it is, Joe Exotic finds a way to make this slow, twangy ballad all about himself.

The self-proclaimed eponymous overseer, “showing love for every hurting son; showing love to every little girl”, Exotic is seen in the video standing moodily on a bridge above a busy highway, sporting various looks that jump randomly between a cap-wearing priest, a shirtless biker, and Michael Jackson from “Thriller”.

There’s a touching message buried in there somewhere, but everything about this is just plain weird. Even by the Tiger King’s standards.

“You Can’t Believe” feels like a proper Country ballad: a sorrowful song that sees Joe pay tribute to Terry Thompson, a fellow exotic animal lover who, in 2011, released dozens of tigers, bears, wolves and monkeys outside the city of Zanesville before turning a gun on himself.
“You can’t believe all you see; you can’t believe all you read.” If nothing else, it’s a song that’s pretty apt for our times.

This moody, slow Tiger King ballad is probably best heard staring out a 2nd floor window when rain is pouring outside, and the droplets are meandering down the glass like tears.

A contemplative number about love’s power to liberate (carrying every bit of irony given Exotic’s multitude of caged animals), the song’s ghostwriters leave no generic stone unturned as this politically charged track features sincere voice overs, lyrics like “do you ever wonder about the thunder?” and a terribly acted music video that has animals being taken away from their sobbing owners by forceful authorities.

Despite an accompanying video utilising the kind of green screen wizardry you might find in a Tommy Wiseau movie, “Alisa’s Memory” is actually quite moving.

A tribute to his former husband John Finlay’s late cousin who sadly passed away from breast cancer, the nearly 9-minute ballad is packed full of neat, if slightly left-field personal references. Think baking a rainbow cake, holding a baby lion, and going through a drive-through on a horse. Hopefully not all at the same time, though.

This might just be the Joe Exotic brand of breakup song. A pulpy, pop-tinged country number about a love turned sour, the song itself is a pretty unremarkable one. It is, however, almost single-handedly salvaged from the realms of mediocrity by a video that jumps between images of Joe once again taking to the snow to play around with a (much younger) cowboy-clad fella, and images of his body laid out in an open casket in the middle of a field.

No, not a hilariously uninformed car rear bumper sticker, but, in fact, the lyrics to perhaps the strangest addition to Joe Exotic’s entire musical back catalogue.

Likely released to coincide with his plucky presidential run, “Pretty Woman Lover” goes above and beyond to hammer home Joe’s seemingly irresistible appeal to women of all shapes and sizes, despite the fact Exotic is gay and, at the time of release, had two husbands.

As a song, it’s beyond odd. As a slice of satire about toxic masculinity, female objectification and troubling hyper heterosexuality, it’s a doozy.

A touching tribute to his late brother, “GW and Me” has got slow guitar goodness in abundance. It’s a simply constructed track with a simple, heartfelt message at its centre. And there really isn’t a whole lot else to say.

If “How Was I To Know” is Joe Exotic’s take on a breakup song, then “I Can’t Believe This Feeling” is his falling in love song. The two tracks appear intrinsically linked, not least by the fact both videos feature the same actor (and even some of the same footage) looking equally bored as Exotic pelts snow in his face.

Teaming up with Dustin Whitson (yep, us neither), “I Can’t Believe This Feeling” sees Joe dabble in a spot of AutoTune as this pulpy, same-sex pop number plays out over cross-cuts of Joe frolicking in the snow (again) and gazing longingly out over the Oklahoma wilderness.

“Because You Love Me” is the unofficial narcissist anthem. Everything great — and, let’s face it, everything not so great— about Joe Exotic gets turned up to eleven in this upbeat banger about how everyone loves this eccentric, animal-loving, polygamous gay icon.

“Because you looooooooove me” sings Joe as he waltzes through his private zoo, shirt unbuttoned halfway, mullet blowing in the wind, gun nestled in its holster as he shakes hands and tickles the back of young kids’ necks. And an appearance from a camel. Win-win.

Things get deep in this honest, reflective, sombre ballad that sees Exotic gaze pensively back over his life. “This is My Life” touches on Joe’s battle with cancer, as well as the gratitude he feels towards his friends and lovers. “This is their song” he soulfully wails: a touching, poignant statement when one considers the events surrounding the tragic death of former husband, Travis Maldonado.

Still, Exotic can’t help but lay the cheese on thick in the video, in which, sat on the edge of a wooden pier, he gazes out over a lake in a manner that any mid-noughties high-school teen drama montage would be proud of.

This schlocky toe-tapper — one that wouldn’t look out of place playing out over the opening credits of a cheesy 90s family sitcom — is almost always gloriously at odds with the violent message at its centre.

With a music video that couples images of Exotic brandishing various firearms (and casually blowing up crash dummies with explosives) and his adoring fans waving merrily into the camera, with lyrics like “bring on the media; the right wing; or the left wing; or anything you wanna bring”, his manifesto is crystal clear: unite with me in my cause, or I’ll shoot you in the face.

It’s about as subtle as that dastardly camel chewing away at his cap throughout.

If there’s one thing Joe Exotic can’t do (aside from a successful murder-for-hire, it seems), it’s subtlety. In “Here Kitty Kitty”, his little ditty that unashamedly takes aim at arch-rival Carole Baskin, Exotic makes abundantly clear his stance on the rumours she killed missing husband Don Lewis and fed his remains to the tigers.

In the video, Exotic dons a preacher’s outfit and large cowboy hat while a creepy Carole look-a-like, decked out in leopard print clothing and flowery head piece, feeds bits of meat to a big cat through the bars of a cage.

“If you’re ever down in Tampa on a big cat refuge, don’t pick a fight with your wife” he sings. It’s both a searing jab at his equally feline-obsessed nemesis, and also generally quite sound relationship advice.

This is a succulent, prime cut of beef. In every sense of the word.

“Here Kitty Kitty” might well be the diss track of the decade, but “I Saw A Tiger” is Joe Exotic’s true musical magnum opus.

If it were written by anyone other than Exotic, the Tiger of “I Saw A Tiger” would most likely be entirely metaphorical. But no, here it’s literally and unashamedly about big cats. Dedicated solely to his unflinching, and slightly unhealthy, love of felines, the song that aptly plays out over the closing frames of the series’ final episode represents everything Joe Exotic is: an animal fanatic, a fur(r)ious fashionista and a man who inadvertently contradicts himself at every turn with lyrics like “let them run the jungle; let them roam their land” while gloating about his very own massive zoo.

But rarely has cognitive dissonance looked and sounded this good.

Tiger King: Murder, Mayhem and Madness is available to watch now on Netflix.