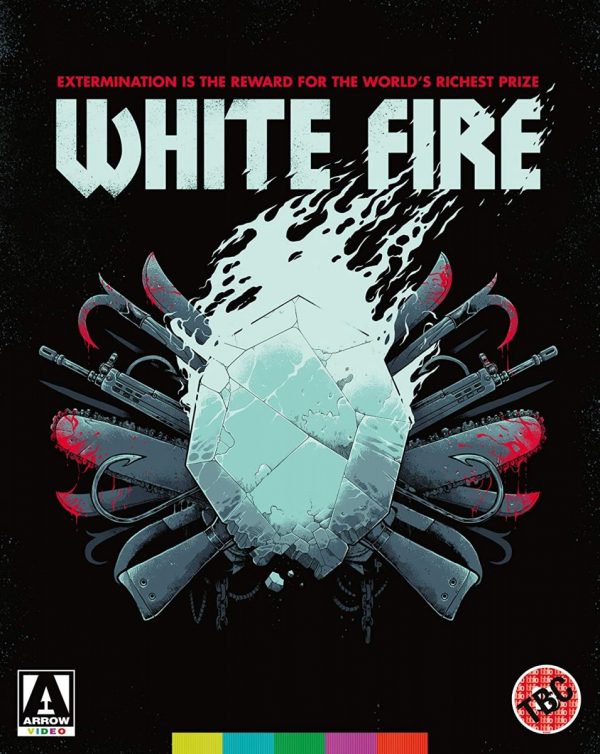 Brother and sister diamond miners go on the hunt for a legendary diamond, alongside several other criminal gangs. 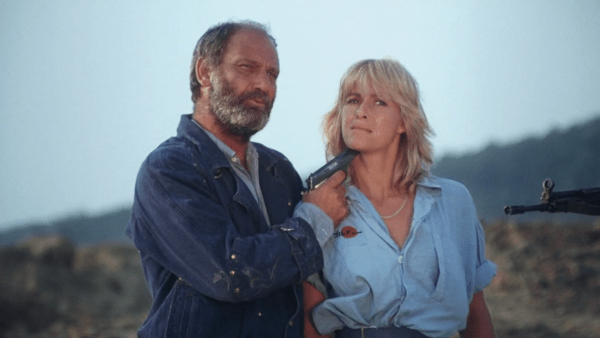 “It’s a bad film that’s good” says actor Fred ‘The Hammer’ Williamson in the special features of White Fire, a Turkish/French production from 1984 given a modern makeover by Arrow Video, and he is correct, although he negates to mention strange, weird and totally bonkers.

Directed by French filmmaker Jean-Marie Pallardy, whose previous credits include Emmanuelle Goes to Cannes, Emmanuelle 3 and Kiss Me with Lust – just so you know where he is coming from – and starring former American football star Fred Williamson (Vigilante/From Dusk Till Dawn), Robert Ginty (The Exterminator) and Belinda Mayne (Alien 2: On Earth), there is no denying that White Fire is mostly going to appeal to a certain audience who crave their violence bloody, their romance exploitative and their dialogue written on the back of a beer mat during a production meeting, and White Fire delivers on all fronts in spectacular fashion. However, what you get out of it depends on how much nonsense you are willing to put up with. 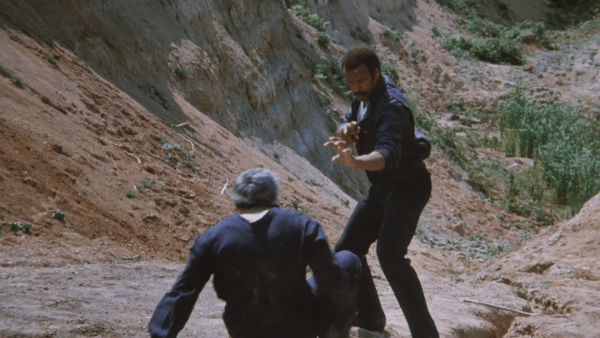 Ginty and Mayne play Bo and Ingrid Donnelly, a brother and sister who saw their parents gunned down when they were children and were taken in by Sam (Jess Hahn – The Man From Chicago), whose actual job or how he came to rescue them that day is never made clear but if Bo and Ingrid were angels, he’d be Charlie. Anyway, now grown up Bo and Ingrid work for a diamond mining company in between doing jobs for Sam, and it has come to their attention that the mythical white fire diamond has been discovered in a cave so the three hatch a plan to retrieve it.

Unfortunately for them there is also a gang of Italian criminals after the diamond and during a conflict Ingrid is killed, which hits Bo hard as he and Ingrid appear to have been having an incestuous relationship. Fortunately a solution is at hand as Olga (also played by Mayne) comes into the scene and joins Bo and Sam by having a haircut, a fake tan and telling everyone she is Ingrid. It also means that Bo can sleep with her without any guilt, not that he seemed to have any when it was his actual sister, and the adventure continues as the now rejuvenated trio go after the diamond against the Italians, Bo’s shady boss at the diamond mine and Fred Williamson’s Noah Barclay, a pimp looking for Olga, one of his ladies who ran away. 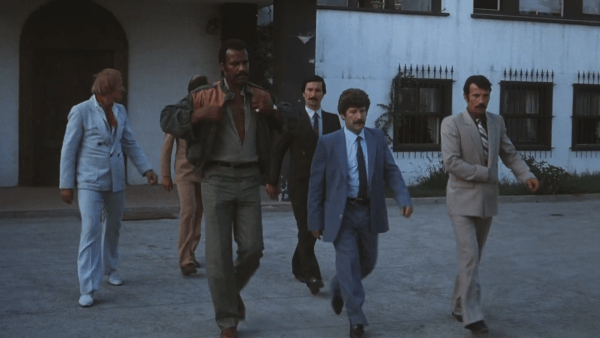 So there is a lot to unpack when it comes to White Fire but talking or writing about it doesn’t do the utter insanity of it justice – you really have to see it in action, and there is a lot of action as one violent set piece after another is thrown at the screen as a seemingly unlimited number of moustachioed goons come after Bo and Ingrid, all to be fought off with any weapons that come to hand, including the highlight of Robert Ginty wielding a chainsaw and carving up some red shirts.

Ginty himself is an odd choice as the lead in a move like this, despite his signature role as a Vietnam vet gone mad in The Exterminator but in that movie he plays a regular guy who has seen bad things and gets pushed to the edge. Here he seems to be some sort of working class James Bond-type action hero whose puppy dog eyes, porn star moustache and neatly coiffed hair lend him the air of a bank manager who is also handy with his fists, although his regular guy looks do help accentuate the sexual deviant behaviour of Bo and make his strange casting make some sort of sense, if sexual deviancy is what you’re going for, which Jean-Marie Pallardy clearly was. 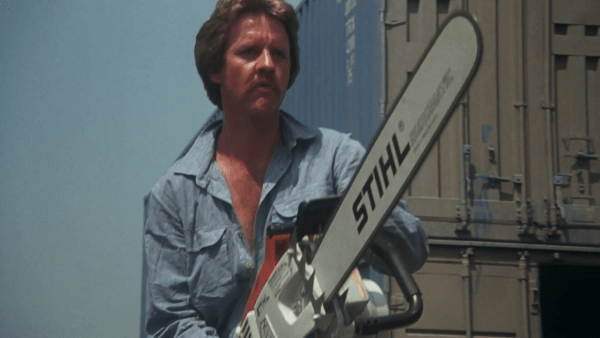 But luckily Fred Williamson is on hand to add the much needed machismo at nearly an hour in and, after a bit of a lull where Bo gazes at his naked sister as she towels herself off, tells her he wishes she wasn’t his sister – although that doesn’t look like that little detail would stop him – and then meets Olga, the movie smashes, bashes and punches its way to its final act where everyone is after the mythical diamond (which has apparently sat in a clearly mined cave for millions of years without anyone noticing) and bullets and dynamite are flung about in the same way that every action/grindhouse genre trope is flung about, some of them sticking, most of them not but by then the director seemed to have given up applying any restraint so why should we apply any logic?

You could go on all day listing what is wrong with this movie and trying to find answers to all of the questions it throws up but, as previously stated, you really have to see it for yourself. Coming backed with an informative commentary by author Kat Ellinger, interviews with Fred Williamson, writer/director Jean-Marie Pallardy and editor Bruno Zincone, White Fire is very much an oddity when it comes to plot and direction but if the low-brow action of those 42nd Street grindhouse classics from the 1970 and early ‘80s is your thing then there is plenty to enjoy here, although the title song quickly loses any appeal it may have had by the fifth time you’ve heard it. You can also bet that Quentin Tarantino and Robert Rodriguez have watched this movie at some point, although their stylised bad dubbing, choppy editing and nonsensical plot choices were deliberate whereas White Fire is the real deal.