Ricky Church on the legacy of Star Wars: Episode V – The Empire Strikes Back…

When Star Wars was released in the summer of 1977, it changed the face of cinema as audiences knew it with George Lucas’ sci-fi take on the fantasy genre, its imaginative world and brand new special effects. The film went on to become a cultural phenomenon as Star Wars was everywhere, capturing the zeitgeist of audiences across the globe. With such a cultural hit, one would be forgiven in thinking there could be no way Lucas and his crew would be capable of capturing lightning in a bottle twice with the growing franchise.

But then on this date in 1980 saw the release of The Empire Strikes Back, the second film in the original Star Wars trilogy that broke even more new ground for the franchise. 40 years after its release, many hold Empire as the best instalment in the Skywalker Saga for several varying reasons. Empire Strikes Back took the franchise in a bold new direction with its characters, story, themes and, of course, one of the biggest and unexpected twists in all of cinema. It is no surprise the film is regarded as not only one of the greatest sequels ever, but one of the few that arguably surpasses the original. 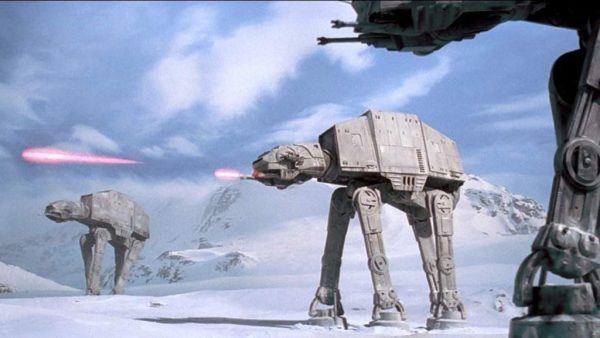 Perhaps one of the greatest elements to Empire‘s legacy is its unconventional story. It took plenty of risks that weren’t the standard for a blockbuster film of this magnitude, especially one that had already cultivated a loyal and devoted fanbase. The big action sequence, for instance, is placed near the start of the film rather than at the end. The main group of heroes are split up for the majority of the film. The main romantic pairing is not between the princess and the lead protagonist, but the renegade bad boy trying to turn over a new leaf. And, most importantly, the film ends with the villains largely succeeding in their scheme as the Rebel Alliance is dealt a decisive defeat, Han Solo is captured and Luke Skywalker loses his hand in his confrontation with Darth Vader and has his whole worldview changed in an instant.

However, where Empire Strikes Back really succeeds is its advancement of its character development and philosophy. As great as A New Hope is, it told a fairly basic fantasy story with a sci-fi twist that followed the traditional hero’s journey and archetypal characters. For the sequel Lucas, director Irvin Kershner and screenwriters Leigh Brackett and Lawrence Kasdan elevated the story by not playing into the typical tropes found in these types of films. Luke is given a much more interesting hero’s journey that sees him take an introspective and philosophical journey as he learns more about the nature of the Force rather than what it can allow him to do. And he learns that through one of the best and most memorable fictional characters ever created: Yoda.

When it comes to the power of the Force, there may be no greater example than the tiny green alien. Yoda is clearly powerful in the Force, but it is not his ability to use the Force that makes him so powerful but rather his wisdom and knowledge of it. Obi-Wan may have taught Luke some of the broader strokes of what the Force is and does, but Yoda teaches him the masterclass by focusing more on the philosophy behind the mystical power. As he tells Luke, a true Jedi uses the Force only for knowledge and defence rather than attack. Indeed, one of the very first things Yoda tells Luke after Luke calls him a great warrior is “wars not make one great” (and that’s while he’s still masquerading in his aloof guise). Yoda tries as much he can to impart on Luke on how he must first understand the nature of the Force to truly master it. “Luminous beings are we, not this crude matter” he tells Luke to emphasize how the Force connects all things through a spiritual rather than physical manner, whether it is Yoda’s small size or his ability to lift Luke’s X-Wing out of the swamp with nothing but his will and mind.

On the opposite side of the spectrum to Yoda is Darth Vader, who is elevated in this film to one of the greatest villains in cinema. Whereas Vader had his hands rather tied in A New Hope, deferring to Grand Moff Tarkin on several occasions, he has no such restrictions in Empire. Whether he’s giving out the orders or choking his officers for any sign of incompetence no matter how small, Darth Vader is truly unleashed in this sequel, putting on display the full scope of his power and evil. It is also clear just how much autonomy he has in the Empire’s structure as not only everyone follows Vader’s orders, but the Emperor gives him a basic objective to capture Luke Skywalker and is content to leave everything else to Vader’s authority. And that’s not even getting into the twist that changed Star Wars forever. The fact that (40 year old spoiler) Darth Vader is actually Anakin Skywalker, Luke’s thought-to-be-deceased father, is one of the most shocking and captivating reveals ever done. It was so unexpected and earth-shattering that Lucas did everything he could to keep it a secret from the crew and cast with only Mark Hamill and James Earl Jones knowing the truth (and Jones’ first reaction to the reveal was to believe Vader was lying). It turned Luke’s battle with Vader into something much more personal than a quest to save his friends and avenge his father, making Star Wars an almost tragic tale. It also added new depth to Darth Vader as he wanted to capture Luke for more than turning him to the Dark Side for the Emperor, but a chance to usurp his master and rejoin his long-lost son, yet doing anything at his disposal to make it happen including cutting off his own son’s hand.

Aside from the story and themes, Empire Strikes Back shows a tremendous growth in nearly every technical aspect of its production. The visual effects, sets, costumes are all on another level than what A New Hope was. Even John Williams raised the bar as his score is among one of the best in his entire career with ‘The Imperial March’ and ‘Yoda and the Force’ the standout tracks. The decision Lucas made to remain an executive producer and have Kershner direct instead was a strength to the film as Kershner brought a new distinct style to the franchise. He and cinematographer Peter Suschitzky created one of most visually stylish films in the whole franchise with every shot looking great. The shot that speaks the most to Empire‘s tone (which also happens to be my favourite of the series) is Darth Vader’s silhouette standing in Cloud City, the fog rising up from the ground with a mix of blue and red light as if Luke has entered his darkest nightmare. Everything about how this film was made is truly excellent.

The legacy of Star Wars: The Empire Strikes Back is one that helped the franchise grow beyond the confines of its original film. Without it, the series simply would not be the same as it is today due its character development for Luke, Han, Leia, Vader and even newcomer Lando Calrissian as well as its philosophical musings on what it means to be a Jedi. The action is intense, Williams’ score even more iconic than it already was and the plot a fast-paced yet character driven story. For all of these reasons, it is why Empire Strikes Back is still considered by many to be the best Star Wars film in the Saga.