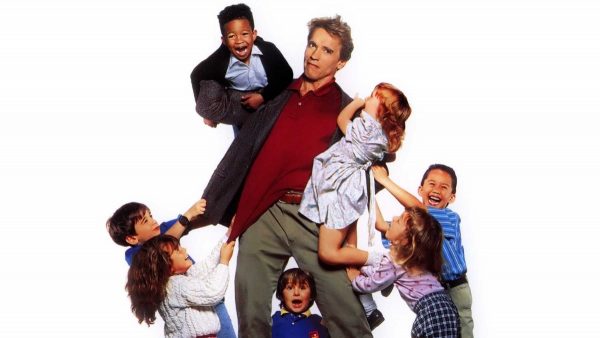 When you think of some of your favourite action heroes of the last 30+ years, we’ve seen them take on all comers. They’ve fought terrorists, criminals, sometimes beings from other worlds, but their toughest opponents have always been children. It kind of started becoming a thing after Arnold Schwarzenegger found himself as a substitute kindergarten teacher in Kindergarten Cop. The film, which begins as an atypical (and atypically violent) Schwarzenegger action film, takes a mid-third turn when Ahnuld is reluctantly forced to take a cover assignment for his more able female partner (played by Pamela Reed). It of course starts disastrously, with a lot of precocious kids telling Arnold about anatomy and letting him know he might have a brain tumour. By the end of the film of course, he’s finally, after great struggle, managed to get the cast of kids into a semblance of order. Plus Arnold has some of his most memorable Arnold quotes here, including ‘There is no bathroom!’ and ‘It’s nahd a toomer (it’s not a tumour).’ 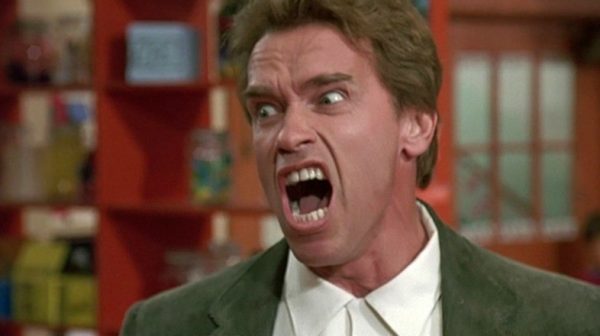 The success of Kindergarten Cop seemed to open a few avenues for other stars to follow suit. Not least in a film many may not even know existed (and those who do have probably already forgotten), but there is actually a Kindergarten Cop 2. Made in 2016, it replaced Schwarzenegger with Dolph Lundgren. Now, if you’ve also seen the likes of Daddy Day Care 2, or Jingle All The Way 2, you’ll know how excruciating these straight to video sequels to moderately successful family films can be. So in all fairness, Kindy Cop 2 isn’t as bad as it had any right to be. It ends up being something of an extending commercial to Twix bars (the blatant, and persistent product placement is spoof level) but actually, it’s sort of entertaining, if not a patch on Arnie’s original (which remains, probably the only genuinely good film of its ilk). Lundgren is game to make fun of himself and look suitably awkward in dealing with his young co-stars. 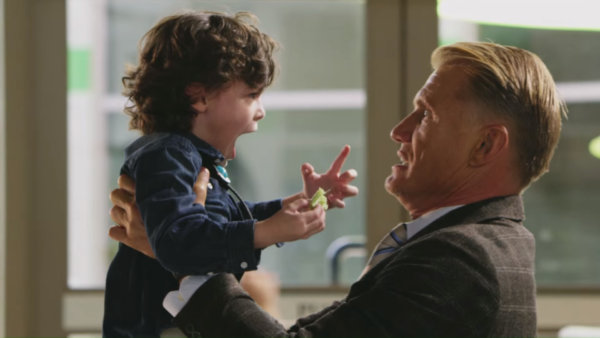 Before Mr Lundgren got in on the act though, a few other guys did the whole big lug takes on children routine. Step forward Hulk Hogan in another of the earlier examples. Hogan to be fair, seemed to do quite a few with precocious kids involved, but Mr Nanny was the most overt riff on a formula Arnie produced in 1990. The premise of Hogan’s film, sees the muscle bound oaf as a former wrestler, hired as a bodyguard to his clients children. Though I suspect someone pitched this on its eventual artwork. ‘How about we see Hulk Hogan in a tutu?’ Thus, Mr Nanny was born (or more succinctly…shat out?). Actually, it’s kind of brilliant, in a bad way and worth watching because Hogan had always been somewhat awkward on screen, even as an action hero, but it’s doubly so in a set up like this. 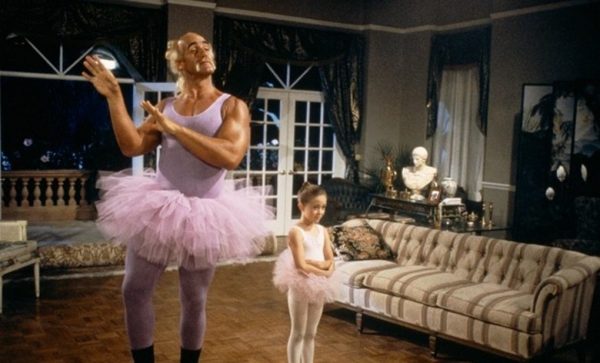 Other wrestlers turned action men would inevitably follow suit. Dwayne Johnson starred in The Tooth Fairy and The Game Plan, seeing him having to traverse the rocky terrains of the man mountain family film. This was at a period of Johnson finding his feet as a box office draw. His PG faze of family comedy/adventure films. These wouldn’t quite click either and it took him shifting gears in the Fast franchise to strike consistent box office gold. Johnson of course has always been an affable on and off screen presence, and was certainly game, and perhaps more naturally engaging with youngsters in some of these films than some of his contemporaries. 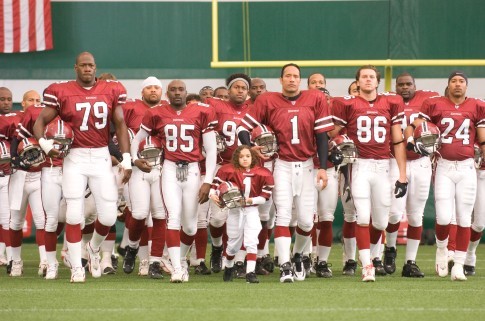 Johnson’s arch nemesis, born from the on set friction of upstaging him in those car films, Vin Diesel also had his brief stab at riffing on Kindy Cop with The Pacifier. Remember that? You probably don’t. It did good business and came at the height of Diesel power, fresh off hitting gold with cars and snowboards (XXX). The film suggested Diesel was perhaps more of a box office pull on his own accord than he might actually have been (a run of duds after, saw him in dire need of souped up cars again). It seemed a fairly routine Disney film, which perhaps hit at the right time. Diesel, like many of his gruff action contemporaries seemed ill at ease, but beyond it being ‘in character.’ 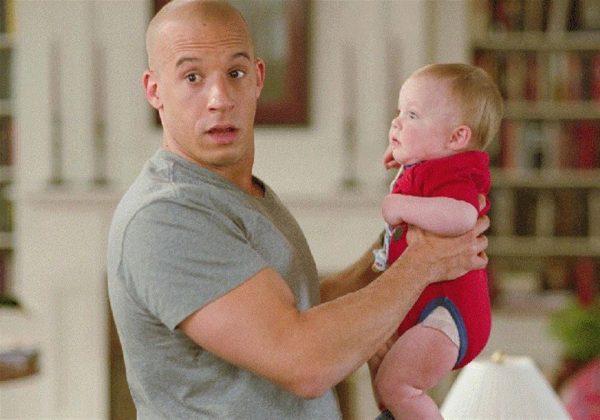 The trouble is, a lot of action guys have historically had a flash of ego about them. Starring opposite another beef mountain? Well, they’ve got to out bench them and win the battle of the biceps. When you’re opposite 10 years olds, you’re back down to Earth. They don’t care what you do and then there’s a big onus to be professional and to work within the constraints that come with working with children. Your biceps become an afterthought (I’m talking like I know about biceps…erm…well, I can only guess). Additionally, the whole remit revolves around making a fool of yourself too, so occasionally scraping the comedic barrel doesn’t always come naturally to an action dude (understandably). 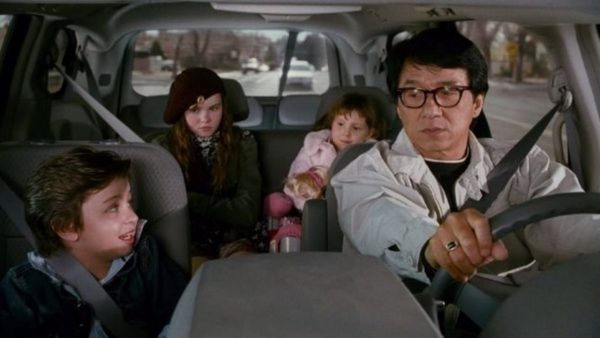 A few years after Diesel’s stab at the genre, Jackie Chan essentially remade The Pacifier with The Spy Next Door. Diesel’s foray was perhaps overall a lot less haphazard, but Chan’s comes across as more enjoyable, if only because of the warmth Chan projects, even whilst struggling through phonetically relaying his lines. Plus, albeit ‘lite,’ the Chan brand of comedic physically dynamic kung fu gave that film an extra touch that made up for some of its struggles. Chan’s natural gift for comedy translated well to the family market, even if the film he was given felt like a tepid reheat of a tepid reheat. 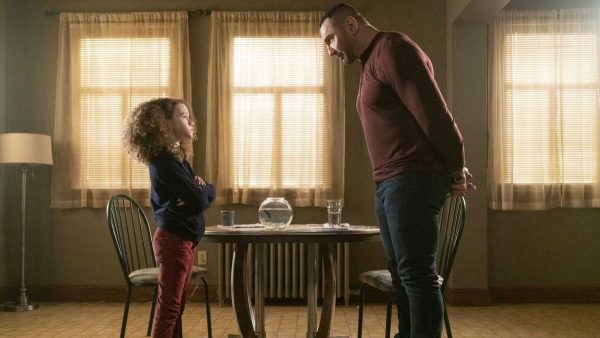 More recently, and having just hit on Amazon Prime, we have Dave Bautista – hot on a hot streak – in My Spy, finding himself dealing with a smart young girl, whilst he’s supposed to be spying on her mother. Big Bautista is one of the more engaging fellows to transition from WWE to movie stardom. He’s got a lot of charisma and he does straight faced comedy very well. It’s like Leslie Nielsen and Lou Ferrigno had a baby. What’s more he’s shown good potential as an actor with a little bit more depth to him, but of course, the Catch 22 is that his physique becomes difficult to cast. He’s more often than not going to be eyed for action orientated affair (sometimes mixed with comedy thanks to his hilarious exploits for Marvel). Johnson has found the same issue. He couldn’t play a regular Joe with in depth human problems, or at least studios don’t see him as doing that. Johnson has progressively found himself retreating (or in part being pushed) to essentially repeating the same role over again. Hopefully he can break out of that and do something Indie A.F, and the same goes for Bautista. How about Dwayne and Dave in a Safdie brothers thriller, with the tension cranked up to 11? It worked for a previously maligned Adam Sandler. 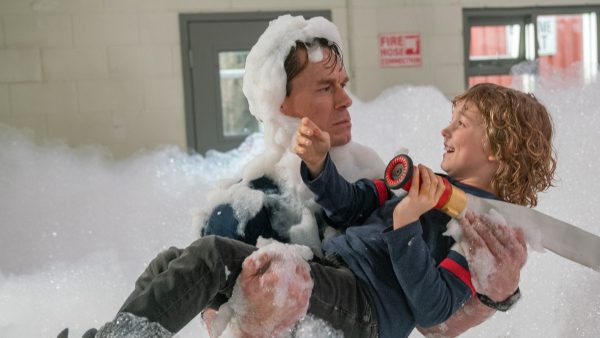 To round out we’ll finish on another Wrassler, and that’s Jooohhhnnn Ceeeeennnaaa (that’s John Cena to the layperson). Last year saw the rising cinematic star, on a bit of a hot streak of his own, finding himself sought for the family comedy gig and he delivered with Playing With Fire. It is of course, as tired and awkward as you might expect that kind of film (and a bit lazy). It’s not a patch on My Spy, which gets by on Bautista’s presence, a set up more in keeping with an action image, and less reliance on low brow gags. So it seems this fad seems particularly popular among wrestlers turned action stars. It’s always a little sub-genre of film I find myself drawn to. Occasionally it’s based on how awkward I think said star may end up looking within the film, but sometimes they do end up entertaining (My Spy), particularly when the star manages to get a rapport with the young munchkins causing him chaos.

What’s your favourite action titan vs kids film? Let us know in the comments or on our Twitter page @flickeringmyth…