Activision and developers Toys For Bob have announced that our spinning orange marsupial Crash Bandicoot will be returning in Crash Bandicoot 4: It’s About Time on the Xbox One and Playstation 4 on 2nd October.  For more than 20 years Crash has been a favourite videogame hero for those who remembered the fun-filled hours on the PS1, and with Crash Bandicoot 4 he’s going to have chance to create a whole new generation of fans.  Meet Crash in the new trailer below… 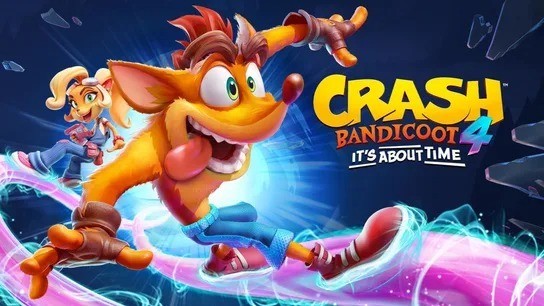 Crash Bandicoot 4: It’s About Time picks up a while after where Crash Bandicoot: Warped finished and finds Neo Cortex and Dr. N. Tropy now free from prison and plotting domination once again. The evil duo have got greater ambitions and this time plan to take over the entire multiverse and it is up to Crash Bandicoot, Coco and friends to stop them.

In order to create a Crash title that is as true an experience as the classics, Toys for Bob played through the original games to get a good feel for the exciting platforming wackiness and the cocksure attitude of the game’s protagonist.  As well as capturing the essence of the classics, the developers will introduce a fresh new art style with new worlds, lush landscapes and a huge variety of enemies and hazards that are out to stop Crash.

A new arrival to Crash Bandicoot 4 are four powerful guardians of space and time known as the Quantum Masks.  These give Crash and his friends the ability to subtly bend reality in order to help them overcome deadly obstacles.

Going by the trailer, Crash Bandicoot 4: It’s About Time is going to recapture the spirit of the original three games rather than the lacklustre offerings from the 2000s.

Look out for this future classic on 2nd October on Xbox One and PS4.