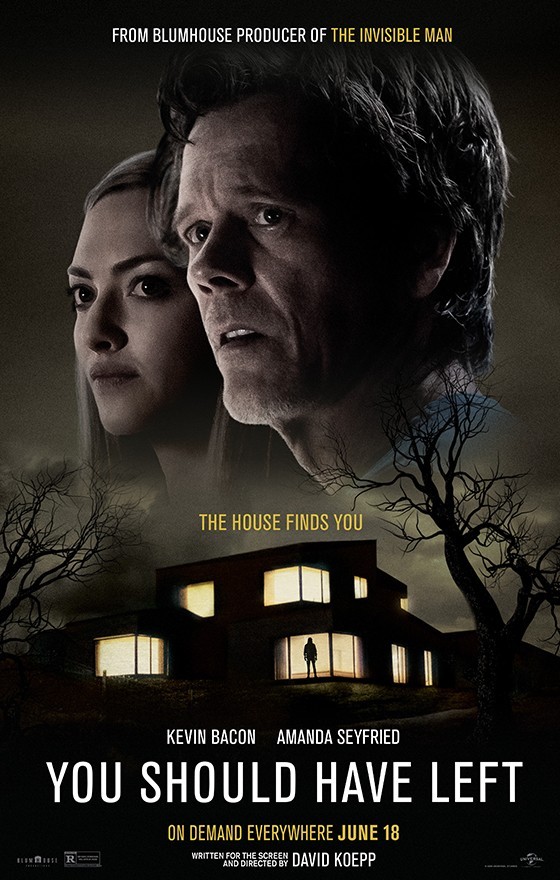 A middle-aged man, his successful actress wife, and their young daughter book a haunted vacation home in Wales that begins to wear down their sanity.

Despite being one of the most successful screenwriters in Hollywood history with the likes of Jurassic Park, Mission: Impossible, and Spider-Man to his name, David Koepp’s directorial output has proven decidedly shakier, characterised by modest success (Secret Window, Ghost Town) and abject failure (Mortdecai).

Koepp adds another disappointing effort to the “no” pile, then, with his self-penned adaptation of Daniel Kehlmann’s 2017 novella “You Should Have Left,” a middle-brow psychological horror flick which at least benefits from reuniting the filmmaker with his Stir of Echoes star Kevin Bacon.

Theo Conroy (Bacon) is a wealthy middle-aged banker enjoying the high-life with his younger actress wife, Susanna (Amanda Seyfried), and young daughter Ella (Avery Essex). With Susanna heading to the UK to shoot a movie, the family first rents out a lush house in rural Wales, which soon enough brings Theo’s dubious past to light in deeply unsettling ways.

Sadly what follows for most of the film’s 93 minutes is an always-watchable yet thoroughly programmatic haunted house romp entirely bereft of scares. Koepp’s attempts to shock aren’t anything you haven’t seen before in countless mediocre genre jaunts, and even when he ventures into disorientatingly surreal territory, there’s a patent lack of imagination on offer. 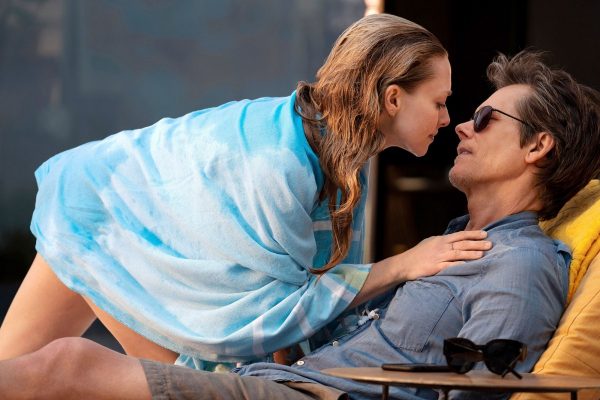 It is, at least, stylishly presented to a point, especially considering its Blumhouse-friendly $4 million budget. The production design department in particular have done a fantastic job with the focal house, which becomes an increasingly confusing labyrinth throughout, while DP Angus Hudson dishes up plenty of gorgeous glimpses of the foggy Welsh countryside.

But there’s just a distinct lack of personality emanating from the movie. Beyond its setting, a few darkly comedic jokes which suggest a self-awareness of genre tropes, and some expected culture clash gags as the wealthy Americans adjust to the speed of provincial Welsh life, there’s very little to distinguish it from any other like-minded movie.

There was certainly potential, though, given that many have noted the near-30-year age gap between Bacon and Seyfried – a fact the film isn’t at all oblivious to. The crux of the character drama revolves around the ambiguous, potentially violent end to Theo’s prior marriage, with Koepp briefly wading in to pass comment on the #MeToo movement and “cancel culture,” even if this is ultimately just a fringe gloss to the supernatural hooey.

What largely keeps things chugging along semi-amiably is Bacon, whose initially subdued and increasingly frazzled performance carries the pic through several otherwise laboured stretches. He’s absolutely believable as a shady man possibly losing his grip on reality, and Koepp sensibly gives Bacon the floor to own these scenes wherever possible. 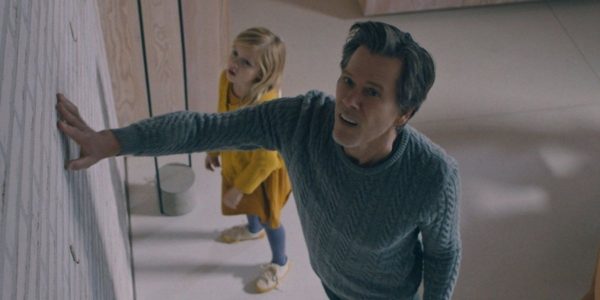 Seyfried is also solid as his spouse, her several bickering asides with Bacon leavening more suspense than any of the film’s actual “creepy” scenes. As their child, Avery Essex acquits herself well in a tricky part, given the sheer wealth of patently unnatural dialogue Koepp forces upon her.

But even with its expected third act ramp-up, You Should Have Left mostly struggles to muster a palpable sense of atmosphere or even basic tension. This is in spite of Koepp’s clear attempt to turn the screws with some twisty set-pieces, ahead of a ridiculous ending likely to invite more laughs than gasps.

All in all, this is far more effective as a straight-up drama than a frothy genre film. It’s not certainly not bad and just interesting enough to maintain attention for its entirety, even if the low-energy approach, full of shopworn horror parlour tricks, amounts to little in the end. For many, though, the cardinal sin will be that it simply isn’t scary.

Timely concerns and solid performances can’t disguise the fact that You Should Have Left is at its core just another also-ran haunted house flick.