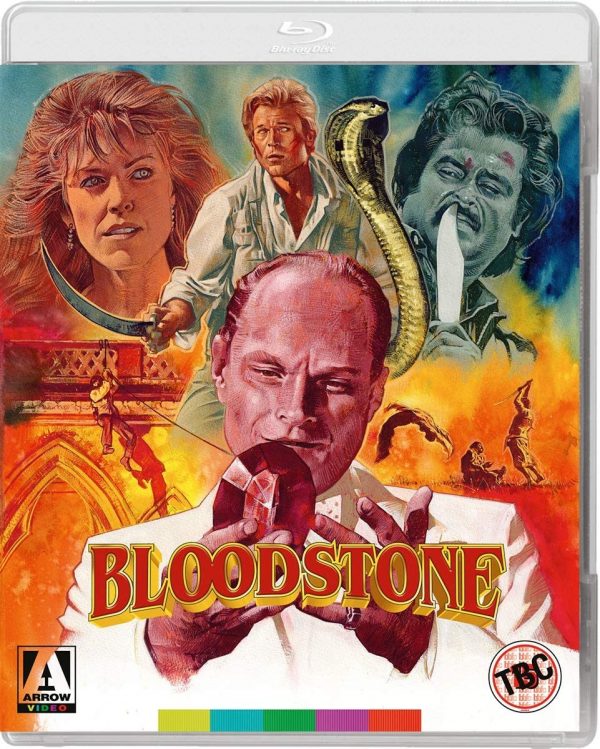 A pair of American newlyweds honeymooning in India get caught up in an adventure involving a stolen ruby, the ruthless criminal who wants it and the bumbling local police force trying to keep up. 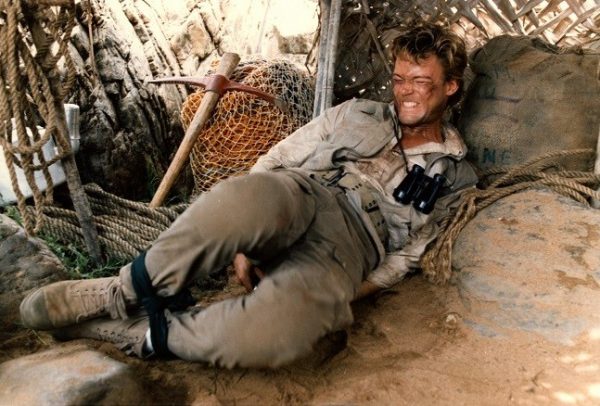 Following Blu-ray releases of The Wind and Blood Tide earlier this year Arrow Video have once again delved into the back catalogue of Greek filmmaker Nico Mastorakis to give another movie he had a hand in making an HD makeover. In the case of Bloodstone, Mastorakis is credited as producer, editor and writer, with directing duties left up to Dwight H. Little (Halloween IV: The Return of Michael Myers/Marked For Death) which should make for some exciting action set pieces given his credentials.

Umm… not exactly. Bloodstone is basically the result of Nico Mastorakis clearly having watched Indiana Jones and the Temple of Doom, Romancing the Stone and Octopussy, and then deciding that it couldn’t be that hard to write a thrilling comedy/adventure set in India. Hell, he could even get one of India’s top action stars of the time to appear in it for added credibility, which on paper was probably a good move as this script could do with as much credibility as it could muster out of its clichéd and hackneyed story about a huge ruby stolen from India by the British in the 18th century. The stone has been stolen back by small-time thief Paul Lorre (Jack Kehler – Lost Highway) who is on his way to return it to crime lord Ludwig Van Hoeven (Christopher Neame – Dracula A.D. 1972) back in India but along the way he meets honeymooning Americans Sandy and Stephanie McVey (Brett Stimely and Anna Nicholas respectively) and, in order to avoid the waiting Indian authorities – headed up by the bumbling Inspector Ramesh (Charlie Brill – Dead Men Don’t Die) – hides the ruby in Stephanie’s tennis bag. 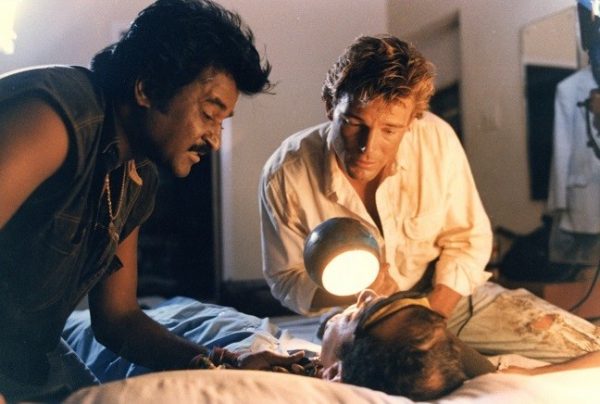 However, during the taxi ride to the hotel the ruby falls out of the bag and remains in the back of the cab driven by Shyam Sabu (Indian action star Rajinikanth), who finds the stone and, after Stephanie is kidnapped by Van Hoeven, teams up with Sandy to rescue Stephanie and, hopefully, avoid getting killed in the process.

A straightforward plot indeed, and Bloodstone is nothing if not a straightforward movie. In fact, it is so straightforward one could call it bland, generic or extremely unexciting, and that is on the more positive end of the scale. Not that there isn’t enjoyment to be had in certain scenes but the laughter is unintentional and, in most cases, uncomfortable as Nico Mastorakis and Dwight H. Little have basically made It Ain’t Half Hot, Mum: The Movie thanks to stereotypical depictions of India and its citizens, and in particular the performance of Charlie Brill as Inspector Ramesh, who spends the entire film wobbling his head and delivering his unfunny dialogue in a cringe-inducing Indian accent; for context, Brill is from New York and clearly not Indian. 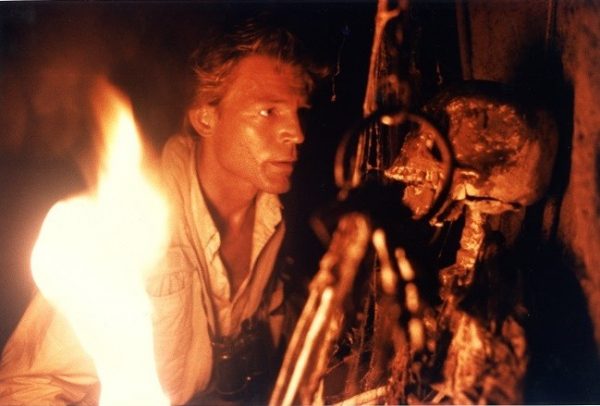 But despite his problematic performance, Brill is not the biggest issue Bloodstone has because at least whenever he is on-screen you are drawn to him, for better or for worse, and what is worse than a misjudged performance is one that is totally bland and devoid of any charisma, and in Bloodstone you get two leads whose performances are so lacking in depth or emotion you would have thought this was their first read through of the script. What makes it worse in the case of Brett Stimely is that he was dubbed in post-production by David Soul as the filmmakers thought that the actor’s natural voice wasn’t macho enough. Doesn’t look good on ol’ Hutch.

However, there are a couple of positives. Christopher Neame may have been the go-to arch villain in a lot of UK productions from that time but that is because he was so damn good at it and he doesn’t disappoint here, although he is sorely underused but when he is on-screen he chews the scenery for all it is worth. The other masterstroke is the casting of Rajinikanth, who may not have the muscle of Stallone or Schwarzenegger, or the dashing looks of Timothy Dalton, but he does have enough charm to have carried the movie himself without needing Brett Stimley to play the all-conquering American hero (badly). Bloodstone was his first English language film and it is a shame he didn’t go on to appear in more mainstream movies as he can clearly do comedy despite his grasp of English not being the best – he had to redo his lines in post-production after getting help from a voice coach – and he does have the acting chops to lift some truly dire material from out of the depths of mediocrity when required, which is quite often. 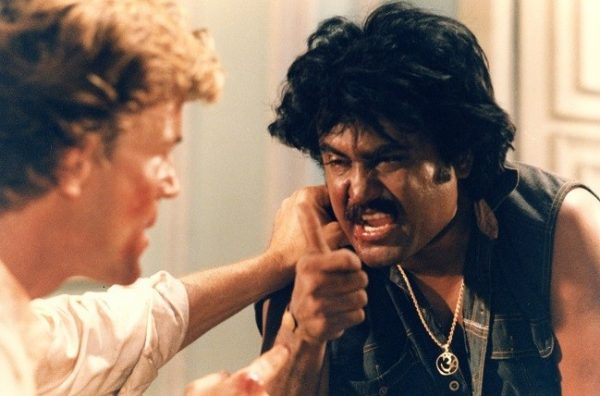 Coming backed with a selfie interview by Nico Mastorakis, which is actually quite fun as he does give a lot of background info, although his perception of how the film turned out may not quite gel with the reality, and a video essay covering the career of Rajinikanth, Bloodstone is awkward from the start and just seems to get worse as it goes on. Had it come out a few years earlier than it originally did you could at least give it the flimsy benefit of ‘they didn’t know any better, that’s just how it was back then’ but Octopussy had already dragged mainstream action movies into the murky realm of outdated cultural stereotypes back in 1983 and by 1988 that sort of thing was well past its sell-by date. But it doesn’t really matter because if you are able to tolerate such nonsense and take the movie in the spirit it was no doubt intended you are still left with an unimaginative and workmanlike adventure movie whose most entertaining parts are, unfortunately, it’s most offensive.