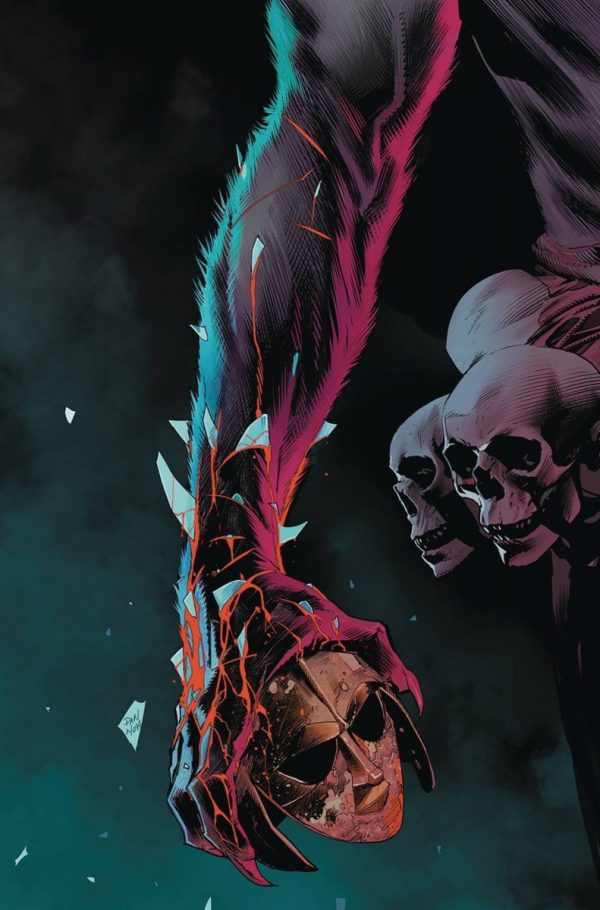 To catch us up on the series, Duncan and his Gran have only recently just started talking again after previous events put some bad feelings between them. Duncan has stepped into his role as a hunter with somewhat ease, and he stands to guard the unknowing citizens of England against threats of myth, legend and ancient history.

The last issue showed Duncan and his gran being threatened by the legendary warrior Beowulf as he was clinging to the roof of Duncan’s car. The pair had a sheer moment of panic before our fateful cut to black.

Opening scene here in issue #9, we have the dynamic duet in the moments after Beowulf single handily rips the roof off Duncan’s car while it is in motion.  The quick thinking of both gran and grandson put the mythic warrior onto the attack, and its not long before the battle is over and done with a few panels later – all down to Gran’s arsenal of weaponry.

We then change focus and move over to Merlin and his new lackey, mother of Duncan and daughter of Gran (Bridgette if you were curious of her name). Merlin reveals that Arthur has no memory of him at all, abd this worries that wizard or lore as he is disturbed by these events. His primary focus has been to distract Duncan so he can focus at rebuilding the connection to Arthur, who waits patiently in the other world.

The dark and foreboding design of Beowulf in these panels show his insanely powerful flaming juggernaut being, like you would describe a being straight out of lore. While the series has some wonderfully dark and harrowing imagery, this issue in particular has some outstanding character design for Beowulf and Merlin. The colour scheme is wonderful as well where the sky is a stunning blend of Teal and Pink to set up a totally bizarre fight between historian and warrior of legend. The otherworldly colour scheme that clings to Merlin and Arthur is one of vibrant and sharp colours that really do help reinforce the magical influences of these characters.

The entire saga so far has been tremendously dark, disturbing and delicious, and the the story continues to flow like a river, moving into new stories effortlessly as the Arthurian legend is one of enormous scope and depth.

This series continues to be a joy to read, where I will await patiently for the turn of Grendel next time…