There’s a new comic on the scene!  Spacewarp is a brand science-fiction, creator-owned release from the stable of Pat Mills. I know!?  I was just as excited when I heard the news of its impending launch and now here it is – though the big question is, is it any good? 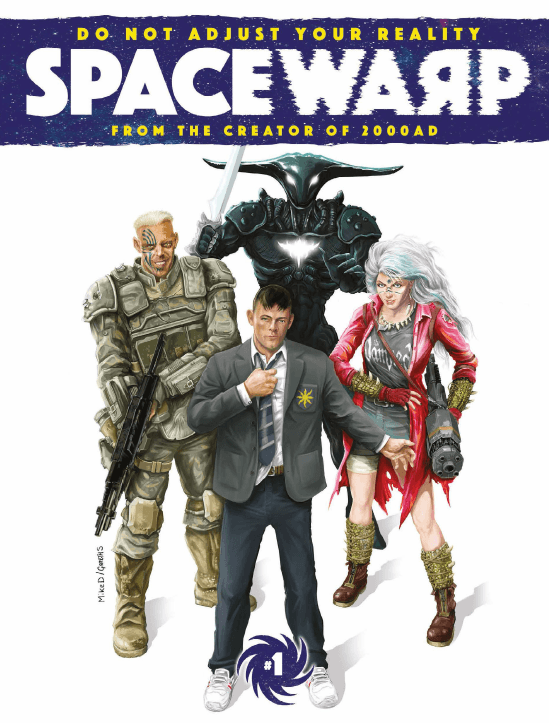 Well answering that question immediately would make this review both a wee bit slim and quite frankly leave you with a few more questions.  Like for example:  What is this about? Where can I get it? Who writes the stories and who’s the artist(s)?  So if you’ve missed the social media drops and other such bumpf online I’ll fill in a few blanks the best I can.

As mentioned above Spacewarp is a brand new release published by Millsverse (Pat Mills), you can find it – initially – online come the 29th July 2020, it weighs in it at 70 pages, and there are future plans for it to be released as a printed comic too.   Numerous artists deliver, in their own unique art style, black & white, pen & ink (possibly-like) work, which is absolutely gorgeous.  It’s fantastic to see such talent on these pages, from Garth Sleightholme’s organic opening with the “Schlock/Slayer” prologue, over to Ian Ashcroft’s “Hellbreaker” (which to me showed a true love of Martin Emond within these panels) and Mike Donaldson’s “FuTant” which begins one way, then suddenly turns and appears to have been taken for the pages of Battle or Warlord, though slightly more gruesome.  There is so much excellent work with these pages it feels somewhat wrong to have left a few artists out.

As for the person behind the pen on these tales, it is Pat Mills himself.  Though interestingly albeit each tale is set in either a different time, place, universe, or afterlife — every story in these pages is interlinked.  Purposely too, this isn’t just a minor panel hinting at a possible link, but everything is clearly linked.  The clue to why is partly in the title and once you start reading you’ll not only discover why Dinosaurs invaded Liverpool in the 1970s or why Earth was decimated by an Alien Invasion or why Earth was wiped out by Makrobes, or why has justice risen from Hell itself to punish the wicked.  All of these tales within Spacewarp are intertwined and Pat’s Cosmic Spinny Jenny must have been on fire, as he pathed out the lives of our heroes not only across many time-zones but parallel universes too.

My only real moan about this release of Spacewarp and this is so minor I feel stuck in the past for saying it, is that I like physical objects.  I understand we are in the 21st Century and Millsverse have made it clear we should expect a physical copy around Autumn, but I would have loved to pick this up on Day One in print.  As I say though, this is the 21st Century and all the Jets & Sharks are iPading or Kindling it, so I guess it is smart to ship it electronically first.  I’ll just go back to moaning about the size of Wagon Wheels or something.  Wait!?  Am I Joe Megiddo from Jurrasic Punx!?

Spacewarp is an absolute blast to read.  Not only is it totally refreshing, it feels totally new, untamed, and alive; also here’s a comic being driven by its creators too!  They want it to succeed, they’re clearly giving it their all and it’s clear on every page turn.  It looks fantastic and reads just as brilliantly.  I hope that issue #2 lands soon as I need to know where Pat is shoving our heroes towards.

SPACEWARP is available to pre-order – via Kindle or Comixology – for release on the 29th July 2020.  For more information visit their website here.