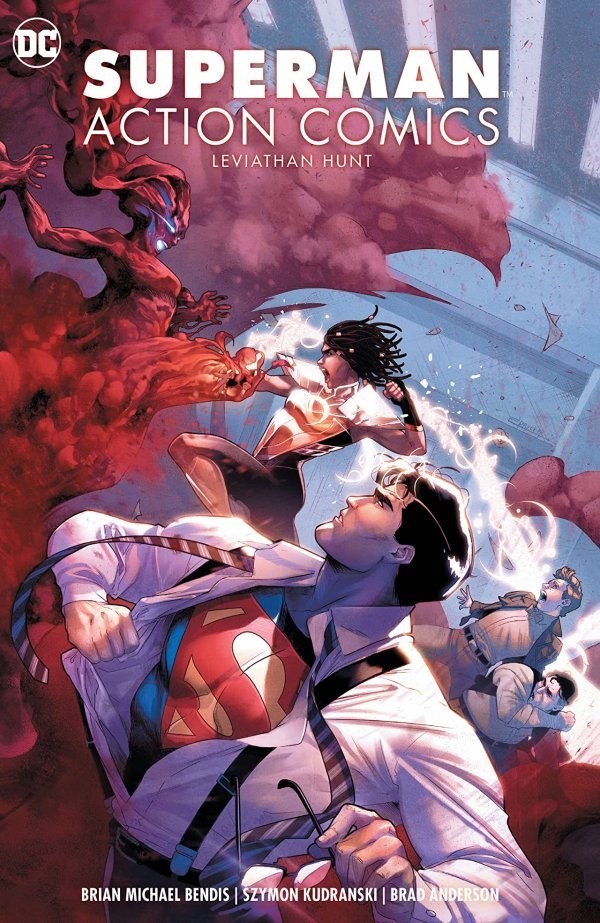 While Superman lets everyone in on his big secret in Brian Michael Bendis’ concurrent Superman title, Action Comics continues to see Superman dealing with the threat of the Invisible Mafia and Leviathan in Metropolis. However, Superman – Action Comics Vol. 3: Leviathan Hunt doesn’t feature much of a hunt for the titular organization, but instead his and Lois Lane’s investigation into the Invisible Mafia as a vigilante starts striking them. While the story is overall entertaining, it meanders as Bendis tries to juggle a lot of plot points, particularly when he suddenly introduces his latest created superhero character Naomi into the mix.

Bendis’ story still intrigues as we see Metropolis from a bit more of a ground-level approach compared to Superman or other titles where the Man of Steel is dealing with more galactic or world-ending threats. The Daily Planet gets some nice focus, especially as one of their newest reporters is secretly a superpowered enforcer for the Invisible Mafia and decides on her own to take things up a notch while a new vigilante named Thorn also takes things into her own hands. Bendis’ character work is also well done in most of the book, providing Superman with good moments to shine along with nice development for his newer characters.

Where Leviathan Hunt falters, though, is in the second half of the book as Bendis juggles too many things at once. Despite being in the title, Leviathan doesn’t have much of a role at all here, likely due to Bendis using them in the concurrent-running Event Leviathan series. That wouldn’t be as much of an issue if the story’s antagonist didn’t shift so much. Is it Leviathan? Thorn? The Invisible Mafia? Red Cloud? Or even Lex Luthor, who makes sporadic appearances as he works behind the scenes? Red Cloud takes the central antagonist role but only in the latter half of the book and even though she has enough power to take on Superman, she’s still not presented as the big bad. Bendis is clearly building to something in the future of his Action Comics run, but the problem is in this particularly chapter the scope of it gets lost because the focus is never on one sole thing for very long.

That issue becomes even more apparent when Bendis suddenly does a mini-crossover with Naomi, his new teenaged superhero with mysterious origins as she goes to Superman for help. She comes literally out of nowhere and stays for the rest of the book as Superman and even Batman and other members of the Justice League study her powers and where she came from. It’s rather meant to act as a bit of a backdoor pilot for Bendis’ Naomi series. Granted, she’s an interesting character and has some nice interactions with both Superman and Batman, but her abrupt appearance doesn’t serve much to the story except to show off how powerful she already is. Reading Naomi should still be a fair bit of fun given how Bendis writes her, it’s only her role in the story that felt sudden and out of place.

While the story doesn’t carry all of the book’s weight, Szymon Kudranski’s artwork does throughout the book. He creates some very neat panel layouts that makes the reading experience more interesting while his character designs are well done. His facial work is quite detailed and the character movements flow well from panel to panel as he relies a lot on body language to convey emotion. The only times the art seems hindered is when Bendis uses too much dialogue or exposition, such as in the very last issue of the book where the story flashes back and forth between the present and the past as various people tell the story of Superman’s fight. Certain pages and panels in the climax distract from both the artwork and story, but Kudranski still does a good job with his art and tries to arrange all the exposition as neatly as possible. Brad Anderson’s colours are quite vibrant, particularly when Thorn and Red Cloud unleash their anger as he mixes a lot of darks and reds together.

Bendis continues some interesting story threads in Leviathan Hunt, but also juggles way too much as his focus is on several different elements at once. From the hunt for Leviathan, the Invisible Mafia’s influence in the city to Naomi’s introduction, there is just a lot going on that doesn’t mesh together in a very coherent way. Kudranski and Anderson’s artwork elevate the book’s standing, but not quite enough to save it either. While it has some intriguing ideas and makes some advancements in the story Bendis is cooking up for the future of Action Comics, it doesn’t stick the landing very well.