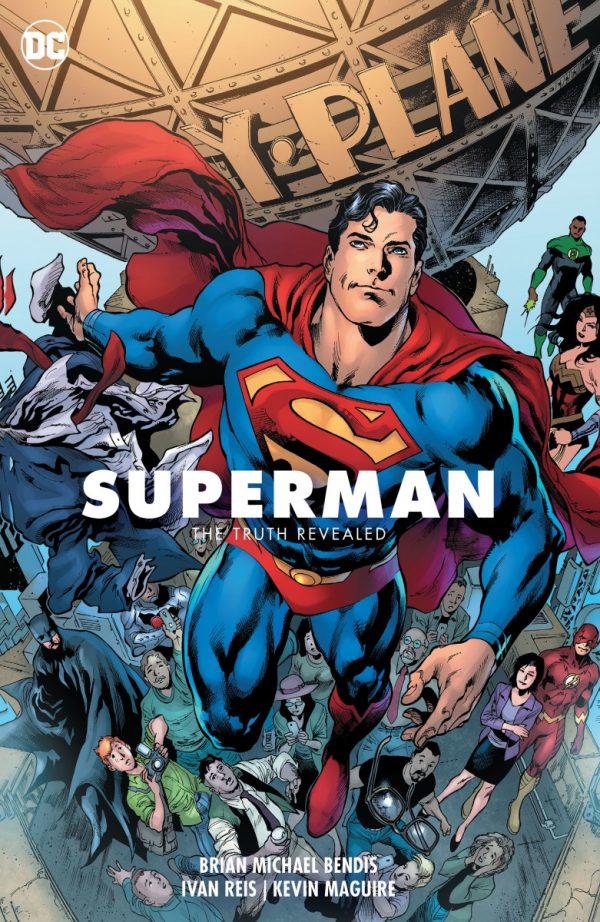 Every new writer coming aboard a big superhero series always strives to make their own mark on that hero whether its through an interesting new story or, more often that not, a huge shake up in the hero’s status quo. Brian Michael Bendis isn’t done shaking things up in Superman as the latest change to the Man of Steel’s life is his decision to go public with his secret identity, revealing he is actually Clark Kent. Superman Vol. 3: The Truth Revealed offers an interesting enough premise, but the execution doesn’t come through in a way that feels authentic while also somewhat misunderstanding what Clark Kent and Superman mean to each other.

Bendis spends about the first half of the book building up to Superman’s reveal, using conversations with several characters to justify his decision. The problem though is Bendis cuts off those conversations just as they reach the moment he tells them what his decision is. It is particularly egregious that we never see the full conversation between Superman and Lois and only learn what her thoughts on the decision are after the fact. The same can be said for Superman’s conversation with Supergirl. The only conversation we see in full prior to his reveal is with, of all people, Adam Strange, whose unfamiliarity with Superman’s secret identity is likely meant as a window to how the rest of the superhero community (much less the regular public) would react, but it doesn’t ring quite as true because of their lack of history. It would have been much stronger had we gotten to see the full conversations between Lois and/or Supergirl or if Superman even went to Batman.

Instead, we only have Superman’s discussion with Strange to go on where he reveals this thinking comes from the latest developments regarding his thought-to-dead father, Jor-El, and the secrets he kept from the previous Superman volumes and his public address to the world. And here lies where the misunderstanding stems from as Superman tells how he was “trained, almost like an athlete” by his parents and how the identity of Clark Kent was formed as a child to keep his secret. It seemingly strips the importance of the Clark Kent side to Superman where it is nothing but a false persona where, in fact, Clark Kent is truly Superman. The fact that he states Jonathan and Martha Kent “trained” him doesn’t sit right either as, while the pair did work to protect Clark’s identity, they allowed him every freedom to choose who we wanted to be and how he would go about his daily life as a man. Not to say that there is not rationalization in Superman’s decision, but it is not delved into very much before his reveal.

Of course, Superman revealing his identity would be a bigger change if it wasn’t the first time this happened, especially recently. It was only 5 – 6 years ago in The New 52 that Superman’s identity was revealed to the world, making this the second time this has happened in such a short period. The only difference that makes this current reveal marginally more interesting is how Superman decides himself to share his identity with the world rather than it be forced on him. As with the change in The New 52, it is likely Bendis’ reveal won’t stick for very long.

One strength to the story though is some of the character interactions Bendis wrote. There’s a touching moment between Superman and Perry White that is wordless, letting Ivan Reis’ artwork speak for itself, as well nice scenes between Superman and his best pal, Jimmy Olsen. These scenes serve as good reminders that Superman has formed important relationships with people other than Lois, a fact that bolsters Bendis’ belief of how Superman and Clark Kent’s lives have blended together. The levity between them all is nice too, particularly after Superman reveals his secret and Perry begins to realize just how much was and was not an act in his disguise. Bendis does have a bit of trouble through writing Damian Wayne in a chapter that focuses on the Super Sons. He doesn’t quite capture Damian’s voice, playing him off a little too slapstick at times, though there are again some good interactions between him and Jon during that chapter. Portions of the final two chapters are also guest written by Greg Rucka, Matt Friction and Jody Houser as they each examine Superman’s revelation from the eyes of other DC heroes and villains in some really interesting and fun reactions.

Ivan Reis is the main artist on the the big chapters of the book. He captures the emotions behind the characters very well, such as the aforementioned scene with Superman and Perry, and the little bit of action in his chapters is well detailed. Reis also does a great job showcasing some pretty large crowds or cast of characters in a single image, again showing a huge amount of detail. Other artists in the book include Kevin Maguire, David Lafuente, Mike Perkins, Alex Sinclair, Paul Mounts and several others. Each artist does well with their section of the book as they travel across the DC universe to see the ramifications of Superman’s actions. There’s a lot of varied artwork and vibrant colours, but the whole team did a good job with the visuals, from the character’s facial work to the settings and atmosphere of more serious conversations.

Superman Vol. 3: The Truth Revealed may not be for every Superman’s taste based on Bendis’ thought regarding the separation of Clark Kent and Superman. He does well with a few of the character interactions, but Superman’s motivations aren’t quite as fleshed out as they could be. The artwork is pretty good for the most part, particularly from Reis as he does some great work on the characters and how they hold themselves. It will be interesting to see where Bendis goes from here, though don’t expect this change to stick around too long.