Anghus Houvouras continues his deep dive into the Skywalker Saga… In part one we discussed the missed opportunity of connecting Anakin’s emotional arc to the pain of slavery and losing his mother. Anakin’s disturbing past is abandoned. The anger and rage that we see him capable of in subsequent films never feels sufficiently connected to his fear of loss. He’s driven to murderous rage when his Mother is killed, but until his vision of impending danger, Shmi Skywalker is an afterthought. He’s angry when the story requires him to be. Rather than root that anger in his experiences, he’s simply a bi-polar time bomb with a faulty detonator.

If Lucas had made Anakin’s journey in the prequels about his deep-seated hatred of slavery and the injustice he and his mother endured, he could have created a compelling character arc that made Anakin more sympathetic. The truth is, the character is betrayed by his creator; Lucas provides him with a number of potentially interesting emotional arcs only to abandon them when he moves on to the next chapter. 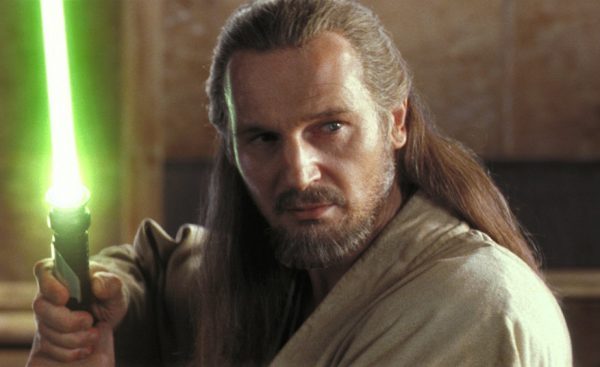 Qui-Gon Jinn – Pharisee of the Force

Anakin and Qui-Gon’s relationship is interesting because you would reckon that there is some reverence for the man who freed him. But Anakin watches as Qui-Gon’s blind devotion to “the will of the Force” ultimately leads to his premature death. He valued that spiritual commitment more than the basic principles of human dignity. With the stroke of a lightsaber, Qui-Gon could have freed Shmi. Yet, he let her servitude continue because he believed it was not “the will of the Force”, or he did not consider her suffering to be more or less important than the mystical power he had devoted his life to.

Qui-Gon Jinn is a religious zealot whose unyielding belief in the “Force” leads to his own death and the ruination of the Galactic Republic. Every choice he made was influenced by his beliefs, and every choice he made turned out to be wrong.

Qui-Gon Jinn realizes that Anakin is sensitive to the “Force”, has a ridiculously high midi-chlorian count and his mother claims he was conceived immaculately. Presented with the idea that he may have been staring at the prophesied chosen one, Qui-Gon conceives a plan to free Anakin and bring him to the Jedi Council to show off his amazing find. He makes the laziest of efforts to also free Anakin’s mother, Shmi, but does not press too hard once he sets up the bet that ultimately gets them off Tatooine with his precious prophecy boy. There are lessons that Anakin should have learned from the tragedy of Qui-Gon Jinn. Lessons such as what Qui-Gon’s blind devotion to his faith led him to, as well as, acknowledging that the man who freed him only did so because of his misguided belief of a divine prophecy, a belief that the metaphysical machinations of the force were more important than the suffering of the innocent.

Anakin shows barely any reluctance to leave. This might be a product of bad direction and a child actor unable to emote properly. Leaving his mother behind should have been a significant moment, but apparently, the thought of becoming a Jedi and hanging out with Padmé seemed like a better life plan than spending his best years on planet sand-in-your-ass-crack working for a junk dealer. I cannot blame the kid, but Anakin’s relationship with his mother as presented in The Phantom Menace feels, at best, obligatory.

It is odd how little Anakin’s relationship with his mother is explored in the gap between the time they leave Tatooine and when he returns in Attack of the Clones after having a vision that she is in danger. He completely abandons his mother. This weird oversight feels like the biggest missed opportunity in the prequels and eventually, the terrible new trilogy.

The second most glaring oversight framing Qui-Gon’s journey as the tragedy it so clearly is; A man blinded by faith who sets in motion a chain of events that will eventually result in the death of billions of sentient beings. Qui-Gon should hang like a spectre over Anakin and Obi Wan in subsequent installments. He should be a cautionary tale to Anakin to what happens to those who defer their will to their faith. But once he dies, he’s an afterthought. Relegated to his one installment. His poor choices never examined in depth. His failings which clearly ripple throughout the rest of the trilogy are never examined.

Qui-Gon’s shadow could have loomed large over the next two movies. His tragedy could have been so much more powerful had he any narrative presence after Phantom Menace, other than a handful of throwaway lines about his abilities to communicate via the force.

The Relegation of Padmé Amidala The Bechdel Test is (also known as the Bechdel–Wallace test) is a measure of the representation of women in fiction. It asks whether a work features at least two women who talk to each other about something other than a man. This simple metric helps determine whether female characters have actual agency in the story or merely exist to serve the male characters forwarding the narrative.

The Phantom Menace passes the Bechdel Test. Revenge of the Sith does not. While this is merely a measure of inclusivity, it helps show just how the prequel’s most powerful female character goes from a hero to an emotional prop in the span of three films.

At the end of Revenge of the Sith, when Anakin tells Padmé that he could rule the galaxy and make things right, the motivation is random and unclear. Yes, he wants to save Padmé because he foresees her death, but imagine a main character who is actually trying to bring freedom to slaves and tear down what he perceives to be a corrupt system. It would have strengthened the motivation for turning on his allies and made him more sympathetic. It is interesting how much faith Padmé has in the system that let her planet get taken over. The only way she was able to save her people was to go off on her own and help save the day. Instead of having Padmé being this die-hard proponent of the current system, why not make her sympathetic to Anakin and his cause? The Jedi did her precious few favors during the battle of Naboo. In fact, you could argue that other than distracting Darth Maul and preventing him from turning the Padmé-led resistance into pulp, they were not actively participating in the revolt. Other than Qui-Gon bringing Anakin along for some intergalactic child endangerment, their efforts were negligible to the outcome.

That brings up something that plagues the prequels; characters not being dramatically impacted by the actions of the story. Padmé is abandoned by the Republic and has to save the planet on her own. How likely are you to trust a system that ultimately fails you when you need it the most? In its current form, Padmé has a few moments to talk about ‘the death of democracy’, but it never really goes anywhere. She is so passive throughout the movies in terms of the central struggle and mostly relegated to ‘love interest’. It is strange watching this character transition from saying ‘fuck the system’ and risking her life to save her people, to an ass on a couch lamenting the decisions being made without any involvement. The character loses all urgency after marrying Anakin. Even within the existing story elements, there were opportunities to make her character pivotal in the action and outcome instead of an excuse to make Anakin turn into the bad guy. Her death is the ultimate insult to the character. No longer the strong leader taking up arms and risking her life to save her people or fight for what she believes in. She’s a love-struck idiot who chooses to no longer live because the man she loved turned evil and makes a choice to leave two children motherless because she refuses to live in a galaxy where her husband embraces totalitarianism.

I think about this every time someone tries to defend Revenge of the Sith as the ‘best’ of the prequel films.

Padme Amidala is such a fine example of wasted potential in the prequels; Her transformation from no-nonsense badass, leader to a subserveant lady-in-waiting is one of the prequels’ most gaping flaws and a total missed opportunity.

Giving Anakin an Actual Reason to Rage Against the Machine Slavery could have given Anakin a real reason to despise the system, work against the interests of his allies and pose a philosophical posit to Obi-Wan and others that the system does not work. Losing his mother could have been even more devastating if Lucas had piled on the tragedy. He was not able to save her in time, not because of a stupid vision that came out of nowhere but because he was not strong enough to defy the Jedi. He was also not able to enact his plan in time, thereby, putting the responsibility for her death not just on the “Sand People” but on everyone who tried to dissuade him to listen to the Midi-chlorians and not his own heart: Yoda, Mace Windu and even Obi-Wan; all of them preached “the will of the Force”. In Anakin’s eyes, the Jedi could have been evil; the evil of inaction, which is comfortable with the suffering of others because it was not part of their job description; an army of lightsaber-wielding, powerful knights who only chose to protect the precious few that were protected by the umbrella of the Republic.

This aligns with what Knights were in ancient times; armed protectors of the establishment who went to war for whatever reason the people in power decided was worthy of bloodshed. Outside the fictional world of King Arthur, Knights were not heroic figures seeking justice for all. They were merely to protect their King or Queen and enforce the law. Of course, ‘the law’ was completely fluid and could be changed at the drop of a crown. 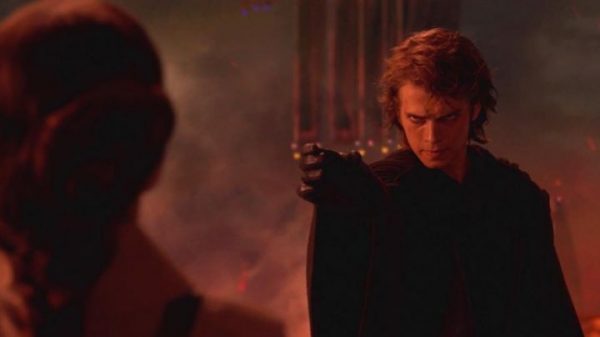 Even though audiences may have rejected Anakin’s attempt at destroying the Republic in favor of an all-controlling Empire, at least, we would have a more divisive reason as to why he sided with Palpatine. Again, you can somewhat see those dangling threads in what is already there; Anakin loves Padmé and does not want to lose her. His force vision of his mother in danger makes his vision in Revenge of the Sith feel more imminent, but those dangling threads are never tied together satisfyingly.

Hence, under this new central conflict, Anakin has an ideological dispute with the Jedi surrounding their failure to use their special powers for the benefit of all. He joins Palpatine in the hopes of establishing a new rule of law that will allow them to bring their version of justice to the galaxy. This conflict causes him to betray the Jedi and join Palpatine in birthing the Empire. Padme still gets the betrayal of Anakin’s turn to darkness. Anakin kills Padme literally instead of emotionally and you ditch the awful irony of Anakin’s self-fulfilling prophecy for an internal conflict where our main character struggles to escape the rage created from the tragedy of his childhood which eventually drags him into the darkness.