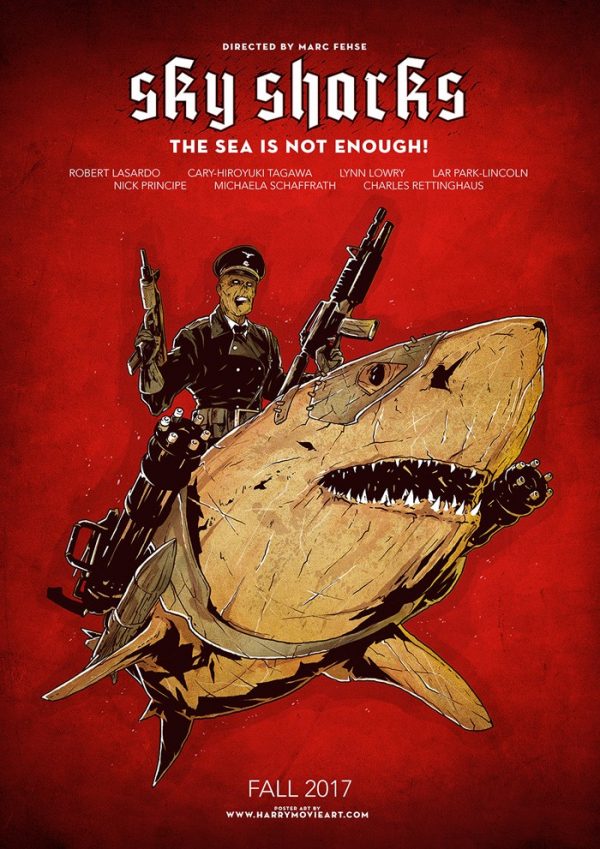 A team of geologists discovers a Nazi warship in the Arctic that was believed lost: the Himmelsfaust, a gigantic steel colossus from the Third Reich, filled to the brim with unimaginable machines of destruction. Dr. Klaus Richter, the spiritual forefather of this experiment, is forced to stop his deadly army of the undead in order to save humanity and planet Earth from seemingly certain doom. 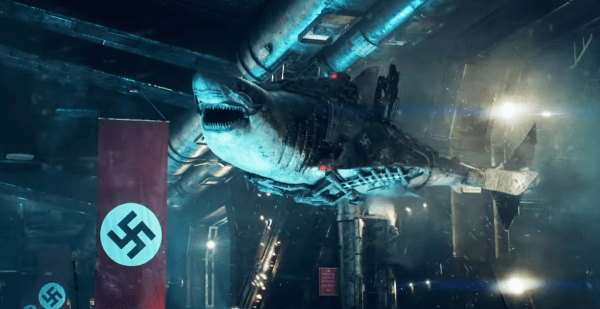 Frightfest 2020’s opening film is surely one of the most shamelessly barmy of the fest’s entire 25-film lineup, and one which proudly announces itself as self-conscious schlock from its title onward – Sky Sharks.

In a post-Sharknado world, however, there is considerable debate among horror fans about the value of “so-bad-it’s-good” movies made with tongue-in-cheek intent, because these projects by design cannot match the earnest conception of something like, say, Tommy Wiseau’s accidental “disasterpiece” The Room.

It is incredibly easy for these types of knowingly roughshod affairs to feel like cynical calculations above all else, yet writer-director Marc Fehse offers up just enough genuine effort below the surface to suggest his movie isn’t quite so glib.

A team of geologists end up discovering a Nazi warship buried deep in the ice, in turn awakening the vessel that’s stocked with grotesque abominations created during the height of the Third Reich, especially an army of genetically mutated flying zombie sharks as well as a fleet of Nazi super-soldiers capable of piloting them. 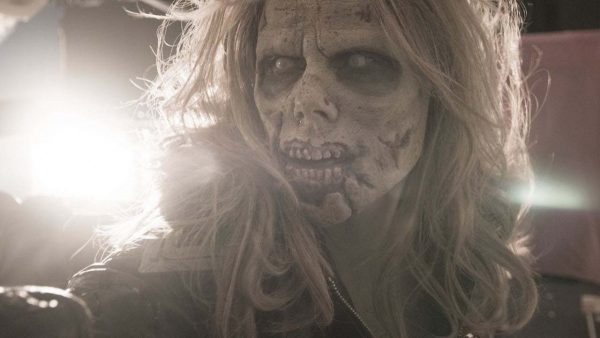 As the revenant army plots to unleash its full might on the world, regretful former Nazi scientist Dr. Klaus Richter (Ann Marie Pallan) teams with his daughters Angelique (Barbara Nedeljakova) and Diabla (Eva Habermann) to put an end to his deadly creation.

This is, unsurprisingly, not a movie anyone should watch for its plot, for though there is a better-than-expected attempt to tell a story and invest audiences in its lore, it is truly coherent on only the most odd occasion.

Sky Sharks is best enjoyed as the throw-everything-at-the-wall schlock-fest that it absolutely is, jam-packed with goopy CGI-assisted action, extreme gore, gratuitous nudity, and a tone which veers between satirical – there are a couple of Starship Troopers-esque mid-film commercials – and outrageously deadpan (with dry zingers such as “they’re genetically mutating to defend themselves.”)

If it may feel too pandering for some viewers, ultimately one question arises – did Sky Sharks entertain me? And for the most part the answer is yes.

What makes the film stand out from other similar romps is the unexpectedly impressive visual detail. Now, the pure fidelity of the CGI ranges from shockingly decent to nauseatingly awful throughout, but even in its uglier moments it’s clear that Fehse and his team have a sure eye for art direction and production design. If it’s easy to read that title and dismiss this as a sub-SyFy effort, there’s a creativity to all the digital set extensions which fashions it as ambitious even in its less-convincing moments.

There’s some eye-popping cinematography on offer here from Olaf Markmann and Marco J. Riedl; a late-film shot of zombie sharks falling out of the sky mid-sunset is more breathtaking than anyone could reasonably expect from a movie like this. The action sequences are also capably filmed; it’s always possible to tell what’s going on, and unlike similar productions the CGI never quite devolves into an incomprehensible Vaseline smear.

Gore effects are meanwhile a solid mixture of digital and practical; there are a few fantastic practical facial obliteration gags later in the movie, while even the most obvious CGI blood is at least inventive enough to engage. And without giving too much away, an homage to Ghost Ship‘s iconic opening decapitation sequence might well be the movie’s gonzo highlight.

Though about 90% of Sky Sharks looks like it was shot against a green screen and there are a ton of glaring technical inconsistencies – obvious ADR dubbing, off-key sound mixing, and scenes scarcely held together by stock footage inserts – it usually veers more on the side of charming than hollow, aided by a pulsing yet slightly incongruous synth musical score. 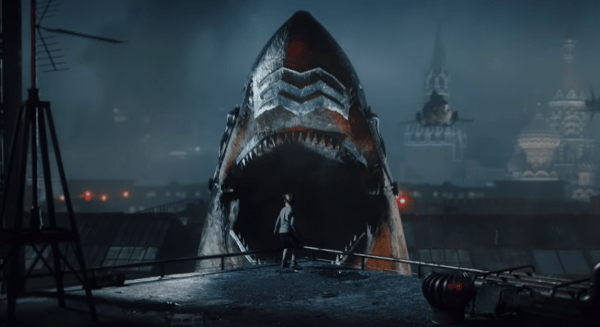 The cast is a mixed bag of mildly familiar faces clearly having fun and actors resembling wooden carvings, albeit perhaps intentionally in the latter case. Mortal Kombat‘s Cary-Hiroyuki Tagawa makes an amusingly against-type appearance as a sexist, drunken hick plane passenger in the film’s pre-title sequence, though naturally doesn’t stick around for long, while the legendary Tony Todd appears briefly later as an American general trying to take control of the situation.

So many of the line readings throughout the film end up feeling like the first take, and it’s tough to discern whether this was the fault of the actors, the director, or an intentional flourish intended to heighten the off-kilter tone. Either way, the only performance that actually musters anything close to real, honest-to-God gravitas is that of Thomas Morris, who despite spending most of the movie caked under layers of old man makeup, makes Dr. Richter an amusingly hammy anti-hero.

At 102 minutes in length – including a post-credits trailer for a “coming attraction” called Sky Frogs – one couldn’t be blamed for feeling that Sky Sharks might’ve been better-suited to the short film treatment, yet there’s just enough creativity to keep it chugging along through countless exposition dumps and digital sky battles.

It is scattershot and barely makes sense, but there’s also an over-the-odds gusto on offer for such a budgetarily constrained project. There’s no danger that anyone will confuse Sky Sharks with a movie taking itself too seriously, and occasionally it graduates to being genuinely hilarious, whether entirely intended or not. It doesn’t always work, but schlock aficionados should find enough to enjoy throughout. As an opener for Frightfest ’20, it’s suitably escapist kitsch.