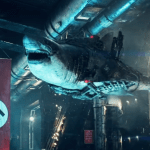 More than five years after it first started making waves online, director Mark Fehse’s crowd-funded horror Sky Sharks is set to receive its UK premiere at FrightFest Digital Edition this August, and you can check out a crazy new trailer for the film, which revolves around an army of genetically-mutated Nazi zombie super-soldiers and their […]

It’s been a while since we’ve heard anything about Sky Sharks, the crowd-funded horror from director Mark Fehse which revolves around a group of Nazi zombies and their genetically modified flying sharks. Last year brought a teaser, a batch of character posters and https://www.flickeringmyth.com//2015/05/nazi-zombies-on-flying-sharks-attack-in-first-clip-from-sky-sharks/, and now we have a brand new trailer for the film, […]

Following on from last week’s first trailer, a lengthy clip from the upcoming crowdfunded horror Sky Sharks has arrived online, which sees a horde of Nazi zombies (on mutated flying sharks) launching an attack on an unsuspecting passenger plane; check it out here… Deep in the ice of the Antarctic, a team of geologists uncover […]

A first trailer has arrived online for the crowdfunded horror feature Sky Sharks, which revolves around a squad of Nazi zombies and their genetically mutated flying sharks. Yes, it sounds crazy, and the trailer is too. Check it out below after the official synopsis… Deep in the ice of the Antarctic, a team of geologists […]

Okay, so this may be the most ridiculous concept of all time… Thanks to Dread Central, we’ve got a batch of posters for director Mark Fehse’s upcoming horror Sky Sharks, which features flying super-mutant Nazi zombie sharks. Yes, you read that right…   A team of Arctic geologists stumble across an abandoned laboratory in which […]