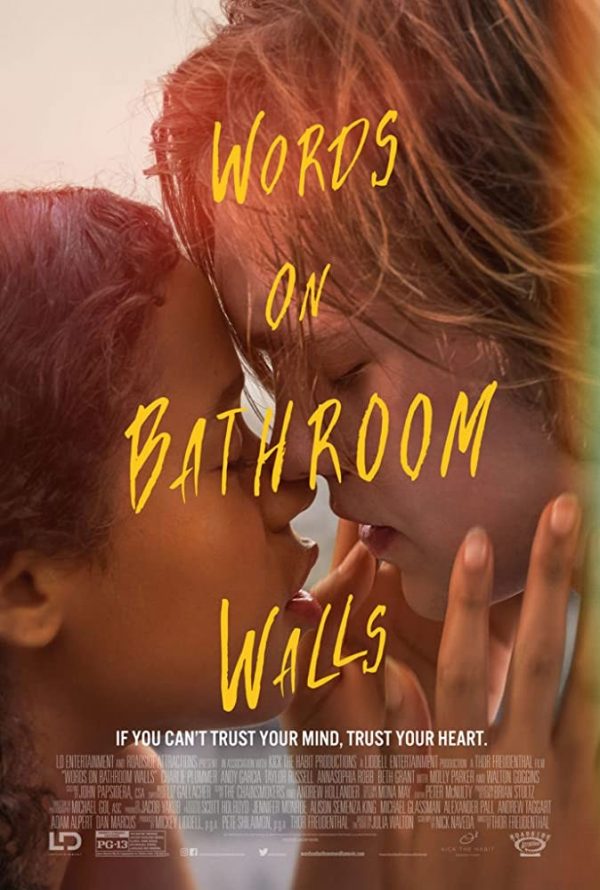 A teenager coping with paranoid schizophrenia hopes his new experimental drug treatment will help him navigate high school and the outside world.

One of the major plot points in Words on Bathroom Walls involves high school senior Adam (Charlie Plummer, knocking this role out of the park and continuing to be both somewhat of a young Leonardo DiCaprio and one of the most exciting young actors on the rise) deathly afraid of confessing to his budding love interest Maya (Taylor Russell, another undeniably impressive talent on the rise) that he suffers from paranoid schizophrenia. It’s not so much that he is ashamed of himself (although there is definitely self-loathing from the condition itself and not the caring people around him that Adam’s mind plays tricks on deluding him to believe an overwhelming amount of negative thoughts), but that he is terrified that knowledge coming to light of something thing he has no control over will drastically shift someone’s entire perspective on him as a person.

This line of thinking is obviously going to strike a chord with other schizophrenic individuals, but the beauty of Words on Bathroom Walls is that the message will assuredly reach a wider range. As someone born with a physical disease, I couldn’t help but find some of myself within Adam as a person, having that constant fear that once people find out I have a disability, for better or worse, their opinions and the way they treat me will change. It’s one of the main reasons I have always preferred texting to having an actual conversation in person (another reason being I’m naturally socially awkward, something else that can actually be ascribed to the character of Adam now that I think about it), at least until I feel like I have made a connection with the other person. No one can see a wheelchair through digital communication; they are always seeing words and getting a general idea of personality and formulating thoughts without having an unavoidable visual reminder of the proverbial elephant in the room. Finding oneself in characters aside, Words on Bathroom Walls (directed by Thor Freudenthal, known more for family-friendly films such as Diary of a Wimpy Kid, here getting to approach similar high school material while dealing with more complicated matters and appreciated touches of caliginosity that organically occurs from coping with such a difficult condition to manage) succeeds on the strength of not only understanding schizophrenia but that the ideology that the road to healing and betterment is not through a nonexistent cure. Written by Nick Naveda and based on the book by Julia Walton, it’s about coming to terms with the reality of the situation, working on it with loved ones instead of shutting them out under the impression that they see you as a burden, and finding a means of being productive alongside the condition. It will only ever stop someone from achieving their dreams if they don’t find the degree of peace from the cards they’ve been dealt in life.

For Adam, his goal is to become a chef, and it’s made clear to viewers early on that he knows how to prepare a fancy dish for two. It’s only when the paranoid schizophrenia starts to become more prominent during his senior year that an incident occurs in a science class, leading to his transfer to an out-of-the-way Catholic school. Starting all over again making friends, he takes a liking to Maya who is not only wise beyond her years as the school’s valedictorian but also radiates confidence. She’s also running a side hustle fixated on academic fraud for students falling behind in their studies. Adam uses this as an opportunity to have his family hire her as a tutor, as the hallucinations and voices in his head have become so dominant that a once-promising and stellar student is now having trouble keeping up to speed. At heart, this is still a teenage romance narrative so the developments there are fairly straightforward and not exactly surprising. The spin comes from the film’s presentation of paranoid schizophrenia, which is hit and miss but mostly effective. The voice of darkness inside Adam’s head is hauntingly realized as something fittingly out of a horror movie. However, there are also exaggerated over-the-top characters he envisions that are not only goofy but take away from the seriousness of the story at hand. It doesn’t necessarily romanticize schizophrenia, as the characters do serve believable purposes (for example, there’s a horny shirtless dude that is meant to represent his unfiltered sexual thoughts), it mostly just feels out of place. Watching this darkness take hold of Adam’s mind simply feels far more authentic to portraying the condition over glimpses of a hippie girl that tries to instill some confidence in him. Nevertheless, as Adam begins taking a new medication that actually begins to help (albeit spring upon him an entirely new set of problems), there is a nice visual touch of them glitching in and out of existence. From the cinematography itself to the stylistic approach when it comes to schizophrenia, Words on Bathroom Walls are always nice to look at. The soundtrack is also done by The Chainsmokers, which is fine low-fi tunes that fit the mood.

There is also an exploration of how little privacy Adam has as a result of the condition. His therapist has to share transcriptions of the sessions with his mother (Molly Parker) which inevitably begins to cause a rift in their relationship. And that’s without mentioning Adam’s stepfather played by Walton Goggins, who he is convinced wants nothing to do with him as a result of the schizophrenia and wishes to lock him away in a mental facility so he doesn’t have to deal with it. Whether it’s the darkness playing more tricks or the truth is something I will leave you to unearth for yourself, as the casting choice of Goggins, someone who tends to play evil characters, is a smart choice that toys with audience expectations based on what we know of him as a performer. Nonetheless, Adam takes advantage of now being in a Catholic school to take up confession with a Father played by Andy Garcia, a dynamic that obviously gives him back a sense of freedom without becoming religiously preachy. To boot, they make for some of the most entertaining and emotional scenes in the movie. 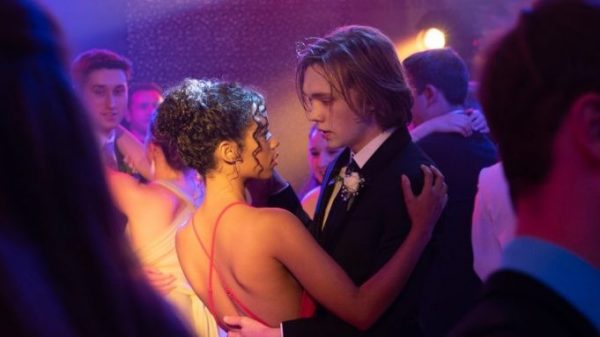 With that said, Words on Bathroom Walls probably wraps itself up too cleanly and happily for its own good. That’s not to say I’m against a happy ending, but the film comes dangerously close to undoing all of the important lessons and experiences on display. There are also some aspects of Maya’s character and family that feel like an afterthought. Plot conveniences are definitely in abundance here, but they are also easy to roll with considering the film is more willing than not to treat paranoid schizophrenia thoughtfully and delicately, all with another exceptional performance from Charlie Plummer.