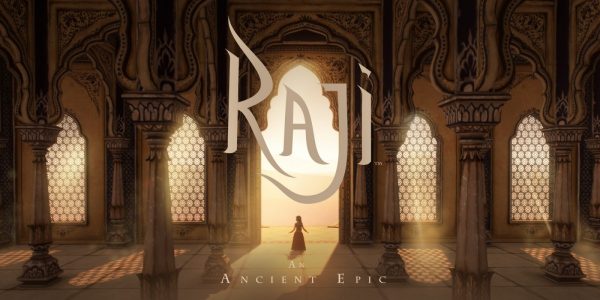 Raji: An Ancient Epic is an action platformer title from Nodding Head, and this beautiful first title from the studio tells a wonderfully dark story while blending culture, beautiful visuals and intense gameplay. For this review I played the game on the Nintendo Switch though it is also currently out on Steam. The game was played both in handheld and docked modes and both will be addressed in the review.

The game is centred around the return of the demons after their banishment by the gods, and how they look to gain some form of revenge. You play as Raji, a street performing acrobat who is on a mission to recover her brother Golu, who was kidnapped by the demons. Throughout the game the story is narrated by two Hindu deities, Maa Durga and Lord Vishnu. The two narrate the story over the action of the player during exploration and navigation sections of the game and take the role primarily as the storytellers of the entire narrative whilst also watching over Raji and occasionally send help and favour to aid her on the quest. 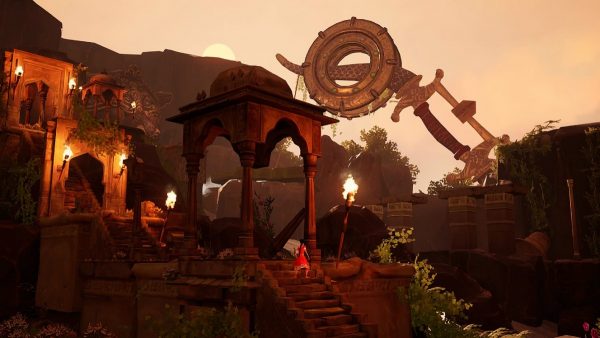 Raji certainly tells a tale of a culture that does not appear to have a strong presence in the gaming community, and the dive into the Indian culture and religious mythos is an interesting one. The game tells a few of its story elements in a beautiful shadow puppet style, which may possibly be linked to Raji and Golu’s life as street performers. The style automatically reminded me of a game on the original Xbox called Sudeki which did the exact same thing.

The game stretches to a modest 6/7 hours run through from start to finish, but with very little reason to have a second playthrough the Raji feels slightly lacklustre. The game is filled with lots of platform and level traversal that would feel very at home in a Prince of Persia title. Raji as an acrobat is believable while climbing walls, leaping from pole to pole and wall running. In combat she has a distinct triple dodge roll move that is available from the very beginning of the game, once again lending to her background as an acrobat. 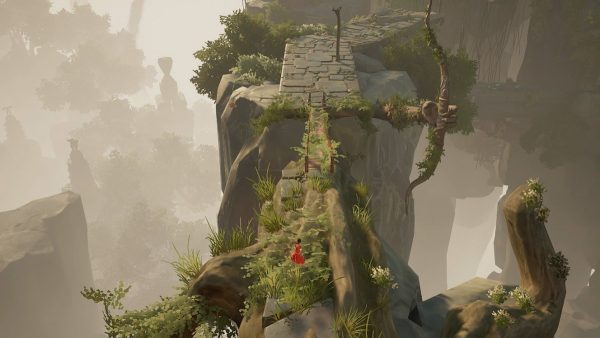 The game grants Raji four different weapons over the course of the adventure, but the first weapon you get appears to be very much the best one to use. These weapons become switchable during combat on the Switch’s D-Pad, though the swapping during combat only appeared to be available once the combat animation of a weapon was fully finished.

In Raji, there are the favour of three different gods to imbue your weapons with elemental effects: electricity for stunning enemies, fire for higher damage dealing and ice for freezing and possible instantly finishing off an enemy. These elements all have their pros and cons and although the ice sounds like the best option, you can forego the “A” prompt for a killing blow and regaining health. It appears to be a trade off for superior damage while removing any chance to heal because healing can only be found outside of combat if you search obscure areas outside the direct path. 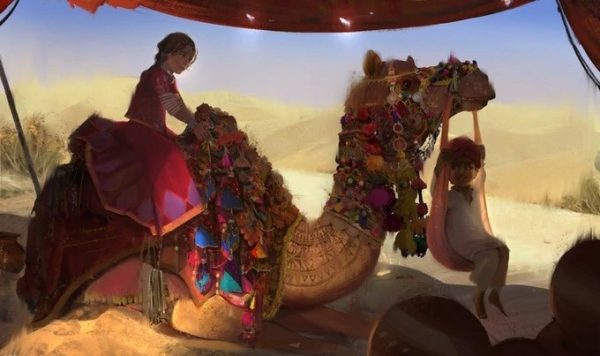 Raji rewards exploration of levels by hiding upgrade orbs in corners that are off the normal beaten path or at the end of more difficult climbing sections of the game. These orbs are used to power up different abilities from the gods, allowing you to attune a specific god’s element to a particular weapon. This in theory sounds like a unique selling point, but the menu systems are utterly “hot garbage” and the user interface is very much an afterthought. I tried to avoid upgrading abilities as little as possible as it was actually stressful and irritating.

The game’s music pairs up with the setting very well, helping to lend some authenticity to the landscapes and areas you traverse. That being said the music can be very loud and invasive when trying to focus on combat or the “puzzle” sections of the game.

I played the majority of the game on the Nintendo Switch dock, which on a 50” television showed up a lot of the graphical shortcomings; the textures’ draw distances are not fantastic with some objects textures lowering in quality only after a few steps away from them while very much still in focus. 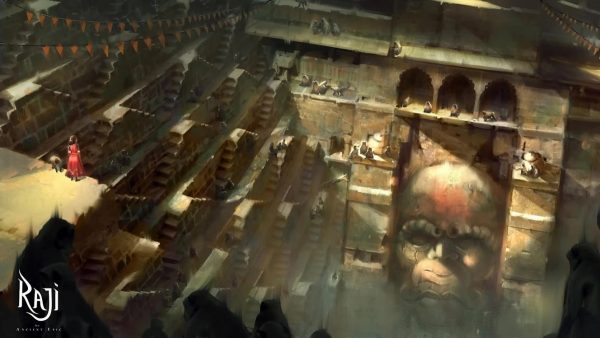 In handheld mode Raji is riddled with frame rate issues when presenting some of the more cinematic elements of the game. The beautiful moments where Raji is on the back of a mythical creature in flight was a poorly rendered juddering mess, taking the beauty away from a stunning set piece and leaving me with a poor experience.

Handheld mode in general is not the way to go with this game, and if  you are playing on the Nintendo Switch try to play docked at all times for a slightly more enjoyable and steady experience. Unfortunately, this will not help Switch Lite owners who do not have the ability to use a dock.

I had severe issues in boss fights with this game where “stun lock” would hit my character and then cause me to go from full health to dead in three hits purely because the combat is wildly unbalanced in most aspects of this game. The combat is less about linking together graceful combos in a Devil May Cry style and more an exercise in button mashing and hoping the collision detection gods are on your side during those moments. The use of dodging will have players mashing the “B” button the majority of time in a boss fight, so much so that I believe I may have lowered the lifespan of my controller dramatically after playing this game. 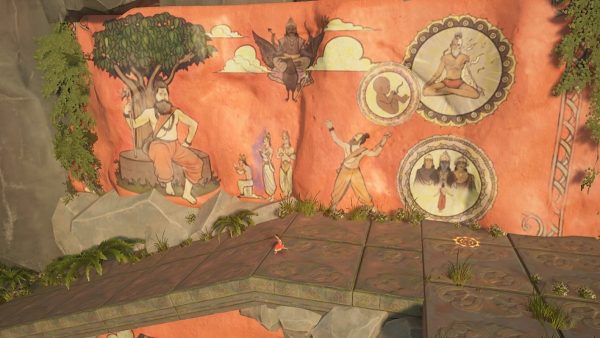 I experienced glitched a number of times during the game where it forced me to actually close the game application and restart because there was no way of getting out of these glitches. One in particular was when defeating the final boss; it triggers a specific animation, but I found myself stuck having to fight the boss once again as there was nothing I could do to trigger the final cut scene. Needless to say, I was extremely unimpressed and frustrated as only after it successfully worked did I realise that I had actually defeated the boss previously.

There were lots of moments where stun lock killed me; when the game puts one Raji against seven enemies and they can all attack independently of one another, it showed the game to have extremely unbalanced combat. The combat in Raji is not enjoyable and often had me turning the game off and coming back fresh later on. The only reason I stuck it through to the end was for the review. It is not a rewarding game and I feel bad saying that as the storytelling and diving into the culture of Hinduism was actually a much more interesting part of the experience. 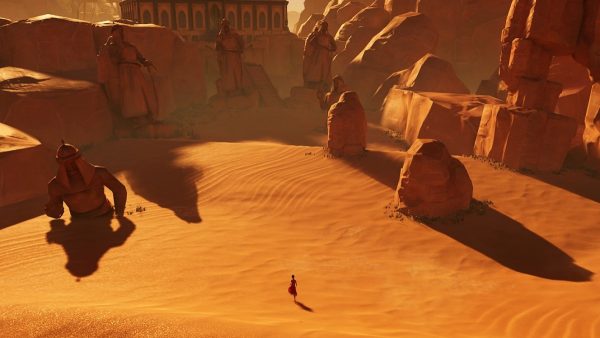 In wrapping up, this is a game with a wonderful story to tell, yet I would recommend for the lifespan of your controller that you watch a stream or YouTube video. The gameplay is buggy and frame rate issues litter the Switch version (possibly when it comes to more powerful hardware it might offer a better experience). I am sad to give this such a low score but the only reason it is not lower is that it tells a somewhat interesting story, and the game is not priced too high at the £22.50 mark. I would not recommend paying anything more, or possibly even waiting until you can pick it up on sale for less.