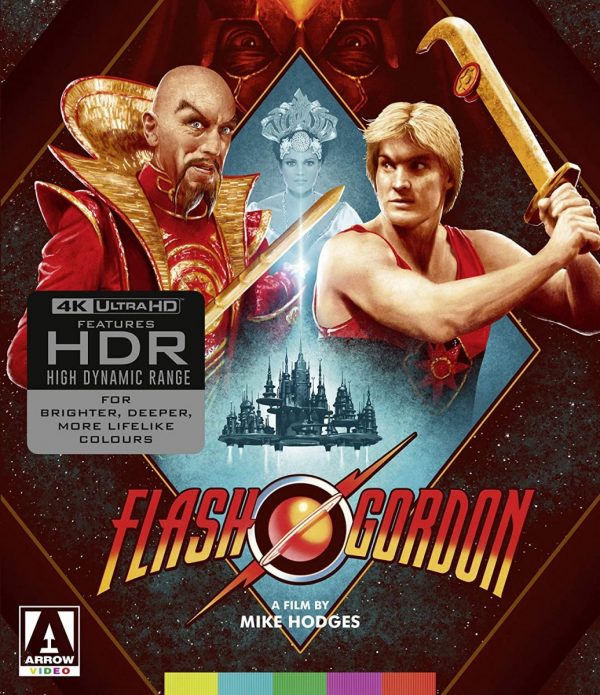 Flash Gordon fans: Run, don’t walk, to snap up this 4K release of the movie that features tons of digital and print bonus stuff, along with a Blu-ray disc with the Life After Flash Gordon documentary and even more extra material. Arrow Video is becoming the Criterion of cult classics.

Somewhere in an alternate universe, George Lucas made the Flash Gordon movie he originally wanted to direct, and it did middling business at the box office before becoming a cult classic. He later directed Jaws 2 because he needed the money, and then his career faded. Recently, a book was published detailing his plans for a movie called The Star Wars, which he spent many years trying to get made. Supposedly Netflix is interested in doing it.

As you can tell, “What if?” scenarios fascinate me. If only this had happened, or hadn’t happened, we might be living in a very different world right now. That’s what was going through my mind when I revisited Mike Hodges’ cult classic Flash Gordon for this new 4K release from Arrow Video. George Lucas originally wanted to get the rights to Flash Gordon, but he couldn’t, and when Star Wars blew up, producer Dino De Laurentiis raced to capitalize on the phenomenon. 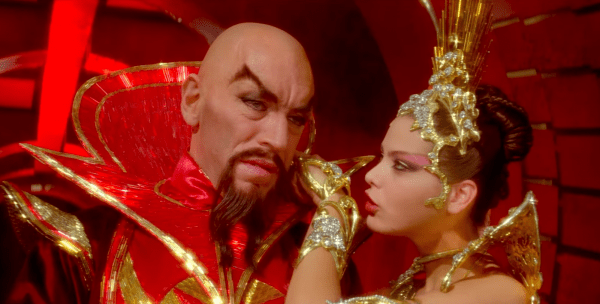 I assume you know all about this film, but if you’re a sci-fi person who hasn’t seen it before, I recommend giving it a viewing to see if it’s your cup of tea. The story is silly and the acting is a mixed bag, but, like Superman: The Movie, it’s a film that stays true to its roots from beginning to end. This is Alex Raymond’s creation brought to life in vibrant color, like an onscreen comic book, and it’s a lot of fun.

StudioCanal put a lot of love and care into this new 4K restoration of the film, which looks better than it ever has on home video. They stayed true to the original theatrical presentation, getting rid of the edge enhancement and digital noise reduction that has made Flash Gordon and many other classic films look a bit plastic-y on Blu-ray. 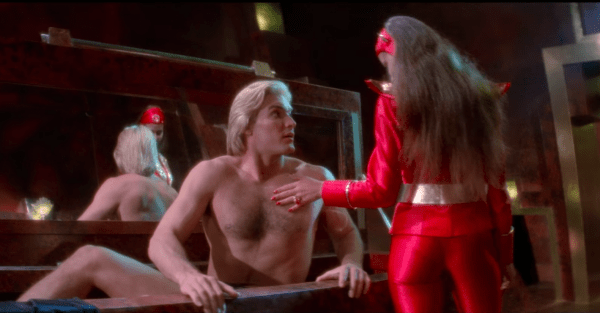 Arrow packaged the film in a set that easily gives Criterion a run for the money. As physical media sales decline, companies like Arrow, Shout!, Criterion, and Kino Lorber are the ones picking up the ball for fans who love something that looks nice on a shelf. In addition to the 4K disc, which is packed with tons of bonus features that I’ll get to in a minute, they included the 93-minute Life After Flash Gordon documentary on a separate Blu-ray that has its own batch of bonus stuff.

They rounded off the box with a double-sided poster, six lobby card reproductions, and a 60-page booklet packed with new cerebral essays of the kind that Criterion likes to commission. The writing includes such observations as: “The film’s Camp approach is also an especially effective way to explore the story’s grim psychosexual dynamics within the context of a relatively family-friendly narrative.” Personally, I think that sometimes a campy movie is just a campy movie, but if that’s your thing, dive right in.

On to the bonus stuff. Not everything that was included in previous home video releases was ported over, so you may want to hold onto that Saviour of the Universe Edition, as well as others. Arrow commissioned some new bonus features for this release, including one that explores another “What if?” scenario: It examines a more serious version of the movie that would have been directed by Nic Roeg.

Screenwriter Michael Allin and others look back on the Roeg version in a 27-minute featurette that offers glimpses of some storyboards, as well as pages from the script. While it seemed to be an admirable effort, plenty of other franchises have cornered the serious sci-fi thing, so it made sense for the final product to go the camp route. If you’d like to consider other “What if?” scenarios for the movie, Allin and others talk about how De Laurentiis also approached Federico Fellini and Sergio Leone. What would those movies have looked like?

The other new bonus features include an episode from a Flash Gordon animated TV series as well as a bunch of interview snippets that were left over from the Life After Flash Gordon documentary on the Blu-ray. They all run a few minutes each. I won’t catalog them all, but note that if you press the right arrow button on your remote in a few spots when perusing the list, you’ll open some Easter eggs containing more interview snippets. I don’t know when the last time was that I came across some Easter eggs on a disc.

Some archival interviews are included too, including a 31-minute one in which Mike Hodges talks about the film as well as his overall career; nine minutes with screenwriter Lorenzo Semple, Jr., who worked on the campy TV Batman series, among other things; and 13 minutes with famed comic book artist Alex Ross, who is a huge fan of the film. 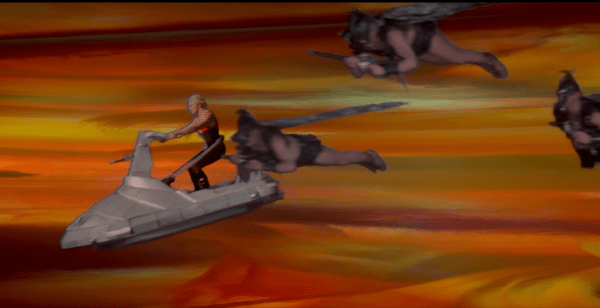 Moving on to the featurettes on the 4K disc, there’s the aforementioned one about Nic Roeg’s version of the movie, as well as:

Finally, three commentaries round out the platter. The first one, with Hodges, is a stately affair. As the interview with him shows, he’s a Brit who speaks at a measured pace and can sometimes drone on a bit. However, the second track, with fellow Brit Brian Blessed, is a blast. He pops up in many of the interview snippets on the disc, and he’s the same animated, gregarious guy here. Who wouldn’t want to have a beer (or two, or three) at the pub with him?

The third commentary is dubbed “Big Kev’s Geek Stuff.” It’s from a 2007 radio show in which Flash Gordon fan and super collector Bob Lindenmayer (he pops up elsewhere on this disc) and co-host Kevin Schoebel talk to cast members Sam J. Jones (Flash) and Melody Anderson (Dale Arden). It’s a fun chat that offers some insight into the film while sometimes lapsing into what you might call a sibling rivalry between Jones and Anderson. Jones has obviously spent a good chunk of this century embracing a role that he previously didn’t want to do much with, due to his conflicts with De Laurentiis, and it shows here.

Okay, now for the other disc in this set, which is a Blu-ray. The centerpiece is that Life After Flash Gordon documentary. Director Lisa Downs explains in a bonus interview that she originally conceived of it in 2014 as an examination of Jones’s current life, which centers around his work as a security guard for VIP clients going in and out of Mexico, but she ended up expanding it to include an examination of the fan phenomenon around the movie. I was surprised to find out that not only is Flash Gordon a bigger deal in England than in the US, but it’s actually considered a favorite holiday movie. 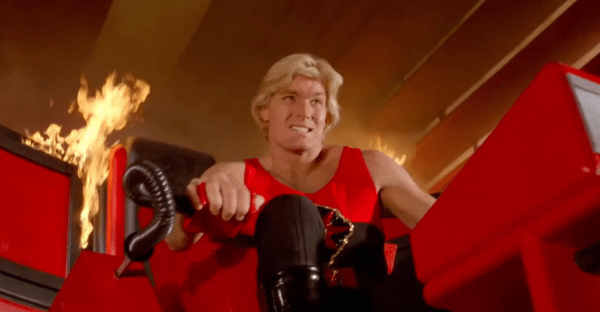 I won’t catalog all the interview snippets found on this disc too. Suffice it to say that they feature cast members and fans talking about all kinds of stuff. Comic book fans will probably be really interested in the nine-minute piece with Alex Ross, who shows off the only surviving page from a comic book adaptation of the movie that he created when he was a kid. There’s also an extended 13-minute comic con sequence that reminds me of when I used to hit that circuit on a regular basis.

This isn’t the ultimate Flash Gordon home video release, since not all the older bonus stuff was ported over, but if you’re a fan, this edition should be more than enough to feast on until 8K arrives. And props to Arrow Video and StudioCanal for bringing this to life.