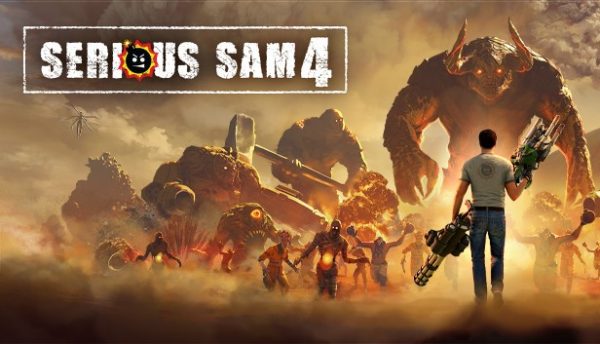 Like so many young PC gamers growing up in the early 2000s, Serious Sam was a major component of my formative FPS education, a glorious exercise in low-fuss, high-mayhem entertainment; taking down Scythian Witch-Harpies by the bucket-load with extreme prejudice.

The question arises, then, as to how returning developers Croteam can update the long-in-the-tooth formula for 2020. After all, Duke Nukem Forever proved the many pitfalls of a classic FPS franchise refusing to move itself forward, and similarly, Serious Sam 4 feels frustratingly stuck in the past, using the guise of nostalgia to offer up a sub-par, grossly dated product.

A prequel to 2011’s Serious Sam 3: BFE, the fourth game once again sees Sam “Serious” Stone fending off an alien invasion courtesy of the mysterious alien entity Mental, while teaming up with an unlucky assemblage of oddball commandos. And while the narrative is a little more involved than fans might be expecting per the series’ tradition, it’s still anything but the selling point.

Serious Sam has and hopefully always will be defined by its sheer balls-to-the-wall intensity, and it’s thankfully the one thing the game truly gets right. The stress of strafing and backpedalling your way around expansive arenas as a relentless horde of enemies descends on your position is palpable, and absolutely thrilling when you’ve got the requisite firepower to melt them nanoseconds before they overwhelm you. 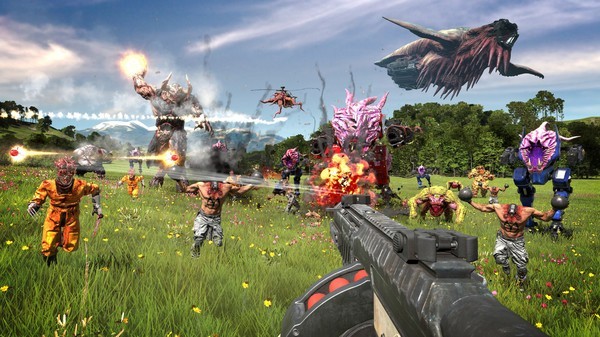 Croteam has made a lot of fuss about the game’s Legion system, which allows for an unprecedented number of enemies to appear on the screen at once, a feature that’s certainly impressive to an extent. It’s both hilarious and terrifying trying to make an efficient sprint through a level, only to turn around and hear the war cry chorus of the iconic Beheaded Kamikaze running towards you en masse. Destroying them with the game’s not-quite-silly-enough arsenal of weapons is at least a giddy moment-to-moment thrill, for sure.

But all in all Serious Sam 4 is a game defined by fitful pleasures and prevailing blandness, as so much of it is an exhausting endurance trial which feels like it quantum leapt into 2020 from 2001. The gameplay loop of shooting your way through labyrinthine mazes and arenas, finding keys, and battling bosses becomes relatively tiresome after just a few short hours, made worse by the fact that it’s not a particularly short game, either. Not even some periodic vehicular and mech-based sequences can do much to break up the monotony.

Though the more involved approach to story does bring a little added dynamism to the table – there are even honest-to-God, minutes-long cutscenes between missions – it’s ultimately pretty low-effort and throwaway. It’s full of corny one-liners like “come get your chili con carnage!,” and jokes about Uranus that would make 8-year-old kids groan with embarrassment. In the very least, nobody will confuse it with a game taking itself seriously.

Beyond the repetition of the core gameplay, Serious Sam 4 is, despite its surprisingly beefy system requirements, rather drab aesthetically, and made all the worse by the game’s technically roughshod presentation. 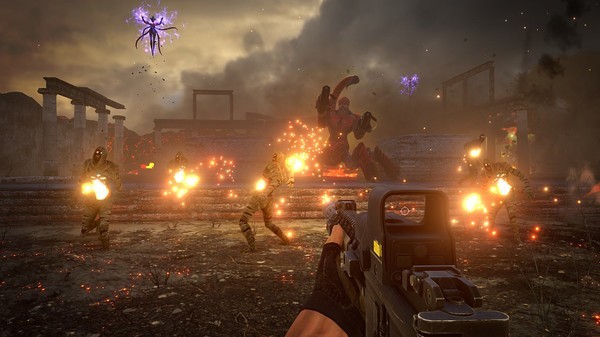 If some of the large-scale mayhem does look half-way impressive, and the monster designs are certainly appealing, the textures generally look years out of date, especially the dead-eyed character models which wouldn’t seem out-of-place in a game released a decade ago. Hell, even something as basic as the weapon wheel looks unmistakably cheap and garish.

Though mileage will absolutely vary between systems, it has to be said that Serious Sam 4 is the worst-optimised PC game I’ve played in quite some time. On a rig which can play most recent games to a high level of performance no problem, I found myself tinkering excessively with the in-game settings to achieve a smooth framerate – though the release day patch did markedly improve performance, it has to be said.

Beyond that, there’s heaps of graphical pop-in on offer, and bizarre technical issues like subtitles not being synced up with dialogue at all times. I also encountered numerous crashes during my playthrough, which even resulted in some of my autosaves becoming corrupted and unusable, forcing me to go back to an earlier save (which, mercifully, only resulted in a few minutes of play lost).

And that brings me to checkpointing and autosaves, both of which are wildly inconsistent here. Seemingly on a whim, the game would either decide to fling me back 15 minutes to the start of a prolonged, multi-phase set-piece, or autosave in the midst of a battle which would re-load me with low health and a stampede of enemies mere seconds away from my face. The game is clearly acutely aware of the issue, though, given that it even advises players to load up a previous save if the current one isn’t adequate. 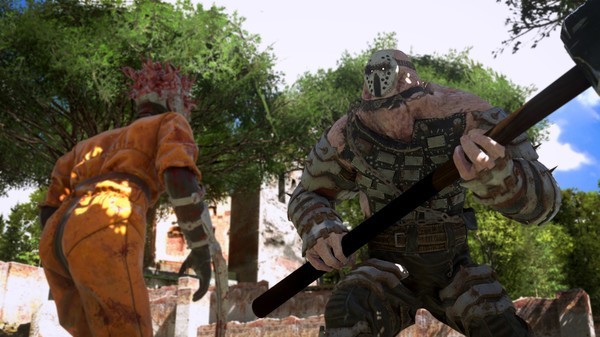 I found the system frustrating enough that I deigned to “save-scumming” or simply dropping the difficulty lower in certain sections so I could make it through, which is far from an ideal way to play. Some may relish the repetition-heavy level of challenge even on Normal difficulty, but with a save system so infuriatingly archaic, the fun quickly evaporates.

As much as this review may suggest Serious Sam hasn’t moved on at all in its new release, that isn’t quite true. Beyond the aforementioned Legion system, the game does feature an upgrade tree, which players can expand by collecting Sirian Artefacts of Might (S.A.M., get it?) scattered throughout the levels. It’s relatively shallow, but at least introduces something a little more modern into the central loop, as well as newfangled abilities like – gasp – dual wielding.

In terms of added value, there is also 4-player co-op available, which if nothing certainly has the potential to make the central grind more tolerable. Unfortunately even on launch day I couldn’t find more than a few matches in the server list, which without any sort of drop-in, drop-out facility is enough to kill the co-op for anyone not able to play with friends. The lack of PvP multiplayer is also hugely disappointing; what better way to pay homage to the classic FPS than with some stripped-down deathmatch? Alas, it’s nowhere to be seen.

Serious Sam 4 aims for retro throwback but ultimately settles for straight-to-video, squandering its occasionally inspired mayhem on charmless repetition. Without the sufficient personality to back up its prolonged blast-a-thons, this is old-school to a fault, though might earn more forgiveness from fans simply happy to play another entry into the franchise. 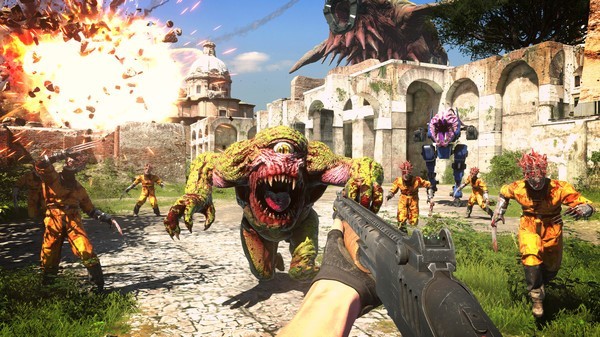 Pros:
+ A faithful throwback to the prior entries.
+ Impressive huge-scale combat.
+ Co-op is a major plus (if you have friends to play with).

Reviewed on PC (also available on Stadia, with PS4 and Xbox One releases planned for 2021).