Xbox Games with Gold for November 2020 has been revealed and it’s a right mixed bag so hopefully there will be something there for everyone to enjoy while the country goes into various levels of lockdown.  As usual, there’s still time to download the Games with Gold that October brought us so don’t dally. 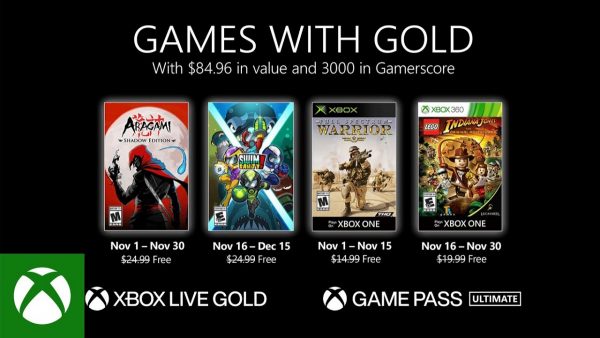 Throughout November subscribers can get their hands on Aragami: Shadow Edition and become a vengeful spirit with the power to control the shadows.  Become the spirit Aragami and embark on a dark journey after being summoned by Yamiko, a girl imprisoned in the city fortress of Kyuryu.  Use supernatural powers to infiltrate the city and uncover the secrets that lead to the truth about two souls bound together.

From 16th November until the middle of December, gamers can get hold of Swim Sanity.  This multiplayer underwater shooter is jam packed with Co-Op and Versus game modes, devastating moves and more than 150 challenges to complete.  Team up with friends in the game’s Adventure Mode or prove who’s the strongest Mooba in Last Mooba Standing.

Until 15th November take a trip back to 2004 with Full Spectrum Warrior.  Become a squad leader of the US Army Infantry and command Alpha and Bravo squads through infantry-level urban warfare via unique tactical action gameplay.  Danger lies in wait down ever alley and behind every curtained window so ensure your tactics are sound before sending anyone into a vulnerable position.

Finally, November’s Games with Gold are ending on a particularly high note as subscribers can download Lego Indiana Jones: The Original Adventures.  This is an absolutely brilliant game filled with all the humour that has made each and every one of the LEGO games so enjoyable.  Become Indiana Jones or take control of more than 80 characters from the films and discover secrets, solve puzzles and more in the settings of the first three films.

Look out for these games coming this November to Games with Gold and don’t forget to download October’s games while you can.