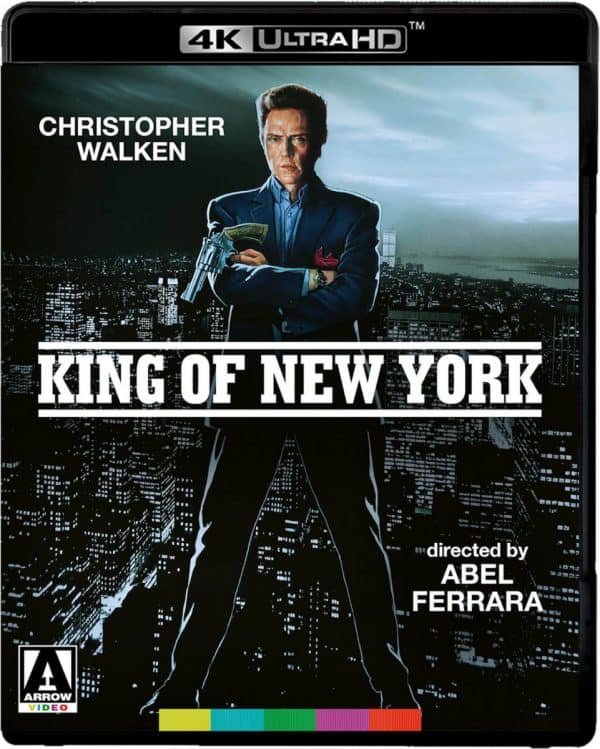 A drug lord is released from prison and sets about taking over the crime gangs in New York in order to put money back into his old neighbourhood. 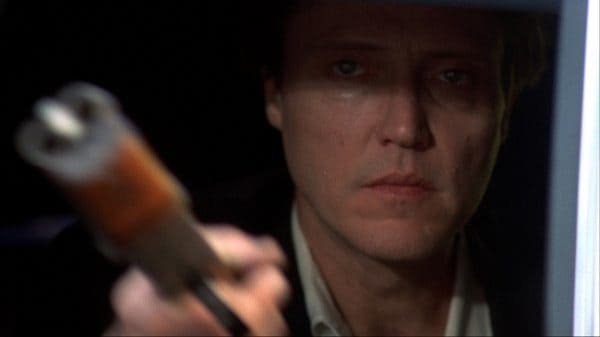 When you look at the history of cinema there are often films that are released around the same time that never quite get a look in or reach the same status as the so-called ‘classics’. These films are often just as good – if not better – than their more successful brethren but don’t get the same exposure and usually get branded ‘cult’, which is a word that gets used far too often and often loses much of its meaning. However, Driller Killer director Abel Ferrara’s 1990 film King of New York certainly fits the bill as a cult movie and one that blows away many similarly-themed and more successful crime movies from the time.

Crime lord Frank White (Christopher Walken – The Dead Zone) has just been released from prison and returns to his old haunts to start strong-arming the other gangsters who have moved in on his territory. Looking to add a little legitimacy to his image Frank decides he wants to become Mayor of New York and sets about wiping out his criminal competition in a bid to clean up the streets, have total control of all operations and distribute his wealth to the needy and poorer parts of the city. Catching the attention of the authorities, Frank becomes the prime target for a group of strung-out cops determined to put him and his rapidly expanding gang of enforcers away but the lack of evidence means they may have to turn to more unorthodox methods to achieve their aim. 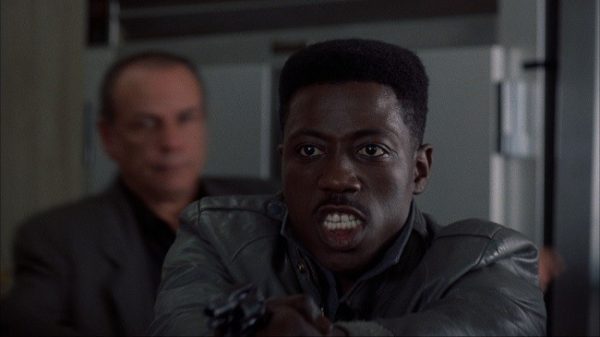 A slightly twisted take on the Robin Hood theme, King of New York has enough clout and star power to have been a sizeable hit upon release but unfortunately it was released on the same day – not just week or month but day – as Martin Scorsese’s Goodfellas, which is pretty big competition if you’re going to release a gangster movie. No matter, though, as King of New York has a flavour all of its own which eschews the polished glamourising of Scorsese’s mobsters in favour of Ferrara’s trademark grittiness.

Undoubtedly the star of the show, Christopher Walken oozes dark menace in a way that none of his onscreen personas before this had done. There is a scene where Frank White is sat in a cinema with Triad leader Larry Wong (Joey Chin) watching F.W. Murnau’s 1922 classic Nosferatu, and Walken’s own performance can be likened to that of the vampire – cold and soulless, yet calculating with a simmering rage that threatens to boil over at any given moment. His movements throughout the film are also comparable to those of a monster movie villain, swiftly observing the carnage around him before making his next crucial strike. 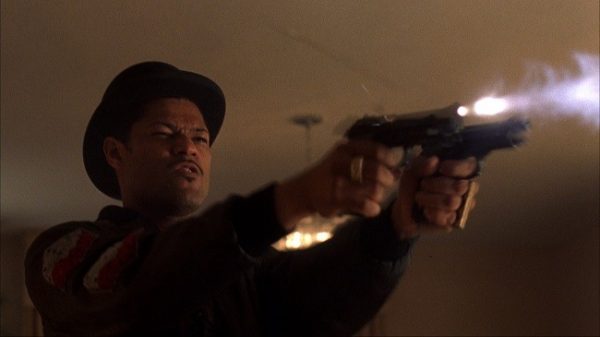 But there are many other notable performances in this film. Laurence Fishburne (The Matrix) is excellent as White’s main enforcer Jimmy Jump, who lacks the fatal charisma of his boss but has more than enough moves of his own to make him an uncontrollable force. Steve Buscemi (Reservoir Dogs) also makes an early appearance as the drug dealing Test Tube (no need for an explanation there), another integral part of Frank’s gang.

Frank’s adversaries are also an intriguing lot, as the law seems powerless to convict Frank so they take matters into their own hands. Wesley Snipes (Blade) plays Flanigan, who seems to have a bit of a rivalry with Jump, but it is David Caruso (First Blood) as the reckless Dennis Gilley who provides most of the best moments in his confrontations with Frank and his hoodlums. He is also the main focus of one of the films’ most shocking moments. 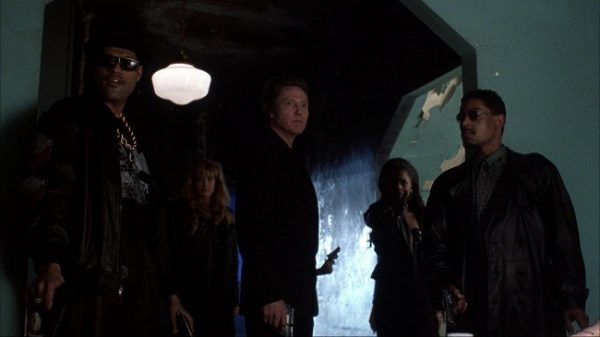 This 4K version of the film is simply stunning to look at, with the rich colours that Abel Ferrara washes his shots with contrasting perfectly with the deep blacks of the city streets, making New York as much of a character as Frank White. The famous car chase in the rain looks absolutely stunning and the films climax, set in the neon-lit city streets, is as colourful and striking as it is mean and uncompromising. Thankfully, the audio problems that plagued the previous Arrow Blu-ray release from a few years ago has been corrected with a remixed 5.1 surround sound track that is as crystal-clear as the picture, the numerous gun shots punching through the dialogue to great effect, and the extras have been ported over from the previous release, which include two audio commentaries, a few archive crew interviews and a couple of interesting featurettes about Abel Ferrara and his works.

King of New York is an underrated gem that got a bit buried upon its original release. It hasn’t dated as badly as a lot of the crime/action thrillers of the late ’80s/early-’90s – in fact, it looks pretty damn good considering what the fashions were like at the time – and even the pumping hip-hop soundtrack doesn’t seem too incongruous when compared to some of today’s standards. Christopher Walken gives what is likely his best performance here and is probably his last proper performance before he started to become a bit of a parody of himself, and the supporting cast are all great, creating some memorable characters which is something that a lot of gangster movies don’t always do all that well. The film looks fantastic, is totally engaging throughout and has some really well-staged scenes that will stick in your mind after the film has finished, and even if you already own it on standard Blu-ray the 4K UHD upgrade is still worth putting your hands in your pocket for as the lush visuals and improved audio make it feel like you’re watching it for the first time again. Overall, a flawless version of a standout of ‘90s cinema as it should be seen.