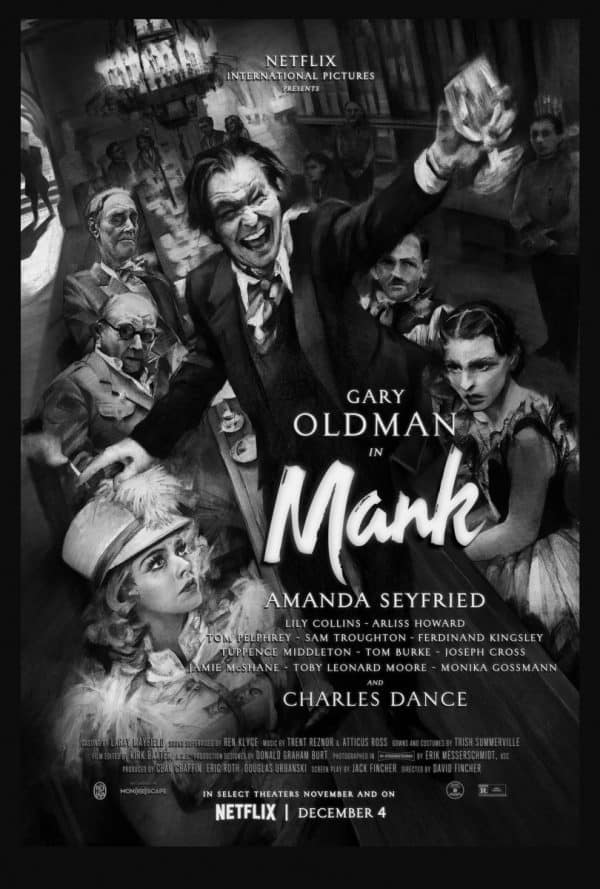 “You cannot capture a man’s life in two hours, only the impression of one”. David Fincher’s latest, Mank (a family heirloom of a script left by his father Jack Fincher) doesn’t just capture an impression of the eponymous Citizen Kane screenwriter Herman J. Mankiewicz, it burns with a revolution against the Golden Age of Hollywood and the slimy backdoor tactics behind the scenes. It’s about a sardonic outcast that has grown tired of serving as a monkey for a system that is firmly planted in greed like molasses and catering to the masses, even if it means removing the Mankiewicz name from credits to appease the Nazi regime and allow the international cash flow from his projects to continue from Germany. Mank is what happens when nostalgic Rosebud-tinted glasses are shattered, left displaying nothing but ugliness and suppressed dreams.

Crafted using similar storytelling techniques from Citizen Kane itself, David Fincher has opted for a series of flashbacks as an injured Herman Mankiewicz (Gary Oldman, once again turning in a phenomenal performance that rises above makeup effects magic) tapped by playwright Orson Welles contracted by RKO to direct at least two features with full creative control. Orson Welles (Tom Burke) is a black sheep himself and someone feared when it comes to catching fire as a filmmaker, so the pairing only makes sense. Though their friendship was short-lived, they would prove to be radicals working within an immoral Hollywood more concerned with cutting pay and squeezing what little money they could from moviegoers during the Great Depression whilst intentionally misleading American citizens politically.

The focus of these flashbacks involves Herman Mankiewicz complicated relationships with Marion Davies (Amanda Seyfried as the radiant leading actress of many comedies and historical films), her newspaper tycoon lover William Randolph Hearst (Charles Dance, as malevolent as ever with the body language of total control) choosing the trajectory of her career regardless of what she wants resulting in placing her in vanity projects of his own desire, MGM executive Louis B Mayer (Arliss Howard) only concerned with engineering movies for mass appeal, and a handful of others suffering from the corruption. Essentially, it’s a window into how the former two became the harshly represented basis of some Citizen Kane characters. When it comes to Mank and Marion it’s a bit more complex given the unfortunate things they do have in common, but for William Hearst, it’s a political skewering.

Mank is decidedly a far more political film than expected, which shouldn’t be that surprising given the character of Kane, but where this biopic is just as equally pointed to be emotionally distant it makes up for it with a reflection of our own political landscape whether it’s the manipulation of information towards the general public, business moguls doing whatever they can to make the rich richer, or the disheartening amount of votes towards for a Republican Party that doesn’t care about the working-class (here in the form of a gubernatorial California election). David Fincher works of a restrained outrage at the behavior of these industry titans.

That’s not to say Mank is given the hero worship treatment here, as he is presented as a degenerate gambler, unable to get a grip on his alcoholism, and among his trademark wit, fairly cynical about this whole Citizen Kane screenplay until the personal touch adds a burning spice setting each page ablaze with the fire of the greatest thing he has ever written. Instead, it’s about the essence of the man and everything he stood up against, coming to be defined as an artist that fought against simplifying entertainment and the corporate shills that only answer to the almighty dollar.

Visually, Mank is a black-and-white stunner, a visual achievement that stands on its own while lifting deep focus techniques and more mastered on the making of Citizen Kane. Sonically, it’s unlike anything Trent Reznor and Atticus Ross have ever done given the old-timey feel of it all, but if one listens close enough there is a hint of that angst the musicians are known for and that is driving Mank. It’s also marvelously acted with Gary Oldman letting loose a belligerent drunken tirade for the ages. No one can blame him as we vicariously witness what goes on behind closed doors.

Jack Fincher’s script is packed with so much detail and personalities of the time that repeated viewings are almost mandatory, whereas David Fincher’s captivating direction makes that an easy task to take up. Yes, Mank is a love letter to an extent (filmmaking techniques, monochrome aesthetics, period piece specificity), but any semblance of romanticism stops as Herman navigates corrupt capitalism. At that point, it’s more of an expose, that regardless of how much prior knowledge you bring into it, is never anything less than scorching.