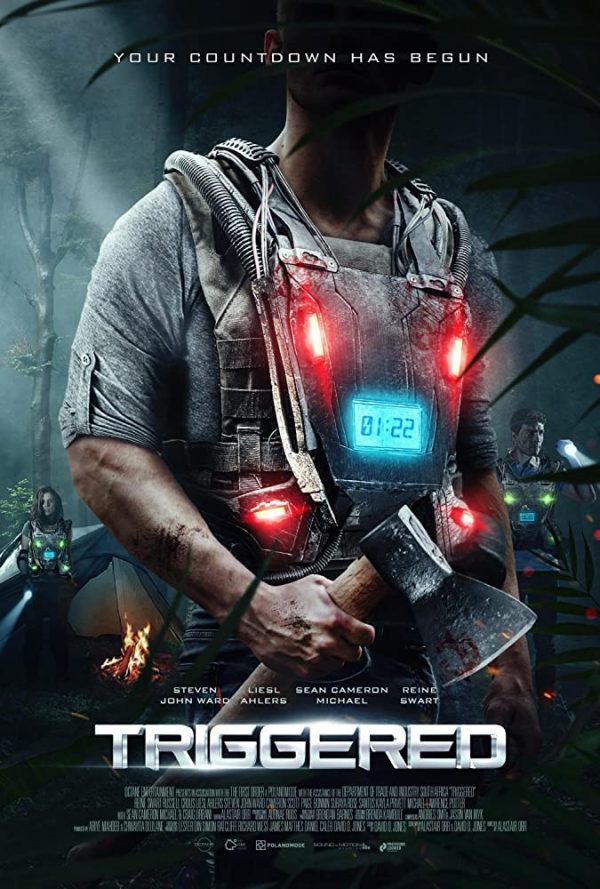 Nine friends, all harboring a dark secret, go camping in the woods. After a wild night of partying, they wake up with SUICIDE BOMBS strapped to their chests, all with varying times on their countdown clocks. They decide to work out how to disarm the bombs or find help – until they discover they can ‘take’ one another’s time by killing each other.

It takes less than 10 minutes to come to the conclusion that none of these nine college students drinking and camping out in the woods are likable. Triggered is all the better for that, as its premise (Alastair Orr is directing a story from debut writer David D. Jones) is entirely implausible, far-fetched, and requires a combination of selfish and stupid characters to work. In this case, it’s a group of millennials familiar with one another from high school, banding together for a night as a dark secret bubbles to the surface amid a twisted torturous game that would slide right into a Saw game of morality and death.

Admittedly, they are thinly sketched (they can mostly be reduced to one-word characteristics such as nerd or idiot or adulterer, and so on and so forth) but not always to a fault, as once they are established alongside some friction between couples and closest friends, the film lets loose pitting them against one another in a bid for survival that provides a nonstop adrenaline rush of depravity, an overabundance of gore, and a slick look in the form of stylized LED lights reflecting off the bombs strapped to the nine unwilling participants. At one point, a character decides to stick around another character despite being told by that person “if you’re not using someone you are being used”, which is the kind of bad decision-making that would normally be enough to sink a thriller, but not here given that Triggered has one wicked encounter after another to fall back on where people either discover they are capable of murder, understand more about the rules of the deadly game, or plot schemes/betray one another.

It is sick, delightful fun right up until it’s a one-two punch of bombastic finale punctuated by one of the hardest laughs I’ve had from a movie all year, that also confirmed the filmmakers were self-aware of the absurdity. Even a late story swerve that is both predictable by the rules of cinematic storytelling but also unexpected given how flat out ludicrous it is yet still not enough to hurt the overall experience. If anything, you just roll with it gleefully looking forward to how it’s all going to end.

As for the actual story, it’s best to say as little as possible and leave it at nine supposed friends (there’s definitely something more that could have been explored when it comes to growing up and entering adulthood with friendships fading between people that never understood how they were friends in the first place) getting knocked out by toxins and waking up with individual bombs strapped to their chests complete with countdown timers. What can be said is that only one winner is allowed and more time can be earned by murdering others. Obviously, when someone’s time expires they explode into chunky flesh.

For as difficult as it can be to accept certain character’s decisions, as Triggered goes on they emerge on different ends of the moral spectrum, sometimes within blurred lines. One of them also happens to be a straight-up psychopath who is having too much fun killing friends while also quipping some despicably dark jokes that work given the genre. Without spoiling too much, there’s a line involving a wedding ring that comes as a precursor to a moment of violence that kept me cackling as the two then started throwing down. Russell Crous is so committed to playing this repulsive character and having such a blast that it’s easy to see his career going somewhere.

Speaking of additional projects, without a global health crisis, and with Triggered getting a wider release (unfortunately, this was unlikely to happen regardless), it has all the ingredients to become the next horror cultural phenomenon of a franchise. There are a handful of movies I wish I could have witnessed as a communal experience and Triggered is high on that list, even if it falls shy of greatness. The script itself is amateurish, but the direction takes the concept and runs with it full throttle leaving behind an exuberant bloodbath.