At this year’s Game Awards Capcom announced two new titles for the Nintendo Switch, Ghosts ‘n Goblins Resurrection and Capcom Arcade Stadium.  Both titles will launch next February and pay homage to some of the most memorable and loved games ever to come from this veteran developer.  Old school gaming fans may enjoy the new trailers below… 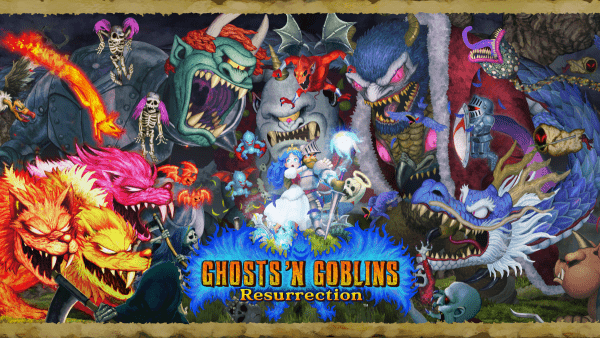 Ghosts ‘n Goblins was hugely popular on the arcades and old 8-bit machines back in the day and now, 35 years later, it is making its return.  Our friendly and valiant knight Arthur returns to once again save a princess from the grasp of the evil Demon Lord.

Taking control of Arthur, players will need to run, jump and battle their way through the stages of the Demon Realm and wipe out the countless ghoulish enemies that stand in their way.  Use skill and quick reflexes to destroy familiar enemies such as  Zombies, Skeleton Murderers, Pigman and Red Arremer.  Arthur will still have access to his favourite weapons, the Lance and Daggers.

Unlike the original (which I found too hard cos I was rubbish at it) Ghosts ‘n Goblins Resurrection will come with 3 different difficulties: Squire, Knight and Legend. There is also the introduction of the new Page Mode which allows untested apprentices to respawn on the spot with unlimited lives.

Capcom Arcade Stadium will bring all the excitement of classic arcade titles to a new generation of gamers.  This will feature a free download of 1943 – The Battle of Midway and the original Ghosts ‘n Goblins as a stand alone add-on and then give gamers the option of purchasing up to 3 different packs that highlight a different era of Capcom games. These games will feature local multiplayer for the games that support it, and adjustable settings for Game Speed, Difficulty Level, Display Settings and more.

Ghosts ‘n Goblins Resurrection and Capcom Arcade Stadium will arrive on the Nintendo eShop for the Switch in February 2021.