Fast forward to the 1980s as Wonder Woman’s next big screen adventure finds her facing two all-new foes: Max Lord and The Cheetah. There is quickly a sensation of trouble ahead as Wonder Woman 1984 begins with back to back sequences of extravagance that, while admittedly pleasant to watch unfold, couldn’t be more disconnected from one another. It seriously feels like returning director Patty Jenkins (once again collaborating on the screenplay with Geoff Johns and a new addition to the team Dave Callaham) just started shooting action sequences without a script and placed them at the front of the movie, with the result being a blockbuster that takes nearly 30 minutes (and this movie is already bloated at 151 minutes squeezing every last second out of the running time with hurried end credits and opening credits over some Amazonian warrior competition) before getting to some semblance of a plot.

It’s a persistent issue, as an ancient artifact magical stone is introduced capable of granting real-life wishes not just tied to an individual person, but things capable of affecting the world at large. Naturally, Diana Prince/Wonder Woman (Gal Gadot, who is having too much asked of her this time around in the acting department, with certain emotional bits of dialogue inducing cringe), while being skeptical of the mythological tales, decides to silently wish for her deceased World War I fighter pilot love Steve to return, and much to her surprise at an art gallery party he does return inside the body of another human despite looking exactly like and being played by Chris Pine once again (there’s a supremely silly scene where Diana doesn’t recognize him that just doesn’t work). 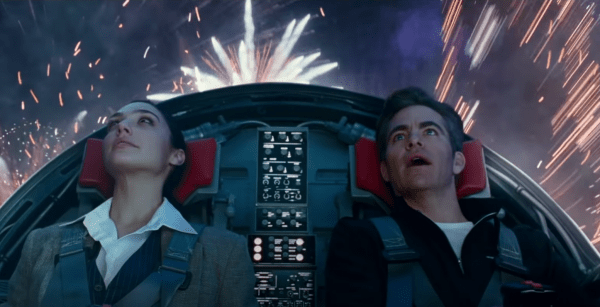 There are also some new characters, mainly a scientist named Barbara (Kristen Wiig, totally wasted and shafted of screen time for what should be a complex villain that needs more focus to function properly) suffering from loneliness and defeated by her awkwardness and inability to socialize that wishes to be like Diana (sexy, intelligent, and strong). Apparently, immediately upon having that wish granted she loses her brain, and even if it is somewhat explained away with some exposition surrounding the way the stone works, some of the plot developments just come across as hilariously dumb contrivances more than anything.

Then there’s businessman Max Lord (Pedro Pascal, who is either going for a Razzie nomination or just knows deep down in his soul that the movie needs something over-the-top to compensate for how boring most of this actually is) who is aware of the stone’s existence and desires to come into possession of it so he can get his oil corporation off the ground and basically go on a quest for world domination. He’s also divorced and gets custody of his young child every other weekend, making for a love that goes ignored throughout his power-hungry rampage. 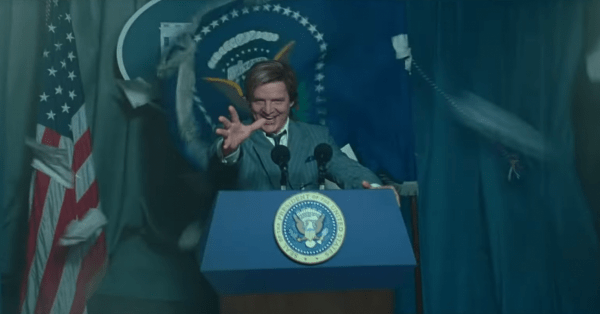 Wonder Woman 1984 clearly has too many moving pieces, meaning it’s not long before the stuff that should be easy to get right such as Diana and Steve interacting once again doesn’t ring as moving as it should. If anything, his re-entry into the universe is met with nothing more than a shoulder shrug and a thought of “I guess no one ever really does stay dead in these movies, so why should I even care what happens from here on out regardless of how this resolves itself”. With that said, there is a segment involving a jet and a fireworks display that is both visually stunning and about the only dramatic scene with any impact.

While I’m not ready to label it a crime that a blockbuster is short on action, it’s also surprising how little of it there is in Wonder Woman 1984, one of the strongest aspects of the first film whether it was patriarchal takedowns such as the No Man’s Land battle or a CGI mess that was forgivable for the character stakes involved. Outside of inspiring shots of young girls – both white and people of color – either being rescued by Diana or being taken aback by her for one reason or another, the action here is nothing more than competently crafted. It’s as if Patty Jenkins and the filmmakers are relying on the character being a symbol of hope and nothing more to cover up the numerous flaws within the film. The rest of the movie is trying to be something serious and outrageously ridiculous all at the same time. There is reverse fish-out-of-water humor given that Steve has been transplanted into 1984 and has no understanding of technological developments and new fashion styles which is decent enough but feels like an unoriginal retread of material, whereas Max Lord is using the stone in a way that makes sense but is nowhere near imaginative enough for what he’s trying to accomplish and for what ensues. Also, for a movie that is supposedly trying to demonstrate the good in humanity, the tone takes a sudden turn into the cynicism that feels entirely out of step with what is being sold here. I guess that’s what happens when your character-driven superhero movie about the pros and cons of wishes out of nowhere becomes a Cold War-era flick. And remember, Barbara is supposed to be the villain here but forget about it; she’s only Cheetah for roughly 5 minutes and one forgettable confrontation.

None of this is to say that Wonder Woman 1984 is a disaster, because when it comes down to it there is still an infectious warm affection for the time period that shines through with a vibrant color palette and impressive shot selection, another rousing score from Hans Zimmer with some appropriate techno thump, and bare minimum entertaining action sequences. The story is just a nightmare of terrible decisions. Wonder Woman 1984 doesn’t deserve comparisons to The Dark Knight; it deserves to be spoken of in the same breath as Spider-Man 3.