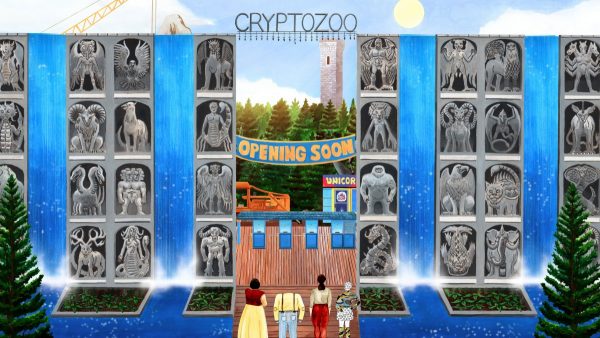 Cryptozookeepers try to capture a baku, a dream-eating hybrid creature of legend, and start wondering if they should display these beasts or keep them hidden and unknown.

Cryptozoo is the weirdest fucking road movie you’ll see this year. Dash Shaw (My Entire High School Sinking Into the Sea) delivers a sophomore feature brimming with wit and vibrancy, even if its aggressively beguiling delivery is surely tailor-made to divide.

Protagonist Lauren (Lake Bell) is a cryptozookeeper – that is to say, she works at a zoo for cryptids such as unicorns, centaurs, and so on. Lauren wishes for the cryptozoo to be a safe haven for the apocryphal creatures, and upon learning that the nightmare-sucking cryptid from her childhood – known as a “baku” – has been kidnapped by the U.S. government in an attempt to weaponise it, she strives to track and rescue it.

And so, Lauren ventures off on a road trip across the U.S. in pursuit of the baku, while joined by her new pal Phoebe (Angeliki Papoulia), a gorgon who wears contact lenses and tranquilises her head-snakes in order to avoid turning everyone she crosses paths with into stone.

It’d be poor form to reveal precisely what happens next, but know that the first 10 minutes of Cryptozoo, featuring full-frontal male and female nudity and also graphic violence, set the tone for what’s to follow. Moreover, this opening scene posits Shaw’s central thesis – can man and cryptid peacefully co-exist in the same space, or should the creatures be left to their own devices away from humanity? 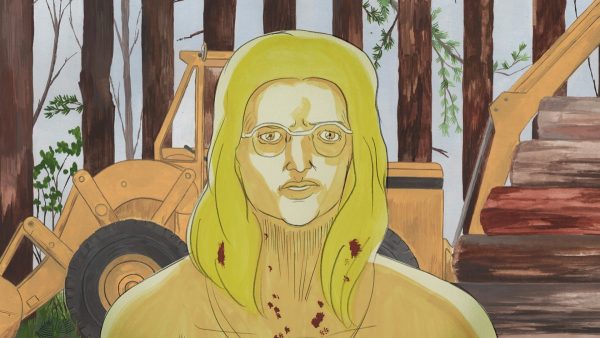 It’s not damning Cryptozoo with faint praise to say that it’s probably a superior experience if you’re high – I wasn’t, sadly – given the commitment to stream-of-consciousness banter between its eclectic cast of characters both human and not.

But the broad beats of the story are actually surprisingly literal and straight-forward for a film that gives off a whiff of abstraction from the parking lot. The A-to-B-to-Z plot is far more accessible than its title, premise, or aesthetic might suggest, such that few are likely to be left wondering what happened, though perhaps how it happened.

The inevitable divisiveness of its narrative is likely to be offset somewhat by the fascinatingly singular animation style, which begs the audience to peer close to their screen and dissect the fine particulars of what they’re seeing. Seemingly incorporating mixed media into its gorgeously messy whole, Shaw’s film melds traditional hand-drawn animation with slapdash paintings to disarming effect.

The unconventional geometry of the world and its characters make it feel like a rough sketch, mostly in a good way, even if the ultra-low framerate will certainly be an acquired taste, especially during its more ambitious later sequences. But the playful expressionism throughout, where even a human face looks slightly off means there’s always something interesting to set your eyes upon.

Yet what really helps the film sustain interest over its 95-minute runtime is the impeccable world-building – a phrase one suspects Shaw himself might cringe at, admittedly. The cryptid designs featured throughout are both beautifully creative and unsettling in their uncanniness; a Peter Stormare-voiced centaur named Gustav, a woman-bird “Alkonost” known as Sasha, a man-ape that enjoys sex with the zoo’s owner, Joan (Grace Zabriskie), and most of all Pliny, a boy whose face is embedded in his gut, because why not?

As much as Shaw lends plenty of personality to these characters through both their designs and the vocal performances, it’s effectively all shoved aside for a third act of Total Fucking Chaos. On one hand the dissociative spectacle Shaw pulls off is impressive, though it’s also less interesting than the slighter character-driven drama of the preceding hour. Yet just as exhaustion threatens to set in, the film ends.

Fans of left-of-center animation will find plenty to savour here, and while the narrative runs out of steam ahead of its climactic surge of action, Shaw ensures that practically every frame of the movie is bristling with detail you’ll want to drink in. The naturally laid-back voiceover performances – especially those from Papoulia, Bell, and Stormare – also fit the material well, and considering the sexed-up nature of his role, just try to watch the film without imagining Michael Cera recording a voiceover sex scene in an air-conditioned recording booth somewhere in L.A.

Cryptozoo is a textbook “not for everybody” film; stridently odd and boastfully explicit, but also a visually mesmerising dose of inspired strangeness.