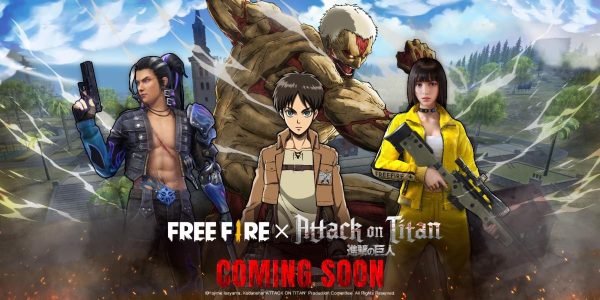 Throughout the event, players will be able to get their hands on some exclusive content, including costumes based on the terrifying Titans, gun skins and other in-game items and collectibles.  Players will also be able to charge into combat wearing the famed colours of the heroic Survey Corps division.

“Free Fire players can soon battle in the style of one of the world’s most captivating modern dark fantasy anime – Attack on Titan. The series has captured the imagination of many worldwide with its unique and immersive narratives; we’re excited to bring this over into the world of Free Fire,” said Harold Teo, Free Fire Producer at Garena.

In the meantime, there’s lots going on in the world of Free Fire with a new season having just started bringing more content to players such as a new buddy revival mechanic introduced in Battle Royale, a new partner system and best of all, a remake of the Training Grounds.  The new and improved Training Grounds are bigger and better and features a full size race track.

Look out for the Attack on Titan/ Free Fire collaboration event coming this March.