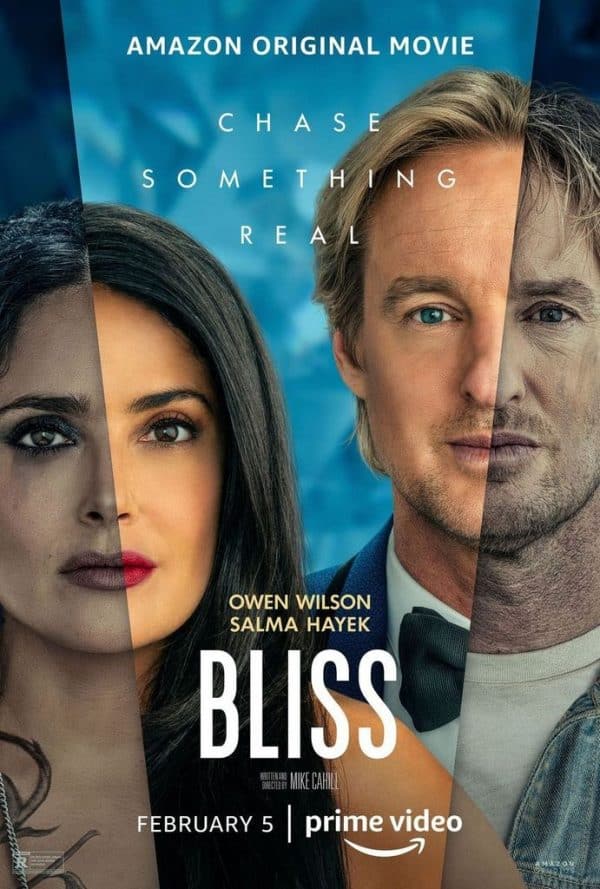 A mind-bending love story following Greg who, after recently being divorced and then fired, meets the mysterious Isabel, a woman living on the streets and convinced that the polluted, broken world around them is a computer simulation. 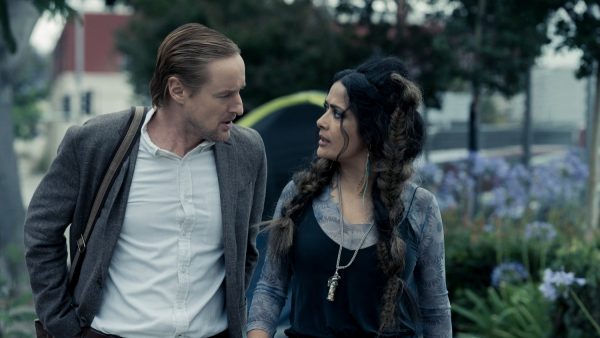 The latest slice of high concept sci-fi from writer and director Mike Cahill (I Origins) Bliss peaks early and is at its most engaging when not really dealing with its simulation experiment of experiencing the good to appreciate the bad. The simulation world itself is where things are more exciting, spontaneous, and unpredictable. Again, the best scene comes roughly 30 minutes into the movie, whereas Salma Hayek’s Isabel is deep into the process of explaining to Owen Wilson’s Greg that they are not in the real world and can treat this version of reality carefree knowing there are limited consequences. This moment arrives at a rollerskating rink where Isabel encourages Greg to take advantage of their telekinesis powers (granted from snorting special yellow crystals that are rare to come by) having him knock down the other skaters. The physical torment is not just for the young and spry, as his last victims are an older couple looking on.

From the superpowered drugs to the sandbox environment where the real inhabitants (Isabel tells Greg that everyone else is an FGP or Fake Generated Person) can cause harm to anyone or anything while maintaining a clear conscience, the simulation is strikingly a lot like an actual video game. Or at least that’s how these characters treat it. The difference is that this reality is not exactly glamorous; it’s intentionally impoverished with Owen Wilson and Salma Hayek purposefully looking nothing like the Hollywood stars they are, rocking ragged clothes and looking like homeless people. Fittingly, the color palette is all monochrome colors, dour, and as depressed as Greg seems to be before he realizes what the place really is. 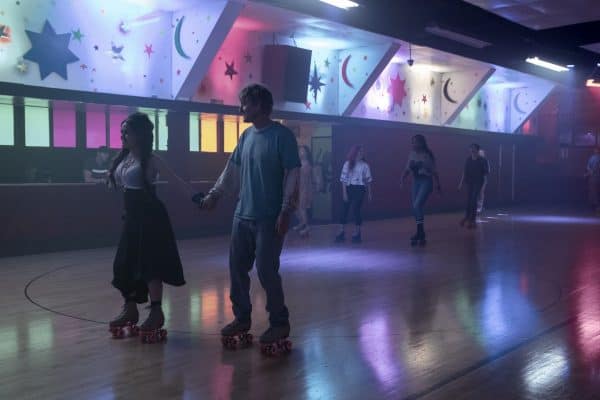 It feels like Mike Cahill has an endless amount of directions to take the narrative of Bliss, which is actually quite energetic, mystifying, and good loopy fun for its first act, before he takes things back into the real world where everything fizzles out. Without saying much, the fictional reality is designed as such to give the citizens of the real world a greater sense of what a bad life is like, as apparently in this real-world all environmental concerns and world issues have been solved. There’s also an amnesia subplot for Greg whereas Isabel has to convince her peers that the purpose of the simulation is effective. If none of that sounds interesting as everything I described in the simulation, that’s because it’s not. There’s nothing especially intriguing to take away from the duality concept, which feels surface level even if there is actually a good chunk dedicated to it.

It’s also worth mentioning that Greg has offspring inside the simulation including a daughter named Emily (Nesta Cooper) desperately trying to reconnect with him before her graduation ceremony. Although Greg is recently divorced from their mom, Emily is pushing for a family reunion of sorts and a celebratory vacation. Naturally, as Greg learns that none of this is real (or is it), he will eventually have to make a decision about which reality he wants to live in given that the ability to transfer between them requires blue crystals that are increasingly becoming hard to come by. The characters also have to deal with glitches in the system from hopping between realities. 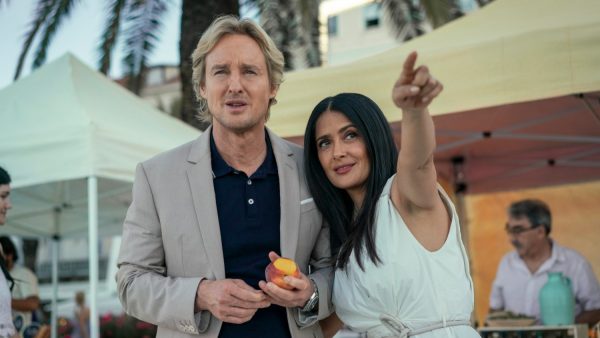 Much of this admittedly sounds clever and unique, and it’s almost worth a watch alone just for the juxtaposition between the lifestyles of the dueling realities and how it affects the appearances of the stars. Unfortunately, Bliss just never comes across anything profound, the story fizzles out, and the ending is wholly predictable to a shocking degree. Also, Owen Wilson seems wildly miscast here approaching some of the more serious situations with his typical nonchalant attitude that could be a stylistic choice but more often than not comes across as an immersion killer. However, it does have some slick visuals, moody music, a nifty premise, and one of the best disposals of a human body you will ever see on screen. Like most positives regarding Bliss, that also arrives in the beginning. I guess you really do have to experience the good to appreciate the bad.