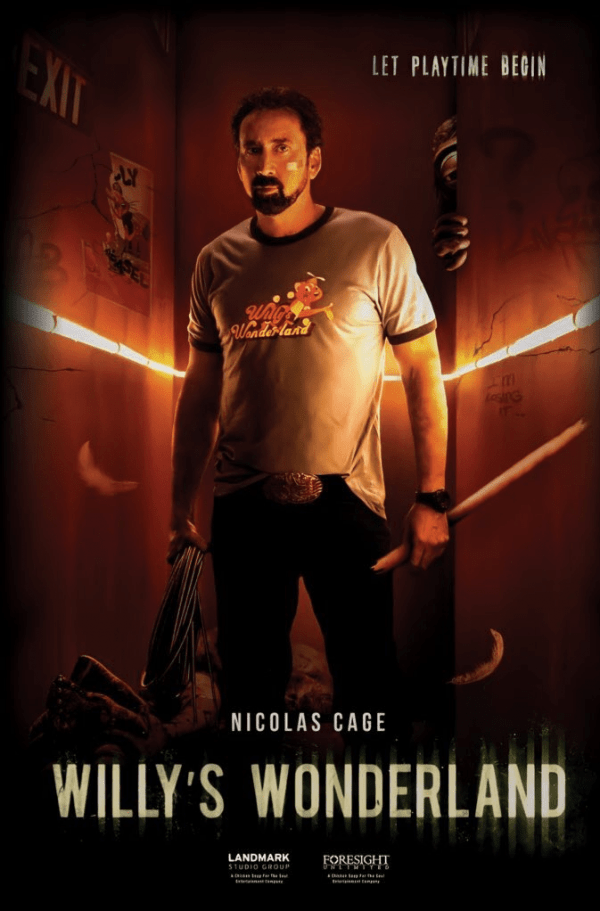 A quiet drifter is tricked into a janitorial job at the now-condemned Willy’s Wonderland. The mundane tasks suddenly become an all-out fight for survival against wave after wave of demonic animatronics. Fists fly, kicks land, titans clash – and only one side will make it out alive. 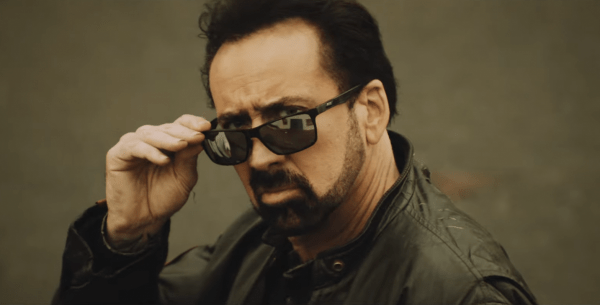 If an unofficial adaptation of the hit video game Five Nights at Freddy’s starring Nicolas Cage sounds like fun to you, then you probably already know you’re going to enjoy Willy’s Wonderland.

The first film in 14 years from director Kevin Lewis (The Third Nail), this efficiently twisted horror-comedy may not give its nutso premise the fully gonzo treatment, but thanks to a stoically brutal Cage performance and some surprisingly solid style, it has cult classic potential written all over it.

A nameless, mute man (Cage) is left stranded in the sleepy town of Hayesville, Nevada, after the taking his car to the local mechanic and having no way to pay (conveniently, the ATM is busted). To work off his labour, the man agrees to take a janitorial night shift at the local amusement park, Willy’s Wonderland. 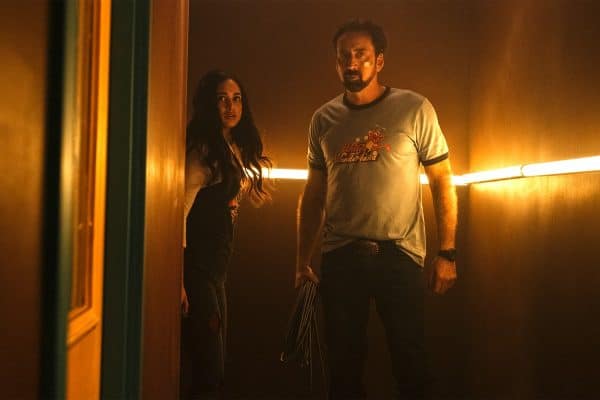 But as he soon discovers, the park is packed with murderous animatronic characters keen to devour him – and also the gang of teenagers who break into the park with the intent of burning it down.

Even for a Nicolas Cage movie, Willy’s Wonderland is out there, as a literally wordless Cage – indeed, he doesn’t speak a line throughout – serves as unwitting protector to a gang of loudmouth, obnoxious teenage meat-puppets.

If that doesn’t sway you, the prospect of seeing Cage curb-stomp a tie-wearing animatronic gorilla mascot into a urinal just might. Though the script feels a few revisions away from truly inspired madcap, there’s still a fist-pumping Neveldine/Taylor energy to the entire excursion, wearing its minimal resources and shameless scuzziness on its sleeve – though for an alleged $5 million budget, it’s surprisingly well-mounted. 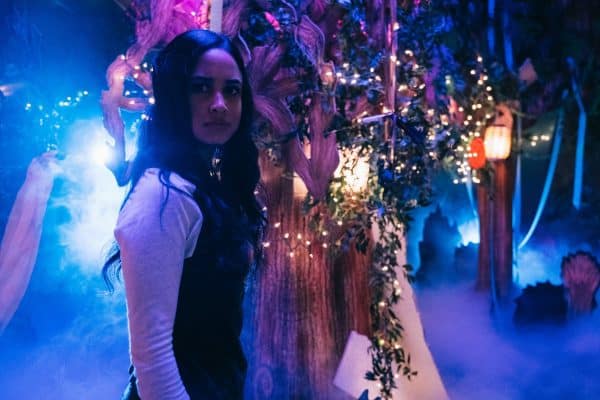 Let’s address the elephant in the room first; for anyone worried this is yet another direct-to-streaming Cage vehicle where he shows up for 15 minutes and slinks off, that’s mercifully not the case at all. Cage is totally front-and-center, baby.

Director Lewis is meanwhile smart not to make viewers wait too long for the action to kick off; by the end of act one Cage’s janitor has already dismantled a couple of blood-thirsty mascots. Lewis also makes the further sensible decision not to rely on chintzy visual effects to bring the animatronics to life, opting instead for the elegant simplicity of actors in suits, focusing on their disconcertingly oversized heads rather than their distinctly human limbs.

The sight of Oscar-winner Cage beating the tar – literally, their “blood” is a black, oil-like substance – out of killer robots is hilarious and never ceases to be for all of the film’s breathless 89 minutes. Sure, shaky cam is deployed to disguise some of the cheapness, but Cage’s creative shit-kicker shtick, ripping out the bots’ circuitry and using their own OTT weapons against them, makes for a ton of fun. That some of these fights are set to the park’s family-friendly music – even “Head, Shoulders, Knees and Toes” – is just the barmy cherry on top. 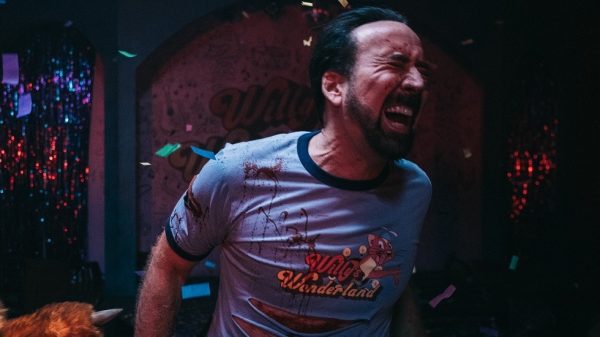 It is fair to say, however, that most of the earlier fights are rather brief and spaced out, Lewis saving the more sustained carnage for act three, while those expecting the premise to tee up some quality Nic Cage freakouts may be slightly underwhelmed.

As Cage’s hero neither speaks nor shouts throughout, the actor instead sublimates his depth of feeling into cathartic violence, wordlessly stomping his way through mascots and utterly investing himself in the physicality, not unlike Ryan Gosling in Drive. When drenched in the black goo of his mechanical victims, Cage is flat-out statuesque.

What continually nudges the film along even when Cage isn’t kicking ass is the genuinely fun creature designs – a demonic mutant Tinkerbell being the easy highlight (and you can practically hear Disney’s lawyers picking up the phone). The actors playing the robots deserve more credit than they’re likely to get for imbuing these antagonists with a creepy tangible quality, without which the illusion wouldn’t work nearly as well. 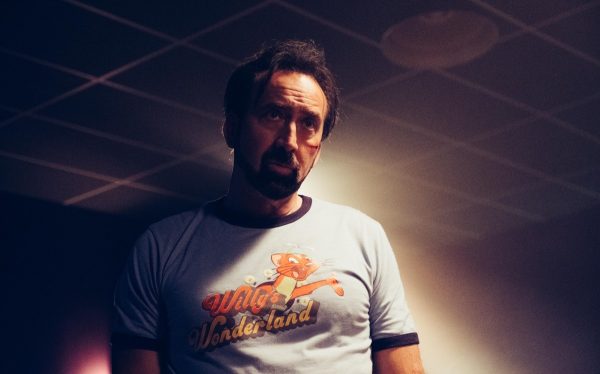 In the human stakes, veteran character actress Beth Grant also shows up in a substantial supporting role as the surly Sheriff Lund. Though she sadly doesn’t get much opportunity to shoot that shotgun she carries around, she gracefully rips through the expository dialogue like a champ, and treats the ridiculous dialogue with the straight-faced portent of Shakespeare. She’s simply too much of a pro to do any less.

The aforementioned teen characters are unsurprisingly a lot less interesting and a whole lot more disposable – but the film at least knows it. Most of the pack aren’t developed beyond being motormouth horndogs, aside from the leader of the group, Liv (Emily Tosta), who has a particularly personal motivation for torching Willy’s Wonderland to the ground. If her expository line reads can’t match Beth Grant’s, she’s at least amusingly bunny-stunned when serving as witness to the janitor’s rampage.

All things considered, Willy’s Wonderland doesn’t go full-tilt wacko and even oddly eschews the neon-signposted potential for a more expansive sequel, but Cage acolytes will likely relish the simmering, ultra-violent intensity of his performance above all else. And you briefly get to see him dance, too. 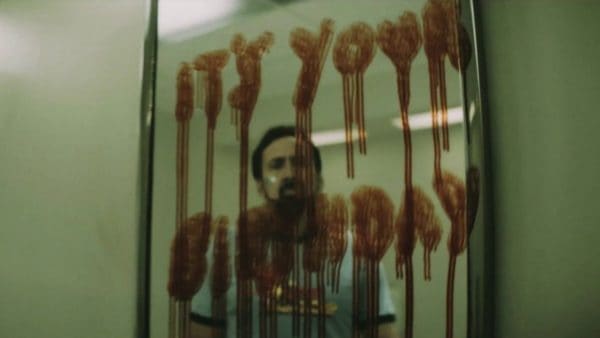 It’s a shame cinemas aren’t open worldwide right now, because thing would kill on the boozy midnight movie circuit. The cult potential speaks for itself even if Lewis could’ve taken things much further, and those hoping for more indelible Cage insanity will, by the nature of the role, have to adjust their expectations a little.