Techland have announced the arrival of two lost vikings into the world of Dying Light after their search for Asgard went disastrously wrong.  These two violent berserkers are available to purchase now from the online store.  Also announced is the start of the Lunar event where players can join in the celebrations for the Year of the Ox.  There’s some new trailers below showing the new content. 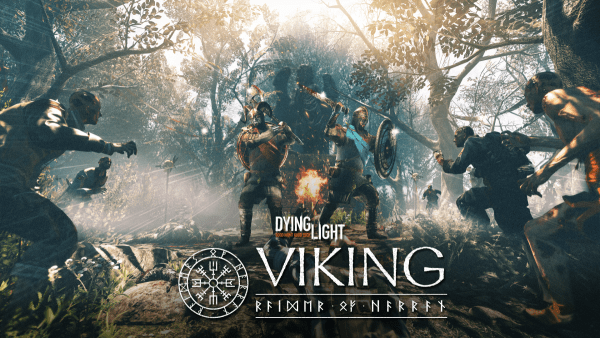 With the Viking: Raiders of Harran Bundle players can become a true Viking warrior with two new characters – Björn the Warrior and Björn the Berserker.  Players who prove themselves worthy will be equipped with deadly weapons forged in a far away land and designed specifically to kill zombies.  These new weapons include the double handed heavy axe Ragnarok, Aesir the one handed sword and the Viking shield Asgard’s Protector.  Each piece of equipment comes in two variants, one that causes fire damage and a standard variant.

Also included in this new bundle are two new Berserker’s buggy skins – Reinen and Fiery Reinen.  These skins are inspired by Norse longboats which roam the uncharted land of Harran.

Players can also jump in to the Chinese New Year celebrations with the new in-game Lunar Event.  This event will offer a new weapon to help rid the world of the zombies, this is the Gold Dao Sword and King Mods.  Players will also receive the free Ox Warrior Bundle, which includes the Ox Cannon Weapon and Ox Warrior Character Skin.

The premium Viking: Raiders of Harran Bundle and the free Ox Warrior Bundle are available now from the in-game shop on Xbox One, PS4 and PC.