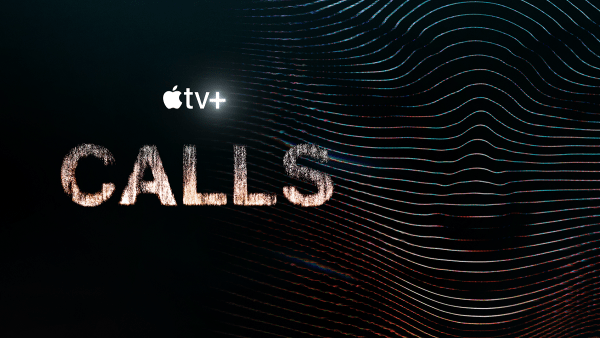 Adapted from the French short form series and written and directed by Fede Alvarez (Evil Dead, Don’t Breathe), Calls is a strange proposition for consumers of conventional content. Split over nine episodes varying in length from fifteen to twenty minutes, this format is reminiscent of a radio play. Featuring an all-star voice cast including Aaron Taylor-Johnson, Karen Gillan and Pedro Pascal, Calls relies on pitch perfect portrayals to instil dramatic intent.

From botched bank robberies to adulterous liaisons, these claustrophobic vignettes incorporate lo-fi visual effects, projected dialogue and abstract resolutions. Fragmented exchanges only add to the drama, as audiences get limited information. Bad connections, interrupted exchanges or segues into the unexplained give everything a Twilight Zone edge. This method of drama also demands that audiences listen, invest and engage through imagination.

Pivotal plot points are given but atmosphere and thematic undertones are open to interpretation. Domestic break-ins, alien invasions and moments of dimensional time travel are all inferred between characters that make this live and breathe. Similar to the seminal broadcast done by Orson Welles in 1938, when he managed to convince America aliens were coming, Calls comes with its own portion of paranoia. It consistently asks audiences to examine their own internal darkness aided only by individual experience, making this a uniquely subjective series for all concerned.

Only the emergency services remain consistent, in a show which trades on ambiguities and implication. There are no weak links amongst this star-studded cast of character A-listers. Confusion, conceit and abject confidence converge with the hysterical, as conflicting agendas clash. At fifteen minutes for the shortest short story, Calls also remains accessible as important moments are often specifically self-contained.

Experienced as either an ensemble piece or individual act one plays, Calls is consistently satisfying and never outstays its welcome. The vicarious nature of construction encourages discomfort in its audience, who are asked to eavesdrop on conversations of a personal nature. It is intended to catch listeners off guard, put them on edge and suck them in subtlety.

For the most part this tactic is very successful, since smart phones have become a natural extension of our entertainment experience. By splitting the narrative down into bite sized chunks, director Fede Alvarez is able to break down each exchange into a series of inherent plot points punctuated by an interruption. That way audience interest is maintained and stories move along seamlessly.

However, because of that Calls starts to feel repetitive after a number of episodes as the format becomes familiar. Although the voice acting is exemplary throughout, this series is limited by an approach that some people might consider more of a gimmick than something more substantial.

Calls is available exclusively on Apple TV+ from March 19th.