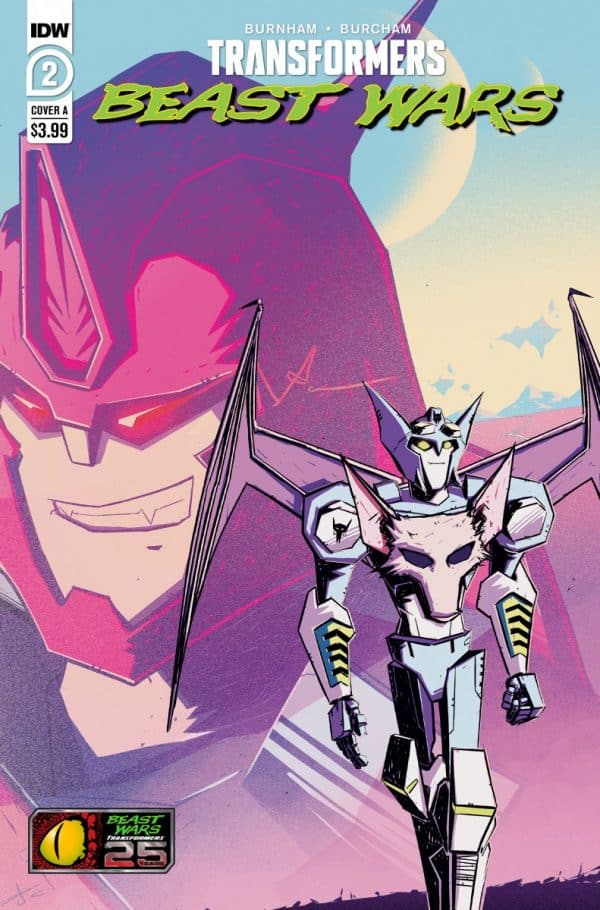 After the impressive first issue of IDW’s Transformers: Beast Wars, the second issue of Erik Burnham and Josh Burcham’s reboot builds off the intrigue of the story while playing around with familiar elements of the original Beast Wars series. From Burnham’s script and Burcham’s visuals, Beast Wars is proving to be quite an entertaining book, yes.

Whereas the first issue largely told the events before the Maximals and Predacons crashed on the planet, gaining their beast modes in the last few pages, Beast Wars #2 picks up fairly soon after that as the two factions begin settling into their new bodies and surroundings. There are plenty of character moments establishing the dynamic between the teams with Burnham mostly following their characterizations from the show, but he finds room to add in new pieces as well. Scorponok for example is quite the die-hard loyalist to Megatron. He’s still loyal to Megatron of course, but gets on the Predacon leader’s bad side with a nasty beating, showing he doesn’t know him as well as he did in the series. Dinobot and Tarantulas have a great interaction that not only shows the animosity between the two, but even has Tarantulas declare they all follow Megatron as a matter of convenience, foreshadowing the individual and secret projects he was prone to conduct behind Megatron’s back.

The characterizations are even more interesting when the new characters are thrown into the mix. Skold seems like a quiet Predacon and we don’t get too much of her in this issue, but Nyx is a pretty enthusiastic Maximal. Optimus Primal again shows he’s a bit more youthful and a fresh commander in his conversation with Nyx, yet is also practical with realizing they need a better lay of the land that their sensors can’t tell them. Burnham gets the voices for the characters pretty spot on, especially when it comes to Rattrap, Dinobot and Tarantulas. Burnham weaves in a lot of familiar aspects from the show, such as the mysterious floating islands in the sky and even Megatron’s rubber ducky. Most surprising though is his introduction of the Vok, the mysterious aliens who didn’t play a role until late in Beast Wars‘ first season. Burnham sets them up here with their combating interesting in the Maximals and Predacons and their need to keep whatever experiments they have on the planet pristine. It is very interesting with how Burnham utilizes the Vok and gives them more personality than they had in the show, making one wonder if they will play a more prominent role in the reboot. 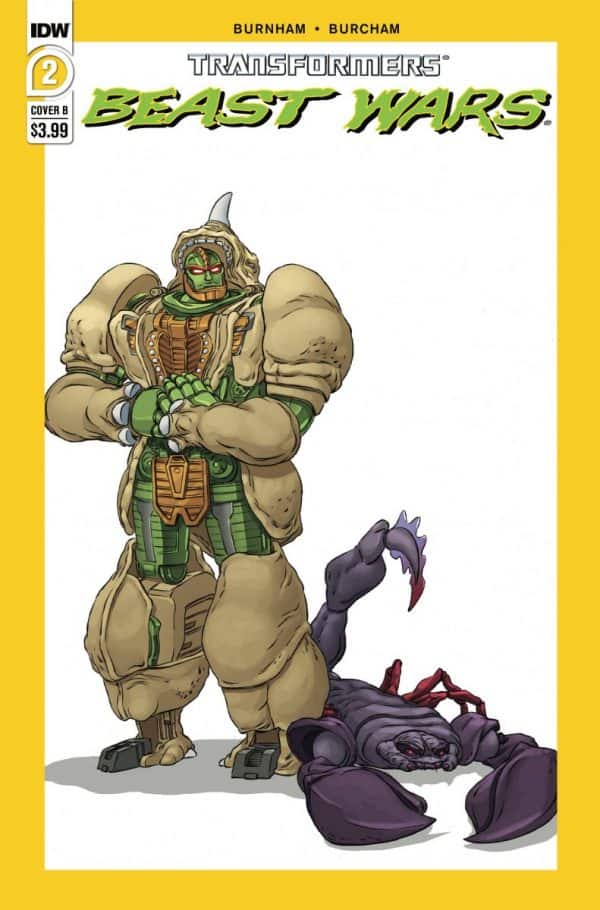 Josh Burcham’s artwork is very good as he adapts the designs of the cartoon into the comic, making the characters familiar while still putting his own spin on them. The brief action scene between Nyx and Terrorsuar is well illustrated, displaying a lot of animated movement as Terrorsaur flew after Nyx and transformed mid-air. Burcham’s colours are also very vibrant throughout the whole issue with a nice blend of lights, darks and several other colours. The darkness of the Predacon base makes the bots standout even more in their detail wile the black and white sequence with the Vok, leaving the aliens the only thing with colour, helped show how powerful and otherwordly they can be. Burcham’s art is a big selling point for this title and he is getting everything about the unique visuals of Beast Wars right.

Two issues into the series and Burcham and Burnham are already telling a nice reboot that honours Beast Wars for its 25th anniversary. There are plenty of familiar aspects, but neither of them are afraid to deviate to add in new parts to the mythology for new readers or to give longtime fans a fresher experience. It is definitely worth it to pick up Beast Wars #2 and join along for the ride.