Saint Maud star Morfydd Clark and Kingsley Ben-Adir, who plays Malcolm X in Regina King’s One Night in Miami, are among the all-British nominees for the EE Rising Star Award at this year’s BAFTAs.

They will compete against His House and Gangs of London star Ṣọpẹ Dìrísù, County Lines actor Conrad Khan, and Bukky Bakray, who broke out in a big way with her leading turn in the outstanding British drama Rocks.

The five nominees will take part in a public vote for the prestigious gong, which recognises an up-and-coming star of the big screen. Edith Bowman announced the shortlist via a live stream from the Savoy Hotel in London, accompanied by previous nominee and 1917 leading man George MacKay.

Bowman said it had been a “rigorous and difficult process” to narrow down the contenders in what has been a strong year for film, despite the effects of the global pandemic.

First won by James McAvoy in 2006, the Rising Star Award has been handed to many of the most exciting actors on the planet in the subsequent 15 years.

Last year, Blue Story star Micheal Ward won the prize and has since gone on to star in Netflix actioner The Old Guard, as well as the brilliant Lovers Rock instalment of Steve McQueen’s Small Axe series. All five nominees have had a terrific year, with many appearing in acclaimed movies that were able to reach an enormous audience via streaming services in the wake of cinemas remaining closed.

Ben-Adir said he felt “so lucky” to have been cast in the role of Malcolm X in Regina King’s One Night in Miami, which imagines a meeting between four iconic figures in the history of Black people in America.

He credited Jim Sheridan’s 2002 film In America, starring Paddy Considine, with inspiring him to enter the world of acting.

“I feel changed by the experience with [Regina King] for sure. One Night in Miami is a game-changer for me on every level,” said Ben-Adir. “Regina really allowed me to work properly for the first time in a leading capacity. It has taken 10 or 11 years.”

He added that it was “really special” to be a part of this list of nominees, praising their work and specifically noting the chemistry between the cast members in Rocks – even offering to play Bakray’s dad in a future movie. 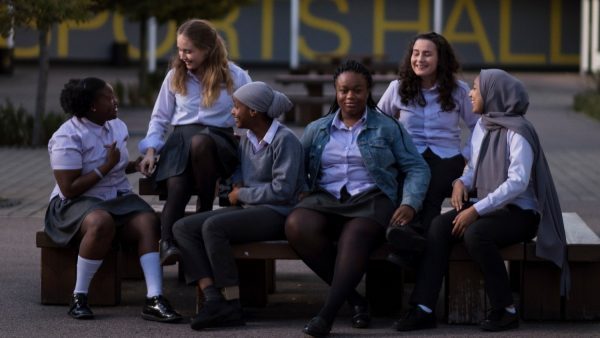 Bakray made her movie debut in director Sarah Gavron’s film as the titular teenager struggling to make her way in London after she and her younger brother are left behind by their mother.

“When it came to attacking the characters and performing, we were just acting on the things we had learned subconsciously,” she said. “I give all thanks to the women who were involved in the creative process, from the workshopping to having discussions around emotions and what it means to be a young person in Hackney.”

Bakray added she credited Jay-Z as her biggest inspiration, calling him a “go-getter” who is willing to “be a taker” in order to get to where he wants to be.

She added: “Before Rocks, I never really believed in dreams. I always say that the women in Rocks taught me how to dream.” Clark said she loved playing her role in Saint Maud, as she identified with the themes of loneliness present in the story of a devout Christian nurse whose mental state unravels throughout the film.

She added: “When I read the script, I feel that [writer-director Rose Glass] just wrote a character that was so complete it was quite easy for me to step into it. I didn’t feel there were loads of unanswered questions for me.

“It was heavy in terms of the content and what Maud was going through, but ultimately I felt quite relaxed because it made so much sense, what Rose had created for me.”

The star, who also appeared last year in The Personal History of David Copperfield, attended the announcement via video call from New Zealand, where she is currently shooting Amazon’s Lord of the Rings series.

When asked who her dream castmate would be, Clark said she’d love the opportunity to work with Bill Nighy, because “he’s just so twinkly and lovely”.

“It was really just about telling a story to the best of our ability and trying not to get weighed down by the horror and the subject matter,” he said.

He said the Rising Star nomination is a “wonderful vote of confidence” from the industry, regardless of who emerges with the prize after the ceremony.

Dìrísù added: “I am really proud of the film that we made and the topics that we tackle in it and I would love to be able to share that with as many people as possible. So I’m very grateful to Netflix, who have provided that platform.” Khan said “everybody needs film” and that he felt “privileged” that the movie world was one of the few industries able to keep moving during the pandemic.

On County Lines, in which he played a teenage drug runner, he said: “I was totally vulnerable, emotionally and physically, throughout the whole month of shooting and if I didn’t have that support group there, I don’t know if I would’ve come out the other end in one piece.”

Khan is currently embarking on a degree in film and said he has managed to work more in the past year than in the previous five, showing the strength of British cinema against the current adversity.

Public voting for the EE Rising Star Award is now open at ee.co.uk/BAFTA and the winner will be announced at the EE British Academy Film Awards on Sunday 11th April 2021..