There’s some cracking games coming to Playstation Plus on 6th April that will have gamers withstand Freaker Hordes in Days Gone and destroy zombie hordes in Zombie Army 4: Dead War.  Playstation 5 players will also be able lead a revolution in Oddworld: Soulstorm. 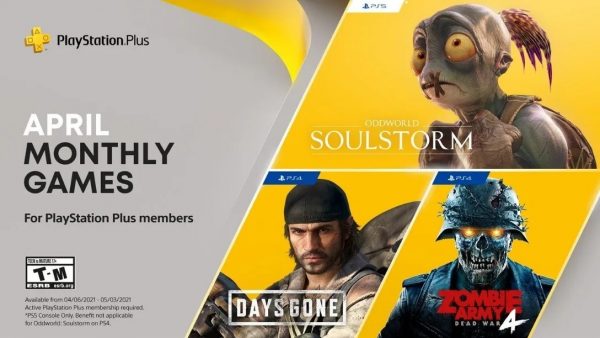 Starting with Oddworld: Soulstorm,  take control once more of the lovable Abe and set out to free his fellow Mudokons from slavery.  As players recruit more followers and liberate more Mudokons there’s the choice of either sticking to stealth and solving puzzles or scavenge to create an arsenal of weapons.  Many of the problems encountered will require Abe to use the assistance of the freed Mudokons if he is to get through them.   This title is available for Playstation 5 owners only.

In Days Gone, take the role of drifter, bounty hunter and veteran Deacon St. John as he travels a ruined world in search of his wife.  Journey on motorbike through hordes of mindless Freakers and insane humans and handle unpredictable weather at different times of day and night.  In a world where everything wants you dead it is vital to customise weapons and skills, craft cunning traps and upgrade your motorbike if you want to survive.

Finally, in Zombie Army 4: Dead War it’s time once more to fight Hitler’s undead hordes if you want to save the world from meeting the same fate as the Third Reich.  In this new campaign for 1-4 players go to 1940s Europe and use a variety of epic weapons to destroy abominable occult enemies and foil a deadly sinister plan.

All three of these games will be available to download from 6th April until 3rd May.  Oddworld: Soulstorm is PS5 only while Days Gone and Zombie Army 4: Dead War will be available for PS5 owners via backwards compatibility.