The beautiful game. It inspires fevered passion across the globe. Football (let’s not open this can of worms my US chums…it is football, the one with the round ball you might call soccer), it’s a communal experience that can bring out an array of reactions (some good, some not so), but the attention this gains around the world travels perhaps like no other sport. It’s unsurprising then that cinema has had a innumerable offerings focused on the game itself, of that fevered passion it inspires. Here are 10 Essentials…

The Goalies Anxiety at the Penalty Kick

Let’s start this game with a curve ball. This is curvier than a David Beckham free-kick, circa 20 years ago. This early Wim Wenders effort begins in earnest in the midst of a football game. Our titular goalkeeper gets sent off and leaves the ground, beginning an odd, languid road movie that is the kind of odd languid road movie which Wenders is synonymous with. It never portrays the passion that can come from football, with our keeper fairly impassive when we first see him on the pitch. What’s interesting though, is how the film meanders from potential sports film, into a drifting listlessness and then something darker, for our goalkeeper has a dark side and it results in murder.

Based on Nick Hornby’s hugely popular novel about the trials and tribulations of a Highbury Era Arsenal fan, this film does a great job in capturing the mania that can be attained through football fandom. Colin Firth is the fan whose love of Arsenal (Spurs fans need not apply) effects every facet of his life, not least his relationship. This was actually the first film I saw with Firth. He’s so synonymous with playing upper class, well educated or aristocracy that going back in retrospect just makes him feel slightly ill fitting in the part, even if he’s atypically engaging as an actor. This could be effectively remade, but feels more like you need a proper London working class geezer actor in the part. Though even die-hard Arsenal fans might concede, The Emirates feels distinctly gentrified and corporate in comparison to Highbury, in danger of becoming an elitist event arena (but you might say the same about half the Premier League now). Still, Fever Pitch also harkens back to a more evocative, impassioned era in football fandom, where mercurial flawed talents were worshipped on the pitch as heroes and season tickets were affordable. It’s a nice nostalgic shot in the arm for fans who began last century.

Blades (Sheffield United) fan and brewery worker Jimmy has the fanciful aspiration of becoming a professional footballer and his heart particularly set on playing for his beloved side. This is the movies, so of course that comes true, and not without some complications along the way. It’s a feel good film from a productive era for such fare in British cinema (The Full Monty came the following year). When I say Colin Firth doesn’t feel entirely genuine as a die hard gooner and one of the boys, the opposite is true of Sean Bean here. For one, he is really a fan (he’s become something of the celebrity poster boy for the club) and a working class background. As fantastical as the whole thing is, it certainly leaves a good impression. It follows the Rocky-esque sports underdog formula to a tee, but if you like football you’ll dig it. If you’re a Blades fun, you’ve probably got it on a perpetual loop. 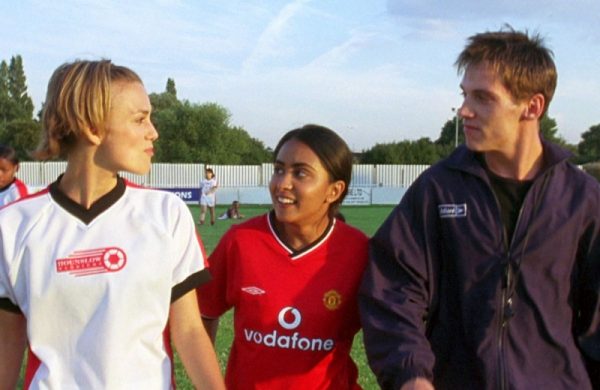 A young Indian girl with very traditionally minded Sikh parents is expected to lead a life on a path laid out before her. Find a nice man who can cook, become a doting wife, etc. Gurinda Chada’s film beautifully balances comedy with kitchen sink and offers an insightful look at multi-cultural areas of London. The generation of mixing vs the generation of evasion/exclusion, plus patriarchy and religion versus cultural and societal evolution. At heart, our protagonist just wants to play football. She begins excelling with the girls team. The film was made at a time where women’s soccer was largely dismissed or seen as a joke. So there is that to contend with but the added pressure of being young Indian girl going against her parents wishes. Chada does feel good with aplomb, and whether the subject is football or Springsteen, she captures the human story first and involves us emotionally.

Combine Kung-fu with Soccer, ramp up the comedy and have Stephen Chow (Kung Fu Hustle) direct and star. The result is expectedly wild. Prior to his major worldwide hit, Kung-Fu Hustle, Chow made this one. It’s got all the aspects expected of a martial arts epic and the elaborate set pieces, with soccer thrown into the mix for good measure. It’s funny, bristling with persistent energy and likeable performances, and understandably became a cult favourite.

Take Michael Caine, Sylvester Stallone and Pele (yes…Pele) and throw them into a concentration camp during WW2. As bristling rivalry between inmates and the Nazi overseers simmers, a ‘friendly’ game of football is suggested. This is The Great Escape with footballs and cameos from footballing legends like Bobby Moore and the aforementioned Pele. It’s highly preposterous, though not least for the sight of Sly Stallone bounding around as the kind of goalkeeper who makes Rene Higuita look refrained. John Huston’s film is complete and utter bollocks, but oh so much fun and the football set pieces themselves are impressively staged. Max Von Sydow is suitably reliable as the Nazi Major trying to keep the inmates inline. Meanwhile it becomes the will to escape versus the will to see the game out and defeat the Nazi’s. Freedom versus pride and one upmanship…they still escape, but you know…it’s the movies.

Ricky Tomlinson wonderfully personifies an amalgamation of dozens of iconic ‘old school’ British bulldog football managers from yesteryear. It’s smashing tea cups and foul mouthed dressing room tirades. No candy coating or arms around the shoulders with Mike Bassett. The film came at the beginnings of a turning point culturally among football management in the English Premier League. Foreign coaches were coming in and adding grace and new techniques and technological focus. Footballing philosophies were a thing, so Tomlinson’s wonderful caricature, even in 2001 was supposed to represent the dying breed (there’s a few still in the game who keep clinging onto the old ways). Mike Bassett: England Manager is a cult classic. It might not be a particularly great film for those not ‘in’ on football or the expectation that comes with every major tournament England participate in, but it sends up everything from maligned managers, the perpetually sly and negative press attention, and trying to deal with the more unstable mercurial talents who could make or break your tournament, or end up embarrassing a nation. There are many iconic moments in this and it still remains a favourite. It just screams of all too many England tournaments too, where expectation turns to derision, turns to hope, and if you’re lucky, a heroes exit. Central to that is the manager, and the maligned outnumber the lauded by some way as far as the England national managers go.

This British remake of American Football in prison flick The Longest Yard (which was also remade by Adam Sandler a few years after too) featured Vinnie Jones at the height of his breakout. Fresh from Lock, Stock and Snatch, and a few supporting roles in American studio films, Jones was made lead in a film boosted with Snatch and Lock, Stock pedigree from several cast members (not least Jason Statham) and Matthew Vaughn producing. It’s by the numbers but enjoyable, with Jones as a disgraced footballer locked up for match fixing. You have the standard prison drama elements of fearsome criminals ruling the roost, bent wardens and screws, in a place where violence and vices are rife. So it comes to pass that the tension between inmate and the screws brings an inevitable meeting on the football pitch, with Danny (Jones) having to organise a rag tag mix of questionably talented inmates (Danny Dyer among them). Predictable but enjoyable.

Michael Sheen seems to excel at enveloping himself into the guise of a real person. In The Damned United he’s given the big shoes of Brian Clough to fill, focused on his ill fated time as boss of Leeds United. If you’re not up on the back story it matters little, and though this could have been a film that have might alienated the unaffiliated, it ends up being fascinating because it’s a human story at heart with an interesting protagonist. Sheen does Clough very well, but injects enough authenticity to play him as a character and not a caricature. It’s skillfully directed by Tom Hooper, who sensibly keeps the drama at heart.

One of the most recognisable footballers who ever lived, would naturally prove a mesmerising subject for documentary. Asif Kapadia creates yet another enthralling film that will enrapture even those who don’t follow the sport. I was never hugely into Formula 1, but Senna was a superb and engrossing film. Likewise, Amy (about Amy Winehouse) proved a balanced and very interesting view on a flawed young woman fracturing under the weight of celebrity and vices. Once again, Kapadia doesn’t tell us Maradona is a saint, or a sinner, but merely uses his canvas to highlight the kind of awe he inspired, and throws glimpses on the mans God given talents on a football pitch. Even the most ardent old school England fan, still baring the grudge from ‘the hand of God’ could sit enraptured by this film focused particularly on his time at Napoli where he almost single handedly pulled an also-ran team to greatness.

What is your favourite football film? More importantly…England fans…is it coming home? Let us know on our social channels @flickeringmyth…