A coming-of-age psychological thriller that plays out the unsettling reality of a kid who holds his family captive in a hole in the ground. 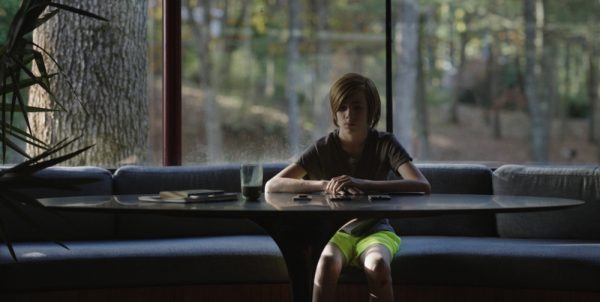 Early on in John and the Hole (also much before the titular underground hole in the woods comes into the picture, as the title card doesn’t appear until 30 minutes into the movie), the perpetually bored and distant teenager (played with absorbing amounts of creepiness by the talented Charlie Shotwell) is seen tossing a tennis ball up at the ceiling only to catch it when it comes down and throw it back up there again. It’s a repetitive cycle and one that annoys his sister Laurie (Taissa Farmiga), who is trying to focus on reading Alexander the Great for her book club. Naturally, she explains to John that it’s distracting and pleads with him to stop, only for him to respond that his mind wants to, but his body won’t let him.

Aside from serving as an ominous foreboding of sinister behavior to come, it also seems to function as one of the only real reasons director Pascual Sisto (and writer/frequent Alejandro G. Iñárritu collaborator Nicolás Giacobone, who also penned the short story the film is based on) has for the boy to act out disturbingly. There is a sense that maybe he doesn’t get enough attention from his parents (played by Michael C. Hall and Jennifer Ehle, respectively), with the former busy with work and the latter more focused on Laurie’s first boyfriend. However, there’s also nothing in the film that suggests how John could stray down such a dark path. As a thriller, John and the Hole is intriguing to watch but spectacularly fails when it comes to psychological insight and drawing defined characters. Basically, John grows tired of being around his family, concocting a plan to incapacitate them and drive them out into the woods, dumping them into a bunker on top of some bedsheets and pillows. He also decides sometimes to bring them food and occasionally visit (sometimes directly in their sight or outside of it), always refusing to say anything. Charlie Shotwell can express many emotions with facial expressions, meaning that there is also a palpable inner conflict over his actions, especially if he observes his family outside of their peripheral vision.

That leaves the rest of the movie, which mainly feels like a twisted version of Ferris Bueller’s Day Off, with John convincing his friend to get dropped off at the bus stop so they can hang out and play games for the weekend. They also decide to play a different kind of game, one inside a swimming pool, seeing who can hold the other underwater the longest right before they die, wondering if they will hallucinate anything at that moment. It’s uncomfortable behavior, but one that gets played up for incredibly dark humor, which turns out to be something the writing could have used more of. 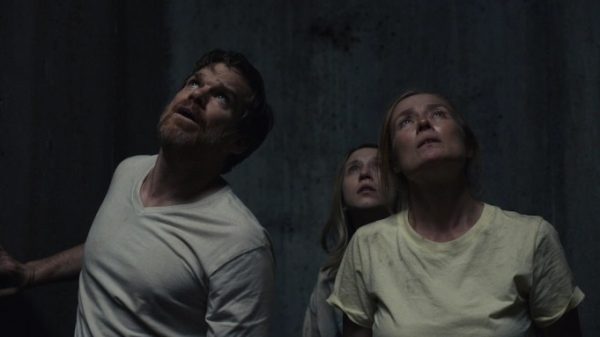 Far more interesting are the scenes from inside the hole with the rest of the family, as they quickly come to realize John put them there and try to figure out why, with varying reactions. Dad is more aggressive, threatening a punishment despite having no way to climb out; mom is in denial that her son would never do such a thing, whereas his sister seems to be the most rational and levelheaded of them. As they talk about amongst themselves, it’s revealed that John has been asking some strange questions that might further explain why he wants to be alone, but even that feels left wholly unexplored. A more significant issue is that these family moments are also unsuccessful when evoking any psychological engagement that would add depth to the narrative, more focused on survival, wondering when John will bring food next. It’s clear that John is afraid of taking on responsibility, whereas the rest of his family has forgotten how to have fun, but nothing gripping comes from that concept.

Most perplexing are interludes showing a mother telling the story of John and the Hole to her daughter. As the experience goes on, we understand why, although nothing about the subplot is meaningful or satisfactory in any way. It’s 15 minutes of extra fluff that could be cut entirely. With that in mind, there are now two pointless and relatively on involving stories being told in John and the Hole. Charlie Shotwell is terrific at conveying that the teenager is a frightening sociopathic monster, but that’s all the film has going for it.