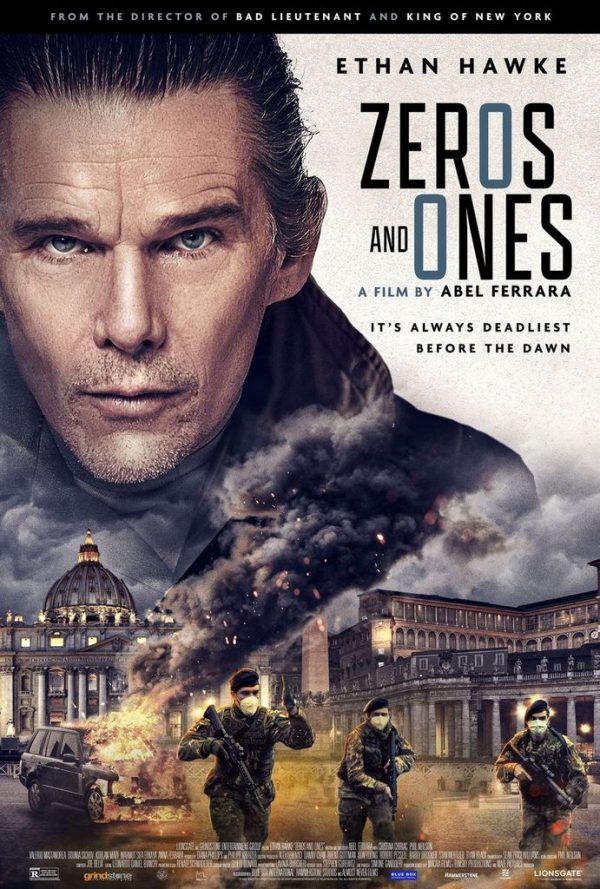 Called to Rome to stop an imminent terrorist bombing, a soldier desperately seeks news of his imprisoned brother — a rebel with knowledge that could thwart the attack. Navigating the capital’s darkened streets, he races to a series of ominous encounters to keep the Vatican from being blown to bits. 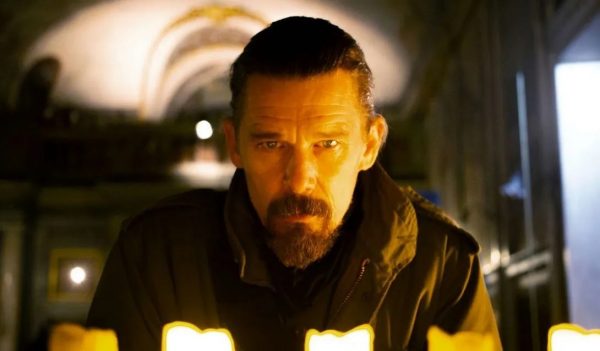 Oddly (although I suppose such a term is par for the course with writer and director Abel Ferrara), Zeros and Ones begins with leading man Ethan Hawke speaking directly to the camera. No, not his character; this is the actor himself briefly meditating on what it was like to work with the filmmaker during the height of lockdown within Rome while touching on how this is a bizarrely presented movie of the moment. The entire speech plays like one of those AMC greetings from the cast before an early promotional screening or first-look trailer, but in this case, seeing that Zeros and Ones comes from Lionsgate, I just initially assumed it was the distributor’s instructed method of informing blind paying viewers that they are about to witness something unabashedly unconventional and abstract to the core. Whether or not this plays into the narrative or themes at hand, I will leave you to discover for yourself, but it’s advised not to skip the ending credits. As for the specifics of the narrative, here goes nothing.

Ethan Hawke portrays an unnamed military soldier (although he is credited as JJ) called into pandemic Rome on the watch for a potential terrorist threat to the Vatican. Trust me, it’s a lot less exciting than it sounds (I will say that there is a tiny amount of action here, but not to expect much considering the budget), but the investigative proceedings work as a brooding, darkened, atmospheric all-nighter odyssey through a seedy political underbelly containing major players of various countries. Naturally, no one really seems to be prioritizing the well-being or on the side of our clueless antihero.

JJ encounters a mysterious mother and child that he appears to have a vested interest in protecting, seeks information from a mosque, at one point becomes embroiled in blackmail threatened to forcibly have sex with another woman as part of a twisted political game (the soldier holding JJ at gunpoint also happens to be played by Abel Ferrara’s wife, Cristina Chiriac), but is most presently concerned with unearthing whether or not his revolutionary brother is alive or dead. Also noteworthy is that Ethan Hawke also plays JJ’s brother during a few suspenseful flashbacks and is relatively captivating in the dual roles.

Putting it straight out there, Zeros and Ones is not a film that one comes away from once or multiple times with even a fundamental understanding of the characters and plot. Abel Ferrara works with his frequent collaborative grunge composer, Joe Delia, propulsively finding more thrills by allowing JJ and the audience to share in the paranoia of whatever corruption is brewing. Cinematographer Sean Price Williams also adds a stylistic touch with aerial perspectives, night and heat vision framing, and a grimy edge when it comes to JJs freedom fighting brother. With that said, it’s in that dynamic where Zeros and Ones come close to touching upon anything resembling emotional resonance. Such shortcomings would assuredly sink most films, although there is an unsettling urgency here as Abel Ferrara simultaneously confounds and beguiles. The ending itself, alongside its post-credits reveals, also had some intriguing recontextualization.