It may not have been the first of its kind, but when Die Hard came out, from the moment Bruce Willis entered the Nakatomi plaza, a new sub-genre all of its own was launched – ‘The Die Hard Movie’. None have compared, whether it was the sequels to the original, or big budget escapades like Under Siege (DH on a boat), The Rock (on Alcatraz), Executive Decision, Passenger 57 and Airforce One (on Planes), Sudden Death (at an ice hockey stadium) or Skyscraper (…back in a Skycraper) to name a few.

There have been innumerable big screen riffs. At the same time, through the video era up until now, many a B movie god, or even Sean Astin (Icebreaker… a.k.a. Die Hard at a Ski resort against a villainous Bruce Campbell) have delved into McClane’s territory. Die Hard on a shoe-string. Sometimes the settings aren’t as impressive, terrorists not quite as numerous, and not always benefiting from the best of the thesps as scenery chewing villain. If we’re talking the original trilogy and other big riffs, the likes of Alan Rickman, Jeremy Irons, Tommy Lee Jones, Powers Boothe and Gary Oldman have all played the villain with aplomb. So here’s a little run down and mix of a variety of Die Hard clones worth checking out: Dolph Lundgren’s had his share of run-ins with terrorists. He’s encountered them at Nuclear bunkers in Peacekeeper, which features a genuinely magnificent rooftop car chase, Roy Scheider as President, and Michael Sarrazin in fine villainous fettle. He’s encountered them at school in Detention (very little to write home about in this one), and he’s not had much luck in submarines either, running into them in Agent Red and Black Water (along with Jean-Claude Van Damme).

However, the best Die Hard Dolpher, Command Performance sees Lundgren at a rock concert. He’s got the atypical dark past. A former biker gang member, which explains his physique and penchant for fighting. Somehow or other, the 52 year old Dolph finds himself as drummer in a Nu Metal band of 20 somethings who play second billing to a Britney-esque pop starlet. It’s bizarre, and he ends up flirting with Britney-lite, in the kind of movie writing that a decade on is going to become extinct I imagine. Regardless, the sheer majesty of seeing Dolph playing drums and then using his sticks as weapons, as well as quoting lines like ‘Dying is easy, rock n roll is hard’ makes this a good time passer.

Pyu’ns film has a humble janitor having to take up the mantle of would-be-Willis (played by Linden Ashby). Despite the lack of budget there’s plenty of style and energy in this one. Pyun had a knack for injecting a little flair into his films given just enough money and a bit of inspiration. Everything is further aided by the presence of the late great Rutger Hauer. This isn’t a film many know off, but if you like the DH sub-genre it’s not too shabby. 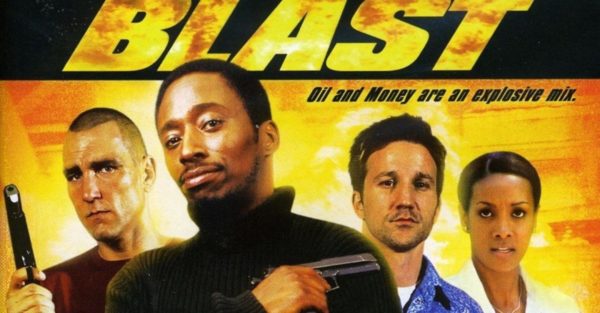 Hickox’s Blast isn’t quite as successful. The reluctant teaming of Eddie Griffin and Breckin Meyer (both of whom are more predominantly known for comedy, but play largely straight). Griffin as an action hero is unconvincing, as indeed is Meyer. That in theory could help, but in actuality, the turnaround from off duty beat cop, janitor, rock drummer or fireman, into world saver, needs to be convincing. Still the presence of Vinnie Jones, playing Vinnie Jones adds suitably hiss worthy villainy to the mix and there’s some nice set pieces too. It all benefits from solid direction from Hickox, who’s always been effective at constructing a decent visual, but never had much luck in his attempts to branch out from cult-horror.

Skyscraper with a large chest… no not that one: Remember Playboy starlet, briefly turned TV star, and even more briefly, movie star (probably most remembered for a fun cameo in Naked Gun 33 and a 1/3) Anna Nicole Smith? The late ANS starred in a woefully miscast, but oddly enjoyable, and subsequently cult film, Skyscraper. From cult action artistes, PM Entertainment (who ran throughout the 90’s in the video realm, and became a practice breeding ground for many of the best stunt men in Hollywood today) this isn’t one of their higher points. The presence of Smith lends the affair a certain so bad its good charm, from her stilted acting to her ropey fight sequences. Despite the inherent awkwardness of Smith, she, as with most of what she did, is oddly endearing.

SEE ALSO: PM Entertainment and the Art of Rip-offs With Razzmatazz

From Wesley to Cynthia, Plane to Supermarket: Director Kevin Hooks has something of an interesting track record as far as Die Hard riffs. He produced one of the better efforts which proved an excellent star vehicle for a pre-Blade Wesley Snipes, facing off against a scenery gorging Bruce Payne in Passenger 57. Still, that had a pretty lavish budget in comparison to what I’m looking at for this run down, so we’ll check Hook’s other Die Hard clone, Irresistible Force starring B movie action icon, Cynthia Rothrock (opposite Stacy Keach who provides the gravitas as a soon to retire veteran cop).

Whilst it may be a fairly routine TV movie, possibly lacking in the requisite violence and bad language it may have had were it a straight up video special, it is none-the-less an efficiently made film and Keach is typically reliable. Rothrock doesn’t get to do as much kicking as fans may have liked, but opposite a pro like Keach, she raises her game and gives one of her better performances.

Something with Eric Roberts: Because we’re talking budget versions here. A well worn action sub-genre. Another made for cable special. You want a reliable villain on a budget? You have several options (see also Rutger Hauer or Gary Busey) but here in Breakaway (also known as Christmas Rush), we have Eric Roberts to sneer at. He’s, as expected, on point as villain but to add to the surprising solidity of this Die Hard in a Mall special, Dean Cain is our hero and he’s reliably amiable.

Malls seem popular too for a Die Hard riff. See also the recent Antonio Banderas flick, Security or Paul Blart: Mall Cop…yes…I just mentioned Paul Blart…and when I say see them, make nod to them whilst scrolling but I wouldn’t bother watching Paul Blart: Mall Cop that’s for sure. If you’re gonna rip off Die Hard, why not throw in another action staple on top. That gives us the situation of Shadowchaser. A Nakatomi-esque plaza building which has been sieged by terrorists who have their own killer robot.

This one always used to catch my eye down the video shop with it’s very Terminator-esque artwork. A spiky haired cyborg played by B movie action man Frank Zagarino donned the cover. He didn’t quite get the cult status of a lot of his video action contemporaries of the era who broke out in the early 90’s. Perhaps he didn’t have the martial arts world title that backed up his action credentials like guys such as Don ‘The Dragon’ Wilson or Gary Daniels, though Zagarino still had one or two minor cult films under his belt (and a little more charisma at the beginning) including Barbarian Queen (think Conan with buxom women and wilfully large amounts of nudity).

His calling card probably remains the Shadowchaser series. The first sequel stayed within Die Hard formula, before the final two branched out (though the final, Orion’s Key seems like it may have been shot as stand alone and tentatively/cynically distributed as a fourth Shadowchaser). Though an overriding Zagarino recommendation is The Revenger which sees Oliver Reed absolutely, probably drunkenly, slumming it in a performance that flits wildly between utter disinterest and unabashed scenery chomping. Guy Pearce may have Die Harded in space with Lockout in 2012, however, no one watched it or remembers it much. It probably had a fair wedge spent on it too. A film which didn’t, but also sees one man taking on a terrorist group in space, is Velocity Trap starring Olivier Gruner.

Gruner at this juncture was carving out a fairly solid career as a B-level Van Damme. He made some enjoyable flicks like the Terminator-inspired, barmy action cyberpunk Sci-fi, Nemesis (directed in a way only Albert Pyun can direct such a film). That aside he made Savate, which introduced the video market to a certain Isaac Florentine (who would later direct Undisputed sequels and do his finest work with Scott Adkins), Automatic, Mercenary and Savage.

Low budget sci-fi specialist Philip J. Roth directs this one and it’s nicely put together. The low budget 1999 CGI has of course dated, but regardless, this is surprisingly fun.

So there we have it. A number of Die Hard inspired low budget specials to sink your teeth in to. What is your favourite budget Die Hard? Let us know on our social channels @FlickeringMyth…