An ambitious carny with a talent for manipulating people with a few well-chosen words hooks up with a female psychiatrist who is even more dangerous than he is. 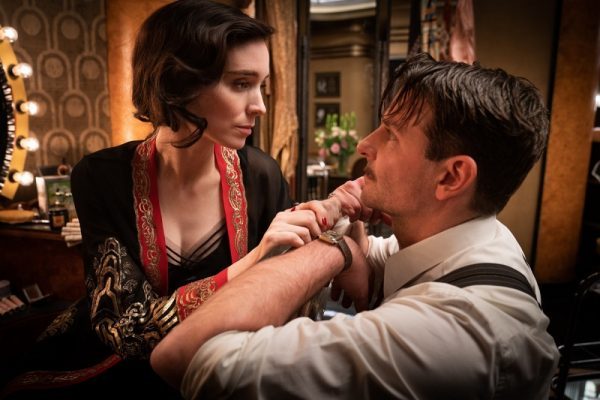 Guillermo del Toro has long dabbled in fantasy, creatures, and the supernatural, so it only makes sense that he would be drawn to a story about early 1940s Southern carnival grifters and their trickery. Adapting the novel of the same name by William Lindsay Gresham alongside screenwriter Kim Morgan (and technically remaking the 1947 translation to the screen, although this has been confirmed to follow the book), Nightmare Alley takes this freak show world and leans into mentalism not only inflicted on the paying customers, but the psychological games and inner torment they inflict on one another and the physical abuse often unleashed on hired workers for the dehumanizing gigs. Long-standing staples of the traveling show also have a creed not to make a horror show surrounding their acts. Whether it’s telling fortunes, tarot cards, electrification, or starvation, it’s agreed-upon to never give patrons hope through these exploits. It’s strictly manipulative entertainment. The same could be said for this twisty and crafty tale.

Bradley Cooper portrays Stanton ‘Stan’ Carlisle, a drifter heading away from a horrific crime and previous life. Naturally, the details of this mysterious past are illuminated as the story goes on, but the immediate aftermath brings Stan picking up work from Willem Dafoe’s creepy Clem at one of the aforementioned traveling carnival businesses. Such a place is also packed with quirky acts from a host of reliable character actors and Guillermo del Toro collaborators; Ron Perlman is muscle Bruno with a watchful eye over Rooney Mara’s Molly (performing an electrocution act in a manner that she can survive). Despite initially flirting with fake clairvoyant Zeena (Toni Collette) and trying to learn the verbal communicative cues of the mentalism act she and her now alcoholic husband Pete (David Strathairn) perfected, Stan pines after Molly, modifying her show into an electric chair for dramatic effect. That also gets to the point that Stan has no interest in holding back on these head games, curious to see how far he can take them for various personal gains, with or without the help of this crew. Upon meeting psychiatrist Lilith Ritter (a seductive and enigmatic Cate Blanchett), Stan comes into new opportunities to test out mentalism schemes. Naturally, a love triangle begins to brew as Lilith is more willing to go along with Stan’s unethical skill use, simultaneously berating Molly for occasionally missing verbal cues and questioning his cons. Fascinatingly, Stan also somewhat becomes a patient to Lilith, with the two bonding inside her office late into cold, snowy nights.

From the production design to the photography from Dan Laustsen (who recently worked with Guillermo del Toro on The Shape of Water), Nightmare Alley is a beauty. It’s a given that the filmmaker would have a blast obsessing over tiny details involving glorified magic tricks (as a result, the first act has a few pacing issues but is nonetheless majorly enthralling), but his direction and the sharp script from Kim Morgan are also riveting from a psychological standpoint. Some genuinely shocking moments arise here (including a burst of violence so unexpected I impulsively uttered “holy shit” under my breath in the theater) that while could be considered Guillermo del Toro indulging in madness for the sake of it, primarily work the more one analyzes and ponders the character of Stan. He sees people as marks and grows to become absurdly good at profiling people at first sight, with his deductions and reasonings (after he is revealed to be correct) turning out to be arresting to listen to in their cleverness. There is also a juxtaposition between his actions and the religious equivalent, posing the question of whether it’s all two sides of the same sinister coin (albeit a dynamic that could have been explored more). Of course, some of these targets are horrific individuals themselves (and played to nasty perfection by the likes of Richard Jenkins), meaning Nightmare Alley is an all-around slimy journey into some truly despicable behavior. However, it’s not without a cautionary element as anyone with a functioning brain will feel a nervous sensation that the jig could get blown up at any second for Stan. No matter how careful, planned out, and intelligent he is (and the film leaves room to question just how well he knows the ones he is manipulating or perhaps implicates delusions of grandeur/buying into his bullshit), his ambition will likely exceed his grasp. And even if it doesn’t, it’s always clear that Lilith could break his mental state wide open whenever she wants.

Cate Blanchett is outstandingly icy and just as mischievous, but this is still Bradley Cooper’s show. He has a line in this movie so hauntingly and twistedly delivered in pitch-black gallows humor context; it transcends the performance from great to extraordinary. Even with a telegraphed ending, the road Nightmare Alley takes to get there is filled with uncertainty, suspense, exhilarating violence utilizing practical gore effects, and devilishly captivating mind games anchored by an ensemble down for every nasty detour.