Tom Jolliffe looks at Nic Cage in The Unbearable Weight of Massive Talent, and compares with Jean-Claude Van Damme’s temporarily redefining role as himself in JCVD… April 2022 included a special day for me. It was something of an event. I got to see Nicolas Cage strut his stuff on the big screen. Maybe 10-15 years ago this wouldn’t have seemed entirely out of the ordinary, but as it happens, this was the first time I’d bore witness to Cage on a big screen showing since Kick Ass some 12 years ago. Such has been the gap, and a long dearth in him being in anything worth watching at a multiplex, that I’ve actually seen Jean-Claude Van Damme on the big screen more recently (2012’s The Expendables 2). That’s not to say of course that Cage hasn’t been producing stellar work among the litany of straight to video churn jobs, because Pig and Mandy are two of my favourites in the last five years (nay, probably this century to be honest), but those two didn’t find wide release in the UK.

I would have loved to watch Mandy on the big screen, but the realities of this would have meant spending £30 for a ticket into London on top of another £10 to get the cinema ticket, and hell it’s London, so why not grab a drink and some food? Sure. I love Cage, I was psyched for the film, but working in a likely £100 expenditure on the off chance I’d have free time to do it, was quite something else (especially with a then two-year-old to contend with too).  Pig wasn’t quite the trek, but the limited showings in my nearest major city, at the arthouse joint playing it, would still have been a costly affair, and very limited in choice to the few showings it had. 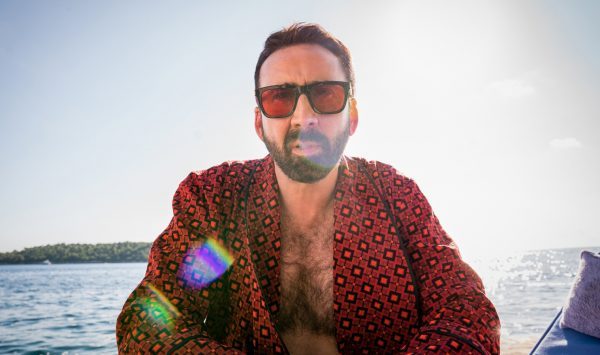 So as I sat down in my local mainstream venue (Vue), sticky floored, overpriced popcorn joint, largely filled with franchise IP, I was satisfied in the knowledge that I’d not had to spend obscenely, or go out of my way, to see The Unbearable Weight of Massive Talent. Frankly, the fact I was able to do this came as a surprise (I didn’t expect it to pop up at my local 6 screener). A midday Saturday showing ended up being a little disappointingly sparse in turnout. However our fellow patrons (totting up to a turnout of five, including myself and brother) made for a positive and responsive crowd, all of whom were thoroughly entertained.

Here’s an aside, and I say this under the knowledge that this Nic Cage comedy opus opened at a time when another highly rated comedy, The Lost City, is still out, but why don’t studios make big screen comedies so much any more? Okay, perhaps there’s several reasons, such as an innate 2022 era fear of being cancelled for one misfiring joke. Maybe it’s because Marvel, in its all consuming glory is also well known for heavily injecting humour and irreverent jokes into its canon. It could also be that an array of comedy stars are also finding some air time in the streaming world. Ryan Reynolds has just fired one over on Netflix for example. All told though, The Unbearable Weight of Massive Talent felt like a wonderful throwback to a time when studios weren’t adverse to high-concept comedy, and when you could go to the cinema for a film where laughter was the key objective. Playing an exaggerated version of himself, Nick (Fucking) Cage is riotously good. Whether he’s talking to his imaginary friend Nick Cage, or doing impromptu auditions for producers, or drunkenly singing an off the cuff song to his embarrassed daughter on her 16th, Cage is fantastic. He’s sent to attend the birthday of a mysterious and mega rich client and the two happen to get on like a house on fire. Then he encounters the CIA, is tasked with spying on his new besty and suddenly we’re in a yarn and a caper and our protagonist is Nick (Fucking) Cage. As said mega rich client, Pedro Pascal is just as brilliant as Cage. He’s so affably charming and loveable. As a pair, I don’t exaggerate when I say this might be the best double act in years. They gel perfectly together and create a kind of magic that gets close to Lemmon/Matthau, Pryor/Wilder, Mayall/Edmondson etc. It’s light entertainment, with enough genuine heart and sincerity to involve us emotionally, but above all, consistently enjoyable. It’s not even a prerequisite to be a Cage-o-file, but if you are, it’s as much fun as you’ll probably have in the cinema this year.

Actors playing themselves isn’t entirely a new concept of course. What works well about Unbearable Weight is the fact we get enough in-jokes that hit the spot, but plenty of general good humour that’ll entertain everyone. Cage is revelling in the complexity that even a caricature of himself inevitably brings. It references his career slump choices, his spending habits, his quirky sensibilities and even his Nouveau shamanic acting style. We take that and place him in a pot boiler plot with drug cartels, international intrigue and espionage, rather than perhaps going for a more straight up exaggerated bio pic. John Malkovich of course starred in a more surrealist approach to star as themselves, but Cage’s adventure really did bring to mind Jean-Claude Van Damme’s hugely surprising first turn as himself in JCVD. If Cage’s caper is a more glamorous affair with all the inherent intrigue of spies, agents and cartels, then Van Damme’s unlikely misadventure saw him getting embroiled in a Dog Day Afternoon scenario as he becomes a hostage in a post office robbery (but ends up being deemed the chief suspect). There’s something pretty effective about taking a formulaic thriller plot and placing a caricature of a star in the middle of it. Cage becoming a reluctant spy, and then essentially becoming an embodiment of his action era characters a little later on, definitely offers plenty of enjoyment. Van Damme meanwhile, far more tied to the action genre, and renowned for his physique and physical fighting exploits kind of goes the other direction. He’s not heroic. He’s just caught up in a real situation that can’t be solved by the fantastical jumping helicopter kick. A gun is trained upon him and though the weight of expectation from fellow hostages initially falls on him to live up to his on screen persona, it doesn’t happen. Still, the post office robbery plays out as a nice cog that allows us to see several sides of the titular Belgian star.

Like Cage’s references to his infamy, JCVD likewise references an array of things, like Van Damme’s dwindling career (losing roles to Steven Seagal), suffering finances, and some of his famed, and occasionally baffling philosophical ideas (“Aware”). Jokes aside, what both films manage to do is also show the human side to these characters. How closely they relate to the truth or not, the key to the respective films working on all levels, is in making the characters sympathetic, beneath the clowning or folly. This is typified brilliantly throughout JCVD, with Van Damme going through a difficult custody case, struggling to connect with his daughter, and in the brilliant one take monologue where he literally shatters the fourth wall by coming out of the top of the set to offer a heartfelt confessional (the majority of which rings true from Van Damme). With Cage’s version of himself, he’s recently separated from his wife, and struggling to connect with a daughter he’s often neglected. Nick Cage the character, has foisted his own wants and needs onto his daughter with an expectation that she’s just inherently like him. The truth is, he’s overlooked her individuality. It’s as simple as expecting she likes the same old movies he does, or for her to have the kind of artistic expressions and views as he. Look, the film is entirely predictable. That formulaic spy plot has expectedly formulaic twists and turns, but it’s the constant ability to entertain which keeps you locked in. The simple plot is merely a conduit for Cage to command screen, and for Pascal to more than match him, but respectively, both offer masses of pathos that elevate the perfunctory nature of the through-line. Through two great characters, beautifully portrayed, we are invested.

Ironically, JCVD’s ill fated Jean-Claude Van Johnson at Amazon, saw Van Damme play himself in a series where his acting career was actually a front for his work for a secretive government agency. That outline plays closer to the Cage one, but when it comes to a mix of comedy, hijinks and pathos it’s definitely JCVD which is the spiritual cousin, and furthermore Cage himself once name checked the film in an interview as something he found highly enjoyable and very surprising. Who knows if JC’s approach to playing himself had any baring on Cage’s approach. What are your thoughts on JCVD and The Unbearable Weight of Massive Talent? Let us know on our social channels @flickeringmyth…