Everything Everywhere All at Once, 2022. Daniel Kwan and Daniel Scheinert’s kinetic, crazy multi-verse movie Everything Everywhere All at Once arrives on Blu-ray with a solid line-up of bonus features and a code for a digital copy. It’s worth a blind purchase if the concept of the film appeals to you. 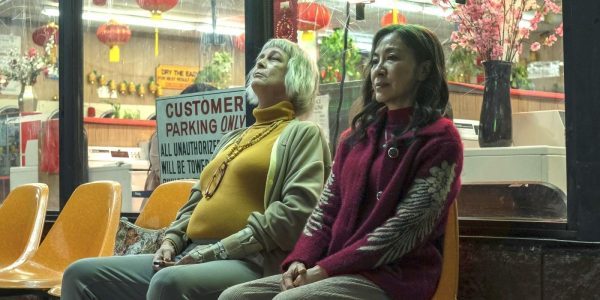 Superhero, sci-fi, and fantasy films may dominate the TV and film landscape these days, but there’s still room for fun, inventive movies like Everything Everywhere All at Once. Taking the idea of the multi-verse to its extreme, the film stars Michelle Yeoh as Evelyn Wang, a middle-aged Chinese-American woman struggling to keep her family and its business, a laundromat, going at the same time.

The business is being audited by an IRS agent, Deirdre Beaubeirdre (Jamie Lee Curtis), and Evelyn’s daughter Joy (Stephanie Hsu) is trying to get her to accept her girlfriend while Evelyn’s husband Waymond (Ke Huy Quan) tries to get up the courage to serve her with divorce papers. Meanwhile, her father Gong Gong (James Hong) is visiting and making various demands of her time. While meeting with Deirdre, Waymond is taken over by the Alpha version of himself, a more assertive incarnation from what he calls the “Alphaverse.” He explains the concept of the multi-verse to Evelyn, who learns that it’s being threatened by Jobu Tupaki, who was previously the Alpha version of Joy, whose mind splintered when Alpha Evelyn forced her to jump between multi-verses too many times.

From there, the film spirals (in a good way) into a dizzying series of multi-verse scenarios in which Evelyn is a famous movie star, a Teppanyaki chef whose co-worker has a raccoon controlling him (as in Ratatouille), and other personas.

Waymond has different personas too, and it turns out that Jobu has an ally in the Alpha version of another family member. Oh, and an everything bagel plays a large role in the proceedings too. If you’re confused, well, you just need to watch Everything Everywhere All at Once and see if you appreciate its “beautiful weirdness,” as Hsu says in the 40-minute making-of documentary that’s included on this Blu-ray. You’ll either love it, as I did, or hate it.

What really connected to me was the film’s exploration of family dynamics, which is the kind of personal thing that only makes a genre film better. If it was just about multi-verses, that would be one thing, but I really connected with the human element of the story. I guess it helps that I’m a middle-aged dad and husband too.

And how can you not at least appreciate Michelle Yeoh and Jamie Lee Curtis in roles that cut against the kinds of characters they’ve typically played in the past? I can’t imagine I would have ever expected Curtis as an IRS agent, and it was wonderful to see Ke Huy Quan make a major return to acting (yes, he was a kid in Indiana Jones and the Temple of Doom and Goonies). Daniel Kwan and Daniel Scheinert wrote and directed the film together (credited as “Daniels”), and they show up in that aforementioned documentary as rocks to explain their approach to the story. (It will make more sense after you’ve seen the film.) Other members of the cast and crew show up too for a nice making-of that goes a bit deeper than comparable bonus features on other discs.

The Daniels also appear in a commentary track that opens with them admitting they’re a bit wiped out from doing so many press interviews, which sets it up for a potentially tepid track, but they do a great job of talking through their approach to the film, how it came about, how they set up many shots, and much more. It’s definitely worth a listen if you enjoyed the film.

In addition to Almost Everything You Ever Wanted to Know About Everything Everywhere All at Once, there’s the ten-minute Putting Everything On the Bagel: Cooking Up the Multiverse, which digs into how the Daniels came up with not only the high-concept idea of the multi-verse but also where they pulled the family elements from. Moving on, we have:

• Alpha-Bits (11.5 minutes): Another featurette that breaks down how the visual effects were created for several scenes, along with some behind-the-scenes moments.

• Deleted scenes (14 minutes): The Daniels provide commentary for this string of excised scenes that play in the order they would have appeared in the film, including two multi-verses that ended up on the cutting room floor. While the commentary isn’t optional, the Daniels only introduce the scenes and give wrap-up explanations, so they don’t talk over everything.

• Outtakes (8.5 minutes): A big batch of bloopers and other mistakes that happened during filming.

• Music visual (2.75 minutes): A song set to a rotating bagel with everything.

The theatrical trailer rounds out the platter, and there’s a code included for a digital copy. Highly recommended.