Why do we do it?  Why do we punish ourselves so much, especially when we know the torment it’s causing?  What’s worse is when the object of such torment is the thing we love.  What is it they say, “What doesn’t kill you makes you stronger!”?  Is there a term for a game that makes you ‘Rage Quit’ and then just as quickly load it back up again?  If not there should be.   One written specifically for Gravitar: Recharged from Atari. For those that don’t know this Atari classic, and you’ll be forgiven if you don’t as it doesn’t come with the history like Pitfall, Yars Revenge or Centipede, you’re the pilot of a lone ship, whose mission it is to navigate strange planets, shooting gun turrets, aliens and reactors.  It sounds like a simple affair to be honest, with such a glib description, but when you throw in the fact you’re constantly battling against gravity, this once simple sounding game becomes one of the most addictive classics you’ll ever play.

Some of you may be thinking, ‘Hey this sounds a bit familiar to a game I played on the BBC Micro/ZX Spectrum/C64!’, and you’d be right.  That game was Thrust by Jeremy Smith and it owes an awful lot to Gravitar.  Now Atari, along with developers Sneakybox and Adamvision Studios, have brought this classic back to all current-gen machines and they’ve given this additive slice of gaming history a total make-over, or to go with the title they’ve totally “Recharged” it.  Gone has the classic look from both arcade and Atari 2600 and in comes something that’s smooth, groovy and a mass of silhouettes. Gravitar: Recharged is separated into two games Arcade and Missions.  It’s the Arcade, where you’ll want to start as this is “the game”.  Initially your arcade select screen will offer you a handful of options like disable shields or start with one life, but I’d suggest only messing with this when you’re an ace pilot.  Once you’re in you’re met with the starting solar system, like the original Gravitar.  However, in this Recharged version, you’ve got to follow the orbit of the planets to locate them, and with this you’re also dealing with both the gravitational pull of the current solar system’s star and stray asteroids to boot.  Also don’t take too long finding those planets, as the fuel you’re burning is at a premium.

Each planet has its own set of requirements to be fulfilled, before it can be classed as complete.  This ranges from the basic ‘activate beacons’ (hover near beacons for a set number of seconds), to a more difficult mission of manoeuvring through a cave network, destroying the planet’s reactor and getting back out in thirty seconds.  Every planet is guarded with either (sometimes all) laser cannons, laser barriers, UFOs, homing missiles,  and mines, while more reinforcements to the enemy arsenal appear as you progress.  Though you’re not going out alone, as you’ll find along the way – for a very limited time – weapon or ship upgrades.  Add to this a sparse number of fuel barrels dotted around, normally (conveniently) parked near a mine, and also life pods – though these, from what I can see, just seem to grant points. That and inner happiness of course. 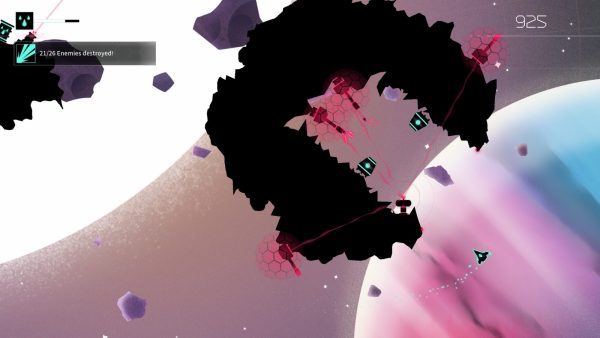 You have three lives to progress through each solar system.  Each life comes with a shield, so you can take one knock.  It’ll regenerate in a few seconds, but it feels like a lifetime when it drops off.  Once you lose all your lives, no matter the progress it’s straight back to the first solar system.  This here – for myself – was the major negative within Gravitar: Recharged.  I’d really fought, learnt, advanced and was truly elated when I made it to my second solar system.  Then when I died and didn’t get the option to return to the second one, I was a tad miffed.  Still, I got better and further the next time.

The second way to play Gravitar: Recharged is via the missions.  You get no solar system to travel through here, just individual named missions.  The first few are ever so slightly more difficult than the first solar system, so I’d really recommend the Arcade mode before arriving here.  You get one life, you can’t leave the play area and if you die it resets right back to the start.  You really need to know what you’re doing before you end up here.  I’m currently screaming through them, and these are excellent additions, especially when you find yourself a wee bit frustrated after bumbling in the solar systems one too many times.  There’s multiplayer mode, however this being local co-op only – with myself being a bit of a “Billy No Mates” – also having no second controller to rope in a family member, I couldn’t give this a spin unfortunately. 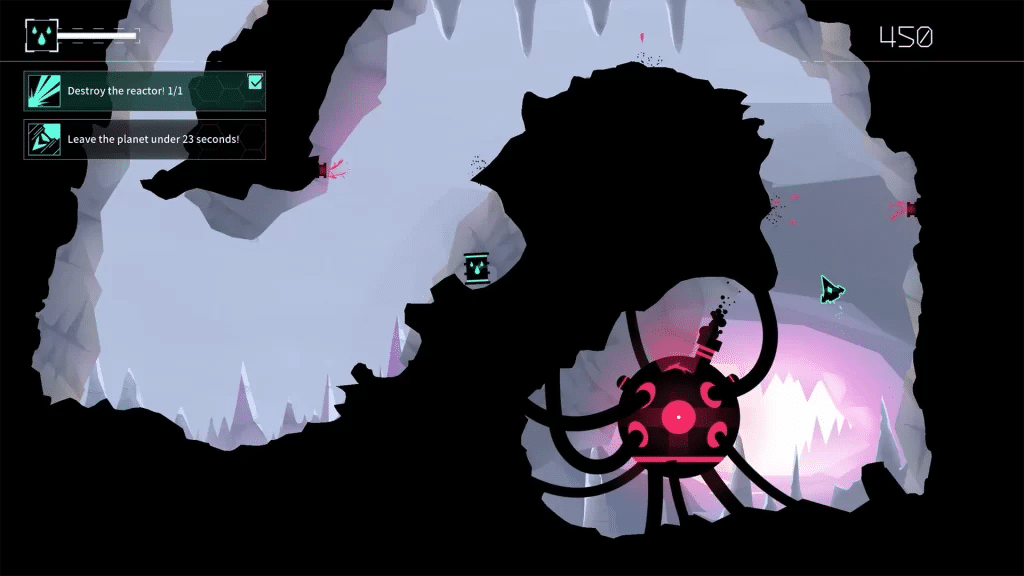 A major standout in Gravitar: Recharged is the look of the game.  To describe it would sound extremely simple and perhaps a touch bare, but it’s charming and perfect.  Each background shows a washed, watercolour-like picture of outer space, with either a sun or planet hogging most of the screen.  Then our active foreground is completely in silhouette, thanks in part to the brightness of the background.  To make our lives easier, everything that wants to do harm has a hint of red, whilst good is tinged in blue.  Then we have our utterly relaxing music from Megan McDuffee.  It’s needed to, as Gravitar: Recharged can get amazingly stressful and if you had anything other than the zen-like beats from our music master, this game would be too intense.  It needs Megan McDuffee to bring the chill down a level or twelve.

It’s fair to say I’ve been loving Gravitar: Recharged, even though I did spend the first few tries spinning my ship like a poor firework and I’m still occasionally rage quitting!  But I’m actually not really quitting due to the game, it’s more my own failings.  You see, you actually notice your skill level improve as you’re screaming around the alien solar systems.  You’ll be diving into orbit, taking out a shield generator, spinning a 180 degree turn, hitting a UFO and bursting a mine all one big thrust.  You’ll get that good.  So when you find yourself crashing into a cavern wall for the fifth time in a row…well it gets annoying.  I’d like to blame the game, but it’s all on me.  Then with the addition of in-game achievements and world rankings too, this wraps Gravitar: Recharged up with a nice neat bow, the whole game becomes perfect.  Granted it’s a highly addictive, rage inducing game, it’s still perfect neither-the-less. 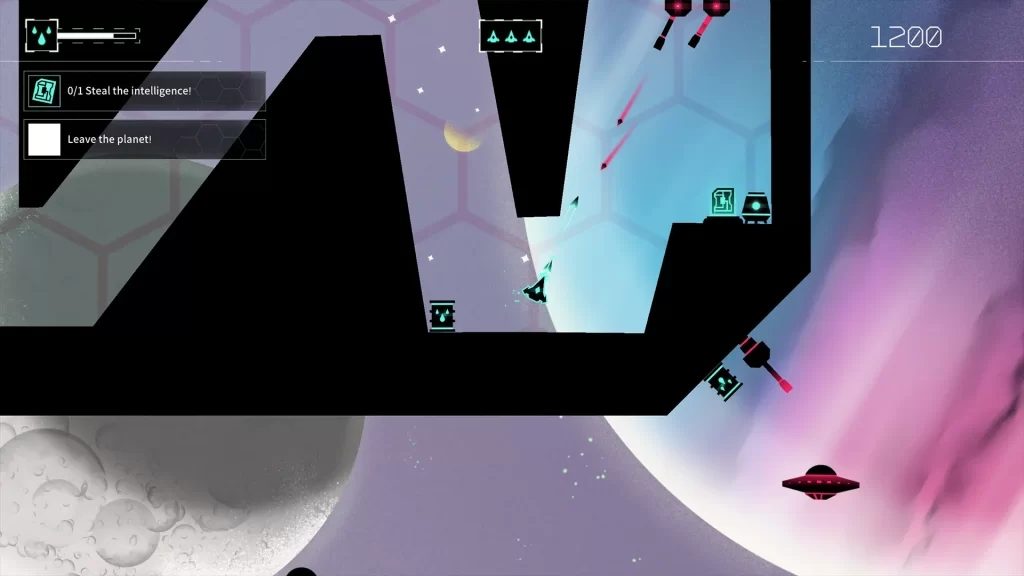 There is one thing however missing… I can’t find it hidden away, it’s not secreted in the credits, for I’ve looked.  It’s a shame the developers at Atari didn’t drop the original arcade release and/or 2600 version here, to show how far Gravitar has come.  Not only that, but it would have given some new gamers the chance to play the classics too.

Atari’s Gravitar: Recharged needs to be played.  It’ll test your nerves, but it will also reward you tenfold when your hardwork and earned skill finally delivers.  I absolutely adore it for it’s beautiful yet simple look, added to this the extremely mellow, chill-the-flip-out tunes.  Add this game to your library, just don’t be too critical of yourself when you spend the first half-an-hour acting like a damaged Catherine Wheel.

Gravitar: Recharged is available now for all current-gen machines.  This review was completed on the Nintendo Switch.  For more information visit the offical website here.