It’s the time of the month again when we reveal the Games with Gold line-up for August 2022 and there’s four new games for subscribers to download and play over the coming month.  Actually, that’s not quite true as the two backwards compatible games have been released on previous Games with Gold.   On the plus side, the Xbox One/Series X/S games look quite interesting and entertaining. 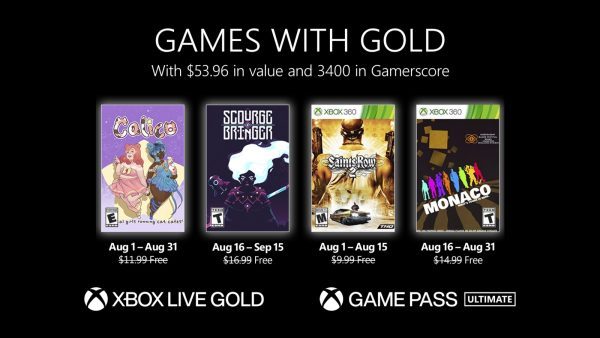 Throughout August subscribers will be able to download the charming sim Calico.  This entertaining and relaxing little sim will be a favourite with the cat lovers among us as players need to take over management of the town’s run-down cat cafe.  Players will need to create their character, create the purr-fect cafe for both cats and human visitors and ensure the business prospers with happy customers and contented kitties.  There will even be the opportunity to ride a giant kitty-cat to work.

From 16th August to 15th September it’s time to get into the thick of the action with ScourgeBringer.  This fast-paced roguelite platformer takes players to a post-apocalyptic world where they will fight through a continually changing dungeon as Khyra, a deadly warrior.  As Khyra, take on hordes of enemies and monstrous bosses to discover mementos of past adventurers and redeem all of humanity. For the backwards compatible titles, the first half of August will bring Saint’s Row 2 (which came to Gold subscribers in July 2020).  This second instalment of the Saint’s Row series has the player rebuild the gang and take back their territory from rival gangs and corrupt corporations while treating us all to the open world mix of violence and humour.

The latter half of August brings Monaco: What’s Yours is Mine, first arriving for Gold subscribers in September 2014.  This title gives players the opportunity to pull off the heist of a lifetime either solo or with friends.  Players will choose one of eight colourful characters with their own unique skill and sneak through a variety of locations to get the loot.