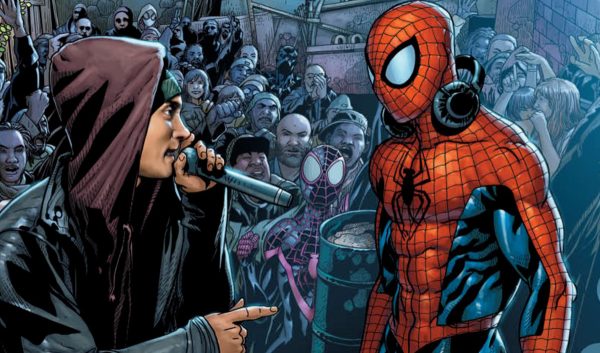 hustl. has unveiled a special limited edition variant cover for this year’s The Amazing Spider-Man #1 which pits hip hop icon Eminem against the Friendly Neighbourhood Spider-Man in an epic rap battle.

“I’ve always been a huge Spider-Man fan since I was a kid- he’s definitely in my top 5…. so being on a cover battling Spider-Man is such a thrill and an honor,” said Eminem.

“It’s truly an honor to be able to bring Eminem and Spider-Man to fans slinging raps on this official Marvel variant cover. There is no doubt that fans lucky enough to find themselves holding one of these will possess a highly sought-after collectible,” added Keri Harris, COO of hustl.

Check out the cover artwork from Salvador Larroca here… 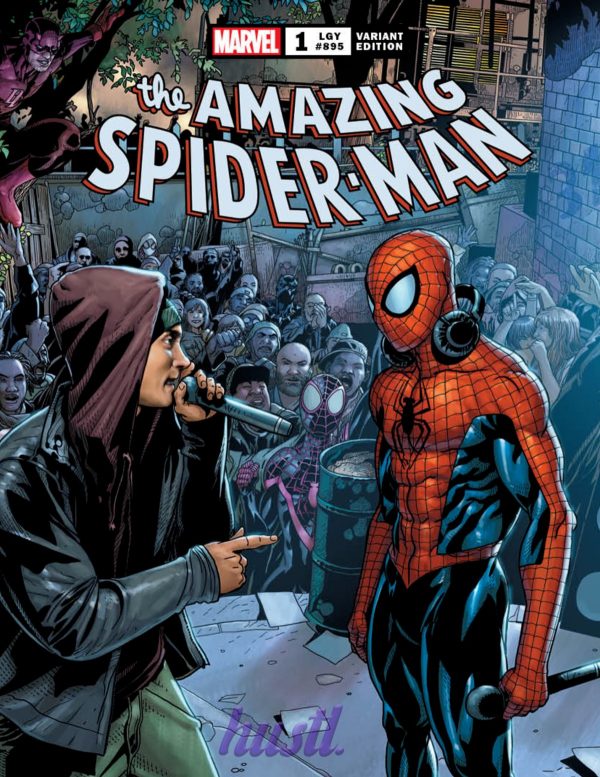 THE AMAZING SPIDER-MAN #1 marked the launch of a brand new series by Emmy and Annie Award-winning writer Zeb Wells (Robot Chicken) and one of Marvel’s most famous Spider-Man artists John Romita Jr. In this all-new ongoing series, Spider-Man is on the outs with the Fantastic Four, Avengers and Aunt May! No one wants to see Spider-Man- except for Doctor Octopus. Ock’s on Spider-Man’s tail and the Master Planner has something truly terrible planned for when he gets in tentacles on the Web-Slinger. While Eminem is not in the story or series, he will appear on this special variant cover as a limited edition collectible to celebrate Spider-Man’s 60th Anniversary. Eminem has been featured on previous Marvel covers including Punisher and Iron Man, and wrote the song “Venom” for the film Venom.