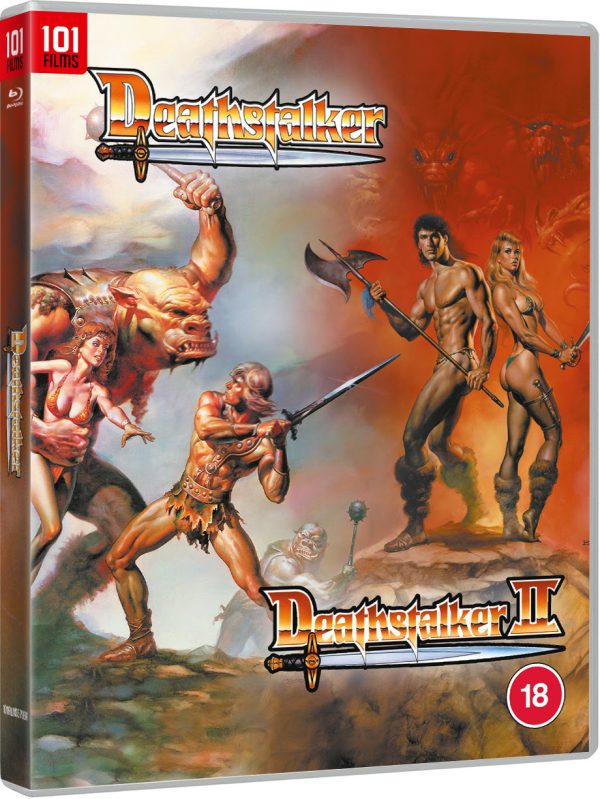 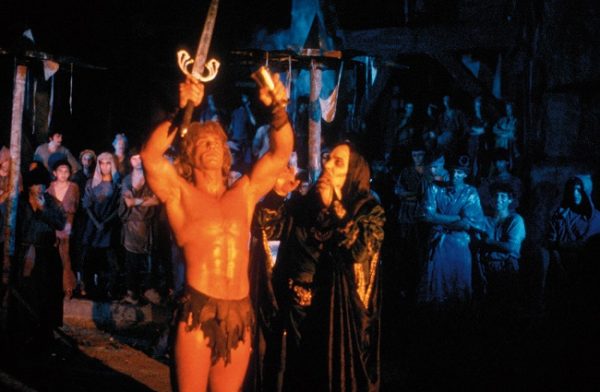 It’s time to strap on your loincloth, sharpen your steel and hail to the king (baby!) as 101 Films have blessed us with a gift from the gods in the shape of this two-disc set that features Deathstalker and Deathstalker II, two fantasy ‘epics’ that followed in the wake – and the success – of 1982s Conan the Barbarian.

But that movie had the talents of John Milius, Arnold Schwarzenegger, James Earl Jones and a host of others behind it – as well as a literary background – whereas Deathstalker has legendary exploitation filmmaker Roger Corman, the guy who played Jason Voorhees in Friday the 13th Part III and boobs – lots of boobs. 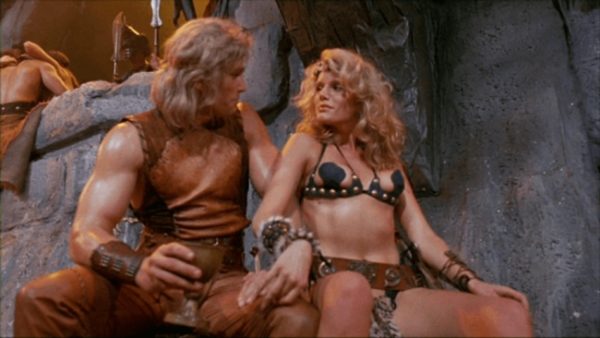 The titular character is played by Rick Hill – presumably because David Hasselhoff was busy – and roams the countryside killing ogres, goblins and all sorts of nasty creatures, stealing whatever he can and sexually assaulting pretty much every woman he meets; indeed, in the opening scene he rescues a fair maiden from the clutches of a gang of ne’er-do-wells intent on raping her, chasing them off and hacking them to pieces before returning to claim his prize, which she doesn’t seem too keen to award him. At first anyway, because he is the Deathstalker and no woman can resist, or something like that.

Anyway, much like Conan the Barbarian there is a quest element to Deathstalker as our hero must go to fight in a tournament at the castle of false king Munkar (Bernard Erhard), a sorcerer who has taken the castle from the real king, as well as kidnapping his daughter Princess Codille (Barbi Benton), whom Deathstalker must free. Along the way he teams up with fellow warriors Oghris (Steve ‘Jason Voorhess’ Brooker) and Kaira (Lana Clarkson), ensuring there is plenty of oiled-up action and nudity, before they get to the castle for the tournament, and Munkar’s welcoming orgy, so there are big echoes of Enter the Dragon too; imagine that – a Roger Corman-produced mash-up of Conan the Barbarian and Enter the Dragon. Well, imagine no more, folks. 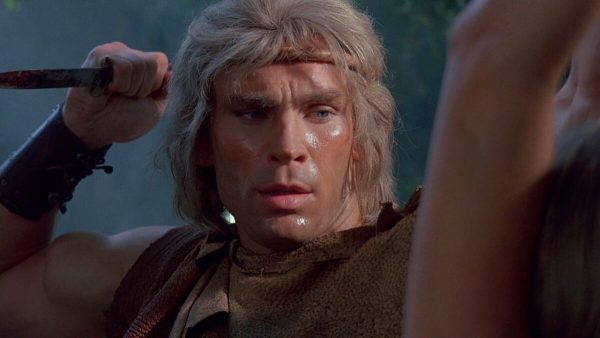 Featuring all sorts of rubber monsters, camp wizards, unconvincing witches, dubious sexual politics and pretty much everything you see in Conan the Barbarian but with less money behind it, Deathstalker is at once a load of nonsense and quite possibly the most brilliant thing you’ve ever seen, a combination that a lot of Roger Corman movies excel in but this one stands out, mainly because it happens to give you pretty much what is shown on the amazing poster artwork – something that not many fantasy movies actually did – and because it seems to know that it is as silly as we think it is.

So how could this nonsense possibly be topped? Well, despite its limited appeal to anybody who isn’t an adolescent boy, Deathstalker actually did quite well at the box office and on home video (of course it did – you can rewind and pause a video) and so in 1987 Roger Corman went ahead and made Deathstalker II, and if you thought the softcore lunacy of the first was daft you’d better strap in because this sequel doesn’t just go for laughs, it’s a Leslie Nielsen short of being the greatest spoof ever made. 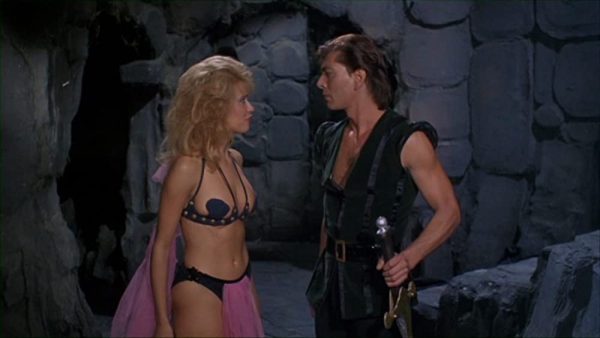 In this one, Deathstalker is played by the slightly less buff John Terlesky, who makes up for his lack of superhero bulk with a charming line in cheesy dialogue delivered with a Hugh Grant-like grin. Our hero teams up with Reena the Seer (Monique Gabrielle), a princess with suspect psychic powers who has been deposed and cloned by evil sorcerer Jarek (John La Zar). As long as Reena is alive then so will the clone be, but Jarek is working on a way to kill the host and keep the more subservient clone.

Reena wants her castle and title back, but first they must do battle with a tribe of female warriors – of course – that includes the fearsome wrestler Gorgo (Dee Booher) in a nice Rocky homage that hopefully Bill Conti or his lawyers didn’t hear as that would probably have wiped the budget out; in another scene, one character lifts not just a line but THE line from Goldfinger, so Corman and his crew were really going for the ‘homages’ with this one (and there’s also a bit of Indiana Jones in there too!). 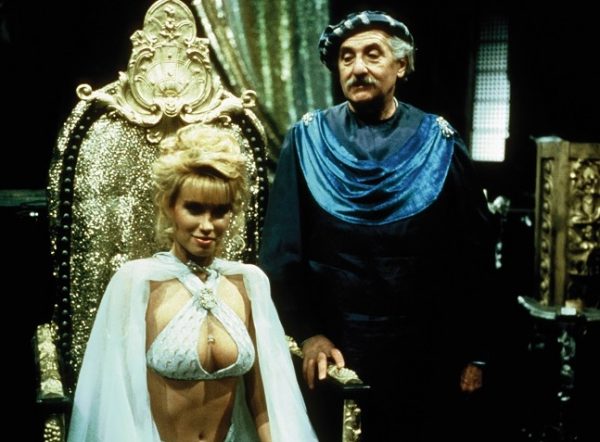 So yeah, Deathstalker II takes the sword-and-sorcery spirit of the original movie, cuts back a bit on the softcore sex (not much – don’t worry, there are still naked boobs every few minutes, even some re-used from the first movie) and relies heavily on the fact that everyone – in the movie and those watching it – knows that this is all ludicrous fun and we’re here to have a good time, and Deathstalker II is nothing if not a good time. Add to that slightly – only slightly, mind – improved production values (well, the camera isn’t quite so shaky), a known actor in John La Zar (you might know his face, anyway) and the director of Chopping Mall behind the camera then what is there not to love?

As far as Blu-ray collections go then this is up there with the best that 101 Films has put out so far. That isn’t to say that these movies are masterpieces, because they’re not, but they are tremendous fun if you’re willing to let certain things slide – put it this way, given the contentious content they’re not getting a 2022 remake, complete with updated attitudes and morals, because, quite frankly, who would want to watch that? 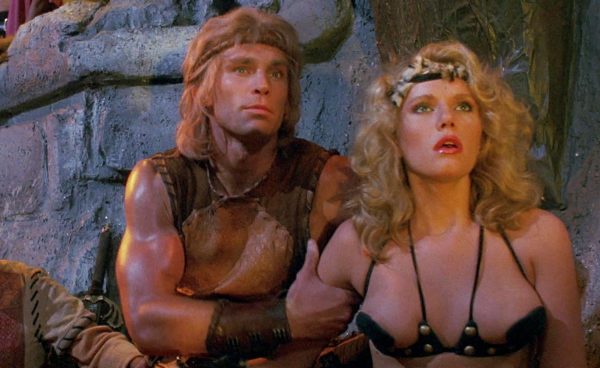 No, these movies are a relic of time gone by, when filmmakers like Roger Corman could make knock-off movies quickly and cheaply, when nobody cared who said what and to whom before they ripped each other’s clothes off, and when heads and limbs could be chopped off every few minutes using mannequins, an off-camera drop-kick and some tomato puree and it still looked more convincing than CGI, and what a glorious sight they are.

Both movies clock in at under the 80-minute mark so you can double-bill them in an evening, both contain audio commentaries from their respective directors and actors, and, hopefully, this means that we could get Deathstalker III and IV presented in the same way somewhere down the line, because it would be a shame not to have the complete set, wouldn’t it?