Olly Dyche on the deadliest dolls in movies… Let’s face it, dolls are creepy, and are the source of many audience members nightmares. There have been many horror movies that have tried to capitalize on this fear to great effect, producing many memorable, terrifying and utterly creepy dolls that are sure to haunt the minds of its audience.

From the likes of Chucky, Annabelle and that creepy clown from Poltergeist there is a whole heap of nightmare inducing dolls that will stay in audiences minds long after the movie has ended. With the recent release of the M3GAN, who isn’t necessarily too creepy, but boy is she deadly, what better time to take a look at cinema’s creepiest, deadliest and most memorable dolls. So without further ado, here are some of the best killer dolls in cinematic history… Slappy may not be the most innately dangerous or torturing doll on this list, but his creepy vintage design, maniacal voicework from the great Jack Black and his evil master plan makes for an unforgettably haunting doll. As the antagonist of both Goosebumps movies Slappy is a devilish mastermind, who conjured up a plan to let loose all of R.L Stine’s horrifying monsters that inhabit his books upon the living realm, making him one of the most intelligent and powerful dolls on the list. Although Jigsaw was the predominant killer in the Saw franchise (despite the amount of time he tries to convince audiences that he isn’t a killer), Jigsaw or John Kramer would often use Billy the Puppet to hide his true identity as well as creeping his poor victims out before being submitted to some gruesome torture.

Whilst Billy doesn’t kill anyone, the haunting little puppet instead poses as a catalyst to hide Kramer’s identity. Billy became instantly iconic, constantly posing the question “Do you want to play a game?”, as well as possessing His pale vintage face, sharp yet unnerving little suit and memorable red tricycle. If by chance you come across this creepy puppet, be prepared for the horror that follows. Forget about the disappointing 2015 remake and instead cast your minds all the way back to 1982s Poltergeist, or more specifically the undeniably creepy clown doll. What’s scarier than a doll? Yep – a clown doll. The imagery of this haunting clown doll simply just sitting on the chair is spine chilling, yet making things far worse and scary is that the doll is possessed resulting in a doll that will never leave the audience’s mind. Sure, his appearance may be short, but the clown doll in 1982’s Poltergeist nonetheless made a horrifying lasting impression on audiences. Possessed by a malevolent demon named Malthus, Annabelle is responsible for many of the evil hauntings that occur throughout The Conjuring series, and even has three movies in said universe solely centered around her. Her debut appearance in The Conjuring stuck with audiences, making fans eager for her return, no matter how downright unnerving it was. Annabelle is the definition of evil, taunting her victims with notes reading “Miss Me?”, unleashing a handful of the Warren’s deadliest demons that they have exorcized, as well as dispatching a few of her victims, mostly notably by bending each of Samuel Mullins’ fingers in ways that fingers should never bend. The very second the first trailer dropped for M3GAN, fans were instantly in love. Although being more of an android than an actual doll, her unnerving voice, twisted wiring and brilliant dance moves already cemented M3GAN as one of the best in the biz, way before anyone had even seen the film.

Now, with many witnessing the phenomenal flick, M3GAN has more than proven her worth, as she will stop at nothing to protect her friends, even if that means ripping someone’s ear off, or taunting her victim with some impressive dance moves before grabbing a paper cutter and slashing them to death. Watch out Chucky because M3GAN is coming for you! 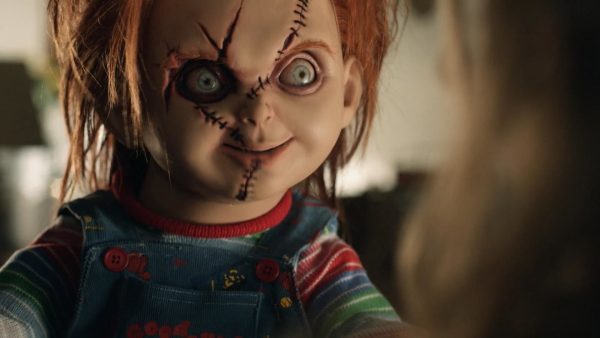 Of course the most deranged, psychotic and infamously recognisable doll comes in at number one. Possessed by serial killer Charles Lee Ray, Chucky has delivered some of the most creative and memorable kills in horror history. This evil good guy doll kick started a whole franchise that has spanned for over 30 years, with many great movies, a great TV series and some memorably odd installments that expand Chucky’s malicious and twisted story, The Seed of Chucky anyone.

Ever since 1988’s Child’s Play Chucky has tormented and killed his victims in viciously iconic and memorable ways, although being fairly easy to escape, it surprisingly takes a lot to actually kill this wicked doll for good. Charles Lee Ray’s spirit will always live on and there is no stopping it. Despite his murderous intentions however, Chucky is one of the funniest characters in horror, which makes him all that more memorable. Although M3GAN is attempting to take his crown as “the king of killer dolls” its going to take a lot for Chucky to be knocked down a spot, even if it will be a crossover of epic proportions.

Who are your favourite killer dolls? Let us know on our social channels @FlickeringMyth…