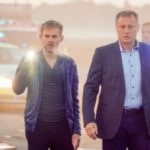 With just three weeks to go until its premiere, WGN has released a trailer for its upcoming crime thriller series 100 Code which stars Dominic Monaghan and the late Michael Nyqvist; watch it here… “100 Code” is a tense crime thriller, following the hunt for a serial killer who targets young, blonde and blue-eyed women, found […]