Action Lab Entertainment has announced that it will be bringing exclusive variants for Zombie Tramp #64, Aberrant #4 and Banjax #1 to this month’s Baltimore Comic-Con, which runs between October 18th and October 20th. Zombie Tramp #64 As she battles forces from all sides looking to claim, kidnap or kill her, Angel Lynch discovers that […] Action Lab: Danger Zone launches the second season of Rylend Grant’s Aberrant this Wednesday, and we have a preview of the issue here… CHAPTER 1: I NEED A HERO. As a wholly new and delightfully twisted story arc begins, David is forced to team with the man he hates most (and trusts the least) to […] Action Lab: Danger Zone has announced that creator Rylend Grant’s follow-up to his much-lauded action series Aberrant is set to launch this February with the release of Aberrant Season 2 #1; check out a preview of the issue here… Season 1 followed David Colbrenner, a U.S. Army Special Operations Commander whom, after losing his entire […] 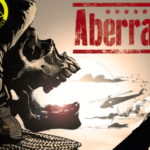 Action Lab: Danger Zone has announced the upcoming launch of Aberrant, an action series from prolific Hollywood screenwriter Rylend Grant (The Art of War, Drive). Check out a preview of the first issue here… David, a U.S. Army Special Operations Commander, distraught after losing his entire unit to a superhuman attack, wages an absolutely brutal […]