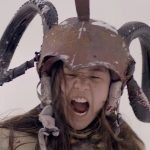 Ahead of its world premiere as the opening night film of the Fantasia International Film Festival later this month, a trailer has been released for the new dystopian thriller Polaris. Described by director KC Carthew (The Sun at Midnight) as “Mad Max in the Arctic”, the film follows Sumi, a young girl raised by a […]