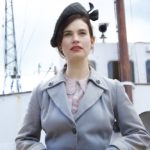 Red Stewart chats with composer Alexandra Harwood… Alexandra Harwood is an English composer who has been working in the film and television industries since the early-2010s. She is best known for her work on the nature documentary series Growing Up Wild, as well the drama film The Escape. Her latest compositions were for the Netflix original film The […]